CASA GRANDE HIGH GOLF: HOW SWEET IT IS 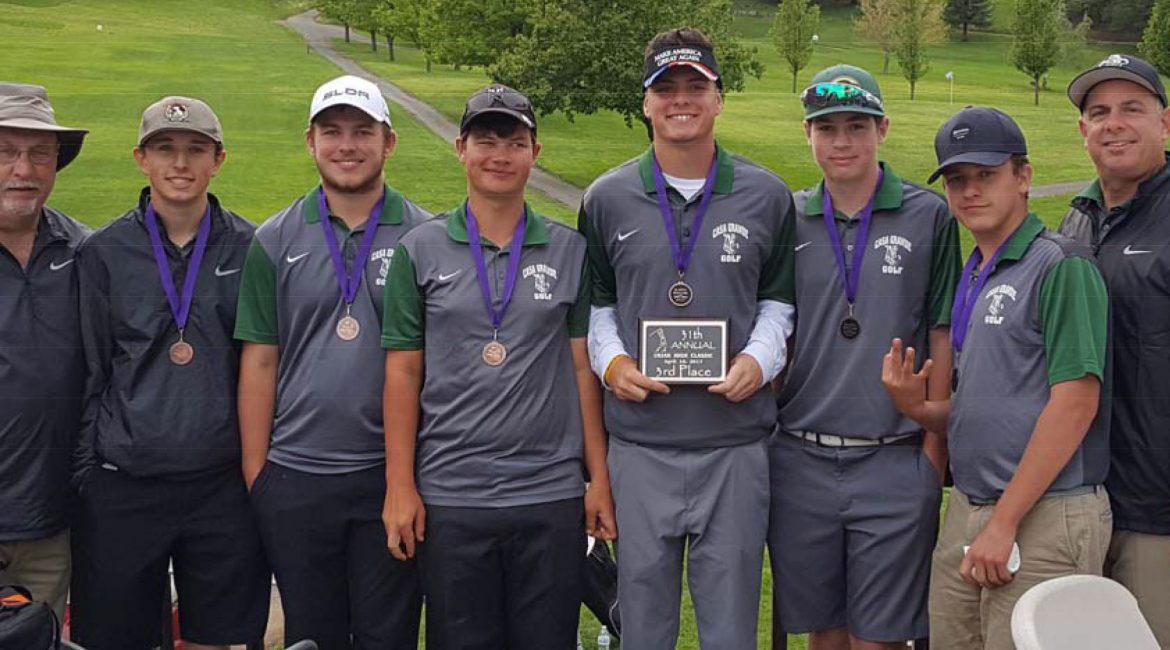 By Matt Schwab, 5/5/17
The Casa Grande High boys golf team sure has enjoyed the drive this season, thanks in large part to freshman Matty Mokski.


Mokski, who has special needs, has inspired the Gauchos with his delighƞul personality, work ethic, and a pretty mean
game of golf. He can play. On May 1, Mokski shot a season-best 83 to finish ninth individually and help Casa Grande earn
the North Bay League tournament title at Rooster Run Golf Club in Petaluma.
“He’s awesome,” Casa Grande captain Frank Gawronski said of Mokski, his popular teammate. “He’s almost like the soul of
our team and everyone rallies around him.”
The 16-year-old Mokski was part of an inspired team effort at the NBL tourney. Gauchos No. 1 Lucas Happy fired a 2-under
70 to earn medalist honors. The 6-foot-4 Gawronski, who also excelled in football and
basketball, took third with a 74. The Gauchos shot a season-best score of 407, nine
shots better than league champion Maria Carrillo.
Maria Carrillo earned the NBL’s automatic berth in the CIF North Coast Section Division
I Championship on May 15 at Chardonnay Golf Club in Napa, and the Gauchos
received an at-large berth.
How clutch was the Casa Grande performance at Rooster, on the heels of another NBL
victory at Fountaingrove Country Club on April 24?
“This one was a big one,” Gawronski said. “I feel like our whole team has just gotten
dramatically better.”
Sweetness just flows from Mokski. Sweet swings too. He shot a stellar 78 at Rooster in
practice last week. With developmental delays, including difficulties in processing information,
he has to work a little harder than most to stay focused, but the game of
golf has always suited him.
The Gauchos seem to appreciate everything about him. During long road trips to matches,
players enjoy singing along with him.

“Big inspiration,” Happy said of Mokski. “He’s always the one that has a smile and he always works hard. It’s great. He defi-
nitely cheers everybody up in practice and matches.”
“He’s one of the nicest guys that you will ever meet,” Gawronski added. “He’s really nice and sweet to everyone. For him to
be able to play so good in golf and find this outlet where he can connect with us … and our whole team has taken him in.
We’re always cheering him on in all the practices. He makes everything super-fun.”
The Gauchos made the big jump to the NBL four years ago, after winning back-to-back Sonoma County League titles. They
struggled a bit the first two years, but then Happy days arrived.
“When Happy came in and Frank Gawronski at No. 2, it kind of settled the program in pretty well,” Casa Grande coach Phil
Emswiler said. “Now it’s getting stronger. Of my top six players I’ve got three seniors, two freshmen and a sophomore.”

Happy, a sophomore, is an accomplished and well-traveled American Junior Golf Association (AJGA) player. He showed his
toughness shooting a 79 in a big junior tournament in Oxnard recently, overcoming a 104-degree fever the night before the
last round.
Emswiler marvels at Happy’s shot making and calls him the “real deal.”
“He’s very relaxed 99 percent of the time,” Emswiler said of Happy. “I’ve seen him do shots in practice where I’m amazed he
could get over the tree, but the tree was like 10, 15 yards in front of him and he had 90 yards to the green. I said, ‘the smart
shot here would be to bump it under the tree.’ He goes, ‘I can get over this. I can get over this in my sleep.’ He did. Flopped it
over the tree 90 yards. He’s got so much confidence in his game it’s amazing.”
Happy’s confidence comes in part from experience. He has spent a lot of time working on his game.
“I practice a lot interesting shots on the range because you never know when you’re gonna need ‘em,” he says. “Some of it is
boldness, just kind of ‘going for it’ mentality.”
Polished play aside, Happy and the rest of the team draw strength from Matty.
“He inspires us to not give up even if you’re having a bad round,” Happy said.