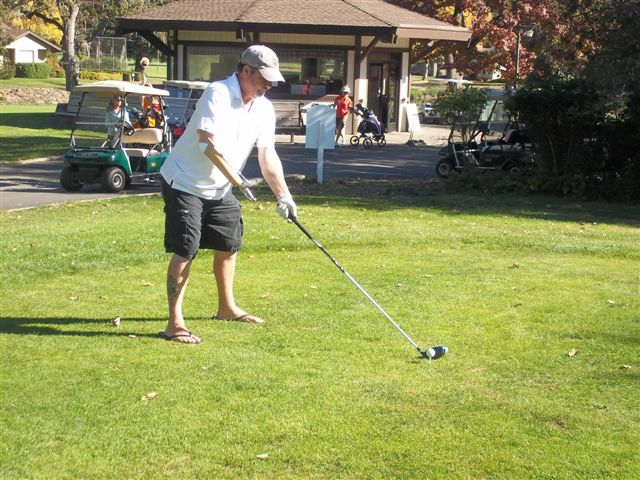 If you happen to meet Daryl Rossi on the golf course, and the topic of handicaps comes up, look at his golf game, not his right arm.
Or what would normally be his right arm.  Rossi, 53, was born without a right arm, the result of an undetermined birth defect possibly linked to his mother taking the drug thalidomide.
“My mom told me when I was born, the doctor handed me to her and said she had a beautiful baby boy who would never play baseball,” said Rossi, who works in fiber-optics Comcast.
The doctor didn’t include golf in his discouraging outlook, but if he had he would have been wrong on both counts. Rossi competed in Little League, and frosh, JV and varsity baseball at Montgomery High, playing outfield.
When he played Little League, he recalls his friends being protective, but that a few kids were thoughtless enough to call him “Captain Hook.”
“When I hit one over the fence, most of that talk stopped,” recalled Daryl, who said ironically his first team was the Pirates.
He attended Santa Rosa JC and made the baseball team, but because of an unfortunate family situation, he had to quit school.
Rossi started playing recreational softball for Total TV and when the boss of that company saw him play ball, “he said if you can splice cable as well as you play softball, you’ve got a job.”
Rossi, who has now worked for Comcast since 1980, remembers his first experience with golf, when his grandfather introduced him to it when he was 12.
“It was fun, but in those days, teen-agers were more interested in baseball and other things,” said Daryl. “He taught me golf etiquette and some basics but in those days, I just wanted to play baseball.”
He did take a lesson when he was 14 and the teacher suggested he tried swinging one-handed instead of trying to grip the club with one hand and a prosthesis. He whacked a driver 250 yards and that convinced him.  He “rediscovered” golf when he was in his 20s although he continued to play softball for almost 30 years.  When his competitive softball days were over, he turned to golf with the same passion he had shown for other sports.
“I’m a very competitive guy,” said Daryl, who said he took to the sometimes difficult sport quickly. “Once I got the driver down, I transitioned to the other clubs.” He said the toughest part of the game for him was learning to hit long irons. Daryl, join the club!
He said he used the same process that allowed him to hit a baseball when it came to golf.  His first handicap was a very respectable 15 and kept dropping.  Darryl played — and still plays — with longtime friend Joe Leitner, mostly at Oakmont East and West, where he is a member.  “Joe and I are good friends . . . he keeps me sharp,” said Rossi.
As is the case with most golfers, improvement slowed down and he hit a wall of sorts but his game slowly, consistently gets better.
“I recently shot two 75s on the West Course,” he said. “For a long time I couldn’t break 5 over.”
He admits, when he’s paired up with someone he has never met, and they see him hit a good shot, there is usually a look of surprise.
“But sometimes, when I hit a shot that’s not so good, they kind of act like ‘that’s ok,’ because of my arm . . . that bothers me a little,’ he explained.“I think some people try to visualize themselves with one arm and how they might play,” he said. “But generally people don’t’ know what to expect and they are pretty much blown away.”
Rossi has played in some events created for amputees but doesn’t particularly like that spotlight. “I was low gross for one-armed guys in a WAGA (Western Amputee Golf Association) tournament but I think I prefer just playing with regular people.”
Rossi lives in Santa Rosa’s Rincon Valley with his wife April — they married in 1984 — and his sons Dante, 21, and Vince, 26.  He plays a lot of golf at Oakmont, where golf director John Theilade calls him “an inspiration,” but frequents other courses, too.