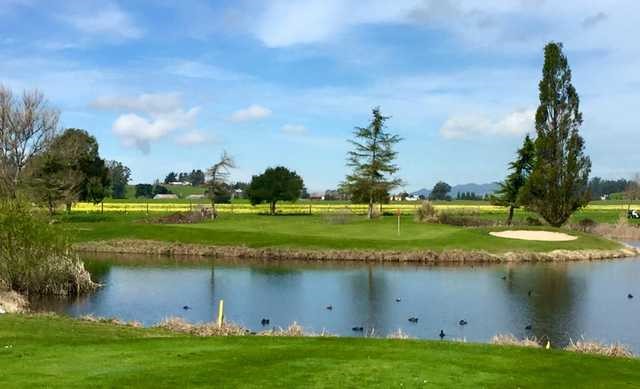 Rob Watson was working the snack bar and scrambling to deal with a lot of golfers in the pro shop at Tayman Park GC in Healdsburg when Charlie Gibson showed up to play a round in 1989.

“We were real busy, but I guess Charlie noticed something he liked,” recalls Rob.  “The next day I got a call from him . . . he asked me if I wanted to work for a great guy who pays well!”

If you know Gibson, you have no trouble thinking that’s pretty much how the conversation went.

Watson ended up going to work for Gibson at Windsor GC, Charlie’s place of business which had opened that year, working his way up to assistant pro and getting his Class A license in 1992.

In 1998, Rooster Run opened in Petaluma and Watson was named the head pro . . . he’s been there ever since, and this month celebrated his 30th year working for the Windsor-Rooster Run operation now under the auspices of Wine Country Golf Group.

“I didn’t realize I’d been doing this for 30 years,” says Rob, age 56. “But how many people can start and finish their careers at the same place?”

And Rob definitely plans on staying at Rooster Run, even though he has no doubt had offers to move elsewhere.

“I can see myself working here until I’m closer to 70,” notes Rob. “I may have thought about looking around when Charlie left (Windsor), but I can’t say I seriously thought about it.”

“Rob is probably the most dedicated, hard-working person I have had the pleasure of working with,” says Gibson, now located in the Sacramento area. “He’s great at his job, amazingly organized and just a good dude.”

He added that Watson is one of the main things he misses about Windsor and Rooster Run.

Rob graduated from UC Davis, majoring in Political Science and English.  He tried to play collegiate golf “but I found I couldn’t do that and keep up my grades.”

Rob’s family golf history runs extremely deep. His grandfather was the first president at Spyglass Hill and was instrumental in the creation of the course.

His father was part of a group responsible for getting Poppy Hills built.

Want more? Both his father and grandfather are past presidents of the Northern California Golf Association. Historic stuff.

“I was the worst golfer in the family,” he admits, noting that his brother John, is an outstanding player, having competed for UC Davis and once  finishing 6th in the NCAA Division II tournament.

Rob and his wife Cathy met at Windsor, Cathy recalling “we met in early 1991 when I started as a merchandising person and worked my way up to working in the corporate payroll offices.

“The defining moment of when I knew Rob was the one for me was when he was giving a golf lesson to a woman at Windsor,” recalls Cathy, who now works at Rooster Run.  “I’m not one to get jealous but seeing him in that situation threw me for a loop.”

They were married in August, 1996, and are proud parents of a son and a daughter, Ben and Robbie.

Bill Carson, director of operations for Wine Country Golf Group, says Rob was one the first employees he met when he took the job 12 years ago.

“He was warm, welcoming and nothing has changed,” says Carson. “I have been in the hospitality business my entire career (44 years), and Rob exemplifies hospitality . . . his greatest asset is his desire to please the customers and his employees.

Bill goes on to say, “Rob is always the first to say thank you for any consideration given to him or one of his employees and is a truly grateful individual,” adding “in the 12 years I have known him, I have not had anyone – customer or employee –voice a complaint aimed at Rob . . . he is a true asset to our organization.”

Jason Schmuhl, the head pro at Windsor and an outstanding golfer who  continues to leave his mark on the NorCal pro golf scene, says “Rob is a great guy and a great leader and always seems to do the right thing.

“He considers employees and fellow workers as family,” explains Schmuhl, an Analy grad and head pro who has been at Windsor for over 20 years. “I’ve learned a lot from him about management and consider him a good friend.”

Rob remembers the early days at Rooster Run, recalling how “the day before it opened I was sweeping the parking lot . . . we wanted it to look great.”

Since then the course has flourished, Rob noting “we have a game plan here and every year we try to make improvements.”

He explained that “I am proud of the friendships we’ve made and some of the first staff is still there,” like pros Marian Arcia and John Nice. Nice, an assistant pro, actually started at Rooster Run as a cart attendant.

One of Rob’s most ardent boosters has to be John Hutchinson, who met him 21 years ago.

“I was interested in starting the men’s club, and along with seven other gentlemen, we grew the club to over 200 members,” notes John, the club’s first president.

“In my role, I was able to work with and observe Rob and learn more about the incredibly dynamic person he is . . . he is extremely complex and he takes his job and roles as a son, brother, father, husband, mentor and golf pro very seriously.”

Continuing, John notes that “I have always been impressed how he has dealt with the many challenges he has faced over the years . . . he has learned to handle those difficult situations he has faced.”

John explained that Rob “has supported and encouraged the Rooster Run Men’s Club, the Senior Men’s Club and the Women’s Club as well as the Adobe Men’s Club, an associate group that plays at Rooster Run now that Adobe Creek is out of action.

Rob started the Monday Night Twilight League 13 years ago and he and John run that operation. John said that Rob “has used our league to raise money to support different programs in the area.”

Rob also started the “Range and Ritas” instructional program, which basically gets people involved in the game in a relaxed way, the Ritas (margaritas) simply adding to the relaxation.

General Partner Rich Coombs had this to say about Watson: “Rob has been with us 30 amazing years. He is a consummate head pro that is totally committed to making the customer have a great experience when they come to play golf. Rob works as hard as anyone I have ever known to create his team’s success .  I know I can call Rob day or night with a problem and know that problem will be fixed quickly and efficiently.”

Rob is obviously well-liked and respected and Rooster Run is fortunate to have a man like that running the show. He is pretty much what you want your head golf pro to be.

If you know of someone in the golf community you would like me to feature in GOLF 707, email me at bmeadows4sports@aol.com

Thanks again for comments, questions and suggestions. I love to get them and like to get as many as possible. If you have information about anything golf-related, including upcoming clinics, activities, tournaments or sales, please let me know. And if you have questions, complaints or compliments about golf in our area, I want to hear them.

If you know a golfer who you think would make an interesting story, tell me about it and I will take it from

there. Having trouble with your game? Let me know what it is and I’ll try to get an answer for you from a local pro.