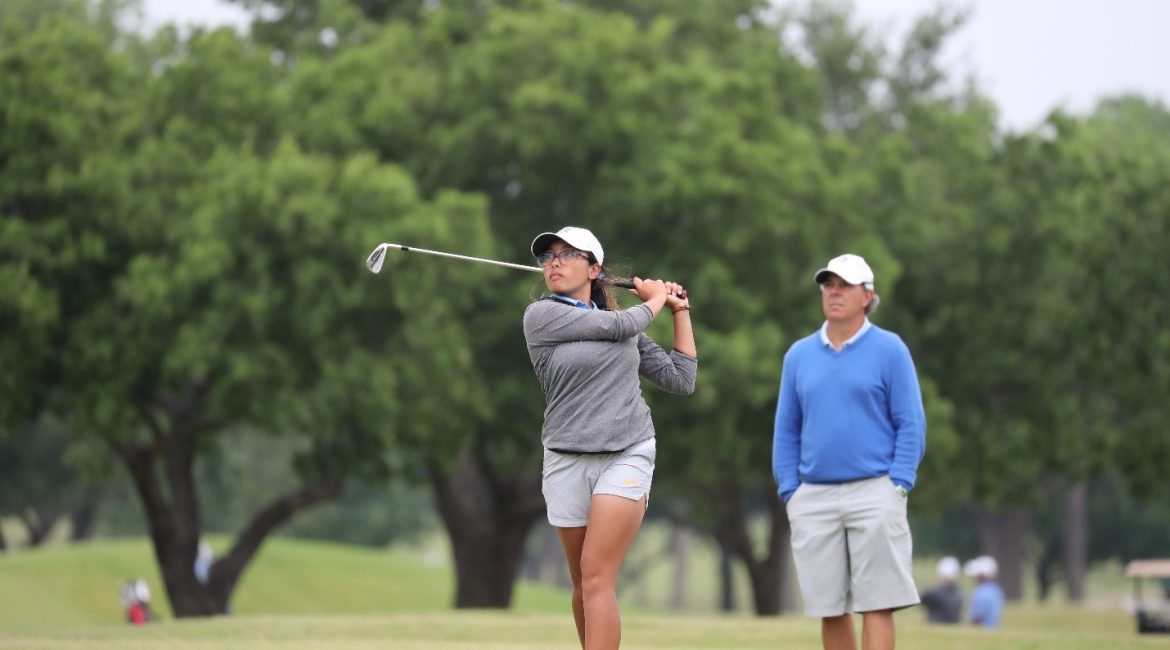 
Sonoma State’s men’s golf team has a national championship banner for its outstanding effort in 2009, but coach Val Verhunce is cautiously optimistic the team can rise to national prominence again in the not-too-distant future.
“We didn’t play that well in the fall, either the men or the women,” explains Verhunce, the only coach either program has known. Val started the men’s program in 2002 and the women’s in 2007. “We’ve had a tough time finishing tournaments.”
He said the Seawolves have either held a lead or been near the tournament lead, “then we lose ground” in fall events, known as the “non-championship” portion of the season.
But Val said practices have been going well and players seem to have re-focused on what needs to be done. He said the fact both teams had been in contention shows what they are capable of achieving.
“We have a lot of young players, especially on the women’s team,” says Val, noting five frosh and three transfers.
As far as both teams, he is looking for the players “to grow into the ability to take responsibility for their own games, on and off the course.”
Leading the way for the men has been Ian Hoffman, a junior out of Shasta High in Redding. “He’s been playing well and will be ready for the season.”
Other top players include sophomore Devin Gregg from Drake High in San Anselmo, Spencer Clapp, a junior from Decatur High in Federal Way, WA., and junior Dexter Simonds from Liberty High in Bellevue, WA. who leads the team in fall stroke average with a 75.0 in four events.
“The girls have a tougher road to get to the nationals this season – more competition – but they could do it,” encourages Verhunce.

Posting low scores for the women’s team have been co-captains Sabrina Virtusio, a junior from Carondelet High and Samantha Oliva, a junior from Presentation High in San Jose.  Another player to watch is frosh Lexi Nielsen from Mira Costa High in Manhattan Beach.
The men’s deep is ostensibly deeper, and as Verhunce says, “if you don’t have depth you have nothing.”
He admits winning a national title definitely helped the SSU program get exposure and draw some good players, “but you can’t sit back and wait for people to come.”
The men resume tournament play Feb. 5-6 at the Fujikura Invitational at Shadowridge GC in Vista, while the women return to action Feb. 5-6 at PLNU Reach event at Riverwalk GC in San Diego.
The women host a conference event at Sonoma GC April 15, while the men host a California Collegiate Athletic Association tournament at Foxtail April 2.
“Both the men and women could make it to the postseason,” says Verhunce, adding that neither made it last season, “and that’s definitely one of our goals.”
But always the optimist, Verhunce adds “these kids know what they are capable of doing and what they have to do to get there.”

He has one of the school’s – and conference’s — oldest rookies on the roster this season, but Santa Rosa JC golf coach Dave Herrington remains optimistic.
Herrington, in his 20th season leading the SRJC team, welcomed 10 players for the 2017-18 campaign although he lost two prospective players due to reasons arising from the terrible October fires, and one promising youngster from Thailand has opted to put off playing until next season.
But besides returning Max Morris, one of the top players in the Big 8 Conference (76.4 stroke average), Herrington will also have the services of Ron Myers, highly successful Bear Cub baseball coach who has served as interim athletic director at SRJC and is now retired.
Let’s just say Ron is old enough to vote, but does bring a wealth of golfing experience, and according to Herrington, “Ron has been playing a lot and shooting in the 70s . . . he has a real good chance of helping us.”
Herrington’s travel team for tournaments can consist of six players, and Myers could definitely be in that group.
As a sign on my wall reads: “I’m not over the hill . . . I’m on the back nine,” so good luck to Ron, a good guy.
Morris, from Drake High, got the next highest number of votes behind the conference MVP last season. Herrington says Morris has a solid game, but also has “a great attitude and helps other players,” adding “I can lecture but when a fellow player like Max talks, you listen.”
Other top players include first-year player Frank Gawronski from Casa Grande and Keaton Kithcar, a red shirt last year from El Molino.
“We have some new kids who I have only seen at practice, so I’m not sure how they will play in competition,” explains Herrington, who himself was an outstanding player at SRJC when the team went to NorCals as well as the state tournament.


The first tournament is the Brookside CC (Stockton) Invitational Feb. 5 and the first Big 8 event is Feb. 21 at Whitney Oaks in Rocklin. SRJC will host two conference events, both at Windsor, March 12 and April 11.
The NorCal Championship is May 7 at Dragonfly GC in Madera and the state tournament is May 14 at a site to be determined.
SRJC is in the Big 8 North along with five other teams, including Delta, which moved from the Coast Division to the North. To make it to NorCals, a team has to finish in the top three in its division. The top four teams from the NorCal and SoCal finals make it to state.
Herrington has an impressive postseason record, having made it to NorCals all but one season. The Cubs were second in the North last year.
“We didn’t make it to state last season, but had gone the previous eight years,” said Herrington, aided by an outstanding long-time assistant in former college and pro football star Brad Muster. “Our best finish has been
a third at state, but we were two strokes out of second and we missed winning one year by five strokes.”
There is no women’s golf team at SRJC, although there was one for three seasons, ending last year. The program was a victim of poor turnout, which is unfortunate for local girls hopeful of playing the game.

On Sunday, Feb. 5, Foxtail will stage its “Big Game Shotgun” event.
Check-in and breakfast is scheduled for 7 a.m. with a shotgun start set for 8 a.m.
The format will be a two-person scramble, which will allow golfers “to play some golf and be done in time for the game.”
Cost is $70 per player, which includes an American breakfast buffet, green fees, cart fee and two drink tickets. Cost is $60 for Players Club members and annual players.
You can sign up online at www.foxtail.com or call the golf shop at 707—584-7766. Participants receive a free sleeve of ProV1s in they register and pre-pay before Feb. 4.
Foxtail is also offering an Annual Pass Special, which normally sells for $1,400, for just $999. Deadline to take advantage of the offer is Dec. 31.
Other items of interest from Foxtail: The Sonoma County Amateur has a firm scheduled date of May 19-20; there is a golf bag special at Foxtail where if you buy any golf bag in the pro shop you get a free round of golf; Players Club membership is now on sale and $139 gets you $10 off every round plus you get one free round when you sign up.
As far as the course itself, Foxtail has newly renovated bunkers on the North Course. In all, 17 greenside bunkers were ripped up and replacement work done to improve drainage, including bunkers lined and new sand added.

Head pro David Solomon of Napa Valley CC in Napa has earned top honors as Player of the Year (Regular Division), and PGA Golf Director Shawn McEntee, formerly at Chardonnay GC in Napa,  picked up honors as Senior Player of the Year (ages 50-64) for the fifth consecutive year.
Shawn has participated in more than 30 PGA Tour events, including the 1989 and 1991 PGA Championship, the 1992 U.S. Open at Pebble Beach, the 2013 Senior PGA Championship and the 2014 U.S. Senior Open.

I appreciate those of you who have communicated with me and I want to hear more from you.
If you have information about upcoming events, sales, instructional sessions or anything golf-related, please let me know and I will get the word out for you to area golfers.
I also want to hear if you have complaints or compliments for local courses and golf businesses. Where do you like to play, and why? Are there courses you feel don’t deserve your business? Who do you trust to give you lessons? Where to you take your clubs when you need them repaired or regripped. What golf stores offer the best deals and back up what they sell?
I love writing feature items about local golfers and local groups. If you have any suggestions, send me the details and contact information and I will take it from there.
And if you are interested in sponsoring GOLF 707, like Bill Carson at Wine Country Golf does, let me know and I will send you details.
Email me at bmeadows4sports@aol.com