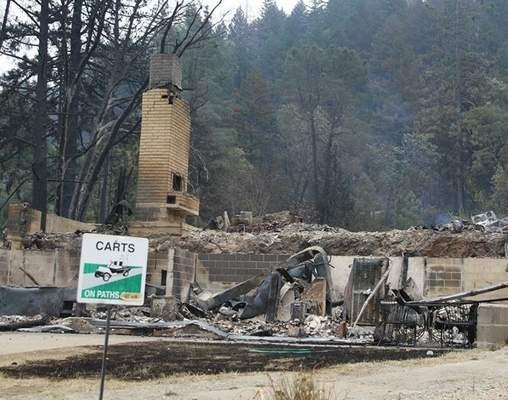 Thousands of acres have been burned, hundreds of people have lost their homes and other valuable possessions, including their animals, businesses – and the jobs that go with them – have been destroyed and the future is uncertain, challenging and downright frightening for so many.
So golf and golf courses take a distant back seat to the Valley Fire . . . in fact, golf and golf courses are not even in the same vehicle, let alone the back seat, when it comes down to looking at this terrible tragedy.
But people who love the game and have played and enjoyed the courses of Lake County have expressed a concern to me about the well-being of the facilities and the people who work at them.
When the fire started and the reports starting coming in about the devastation, loss of homes and loss of life, it was overwhelming, a situation I was unable to fathom, to wrap my head around.
As a longtime golf writer, I did at some point give some thought to the Lake County courses and the people who have jobs on them, and the golfers who will be challenged to play them again in the near future.
And when I started thinking about the golf facilities, my mind turned to John Berry, an excellent golfer and golf writer himself and the general manager at Adams Springs Golf Course, the Cobb Mountain facility that was hit hard by the fire.
John, who retired as a middle school principal in June of 2013 and then “started my second career” at GM at Adams Springs, said the clubhouse and pro shop at Adams Springs “are rubble.”
He was recently allowed a short tour with a small crew of firefighters dealing with the blaze within the golf course property.
“The area south of the golf course that would include the old Hoberg’s Resort and a community that includes close to 100 houses on Summit Road and Venturi Drive looked like it was hit by a bomb. Most of the houses were burned to the ground with only portions of chimneys remaining.
“The ground was smouldering in many locations and the only visible signs of life were five horses still in the area. In some of the roadside ditches, there were hardened streams of molten steel and aluminum, probably the remnants of some of the burned out cars that were evident.”
John said the Cobb Community Church at Summit and Highway 175 was burned to the ground, Adams Springs lost its pump house in the fire “and even if the staff could get to the golf course, we wouldn’t be able to water.”
John, still the golf coach at Kelseyville High, and his wife live on Buckingham GC, about 12 miles from Cobb. Buckingham was spared any fire damage and is open for business although play has been down.
John said Hidden Valley Lake, the only 18-hole course in the area, had major damage to more than 60 homes in the main subdivision as well as more than 40 in the Rancho Subdivision but that the pro shop escaped the fire.
Riviera Hills in Clear Lake Riviera, reports John, “has been suffering from conditioning issues the past few years and probably only average 20 rounds a week,” adding that portions of the first and second fairways have been replaced by wine grapes and fig trees.
Two miles south of Adams Springs on Highway 175 and Golf Road, just beyond the town of Cobb, sits the old Hoberg’s/RobRoy Golf Course, purchased by the Moore Family Winery earlier this year, according to John. The course has been renamed Black Rock and while the nine-hole layout was not damaged by the fire, Beau Moore, one of the owners, lost his house.

John said Highway 175 road closures have made it difficult if not impossible to make it to Black Rock GC.
Lake County’s sixth course, Langtry Farms, is “a seldom-played Tom Weiskopf designed course that opened about four years ago,” according to John. “It’s owned by Guenoc Wines and the two principal owners seem at odds over the direction of the course.”
John said the private facility, located at 22000 Butts Canyon Rd., in Middletown, “is maintained by a small maintenance staff, has no necessities such as bathrooms, water, etc. It’s pump shelter housing its electronic watering system burned to the ground and this will greatly impact its crews ability to water and maintain the course during this recent hot spell.”

ON THE BALL
About five years ago, Santa Rosan John Lienart came across some logo golf balls he found interesting.
And following the “one thing leads to another” process, Lienart began looking more closely every time he went in a pro shop.
Now the retired Morgan Stanley employee has almost 3,500 logo balls, from all over the country, all over the world, part of a golf ball collection that numbers close to 5,000.
“I get them from all over, including local sources like Bennett Valley and Fairgrounds and Strong’s Golf,” said Lienart. “I end up with lots of dupes so I trade them online.”
And while John has plenty of logo balls, he said he plans to keep on looking and adding to his growing assortment.


PRO GOLF IN NAPA
Pro golf returns to Silverado Golf and Country Club in Napa Oct. 15-18 when the Frys.com Open comes to town. But Tiger Woods, who had committed to the PGA event, will not be there after having two back operations this past week. The tournament director had predicted attendance to be doubled with Woods on the scene, but now even though the field is a good one, with golfers such as Justin Rose, Rory McIlroy and Hunter Mahan, crowds are unlikely to be as large as anticipated.

GOLF FOR GIRLS
Abbey Algiers, who writes for GirlsGolf.com, has come up with some suggestions for young women golfers, although the advice would be good for any golfer, male or female.
1. Practice makes perfect: There is no such thing as an overnight success and you get better through good, old-fashioned practice and hours on the range and putting green. So put in the effort and reap the rewards.

2. Good shots and bad shots: Don’t get upset about bad shots because they are a fact of life. We make mistakes and hopefully learn from them, so if you’re having a bad round, keep your chin up.
3. Being a good sport: Adversity reveals true character, so don’t throw clubs, swear or have a bad attitude if you’re having a bad day. How you react to bad situations makes you the kind of person people respect and admire.
4. Attitude is essential: Golf is based on etiquette, which boils down to respecting other players, the game and the course. The honor system is a great guide that dictates how golfers should play. It all comes down to respect – for others, your surroundings and most importantly yourself.

Let’s Hear From You
We are always pleased to get golf-related items from pro and amateur golfers, something you feel might be worthwhile sharing. Maybe a funny or significant thing that happened to you on the golf course. And if you have and event or activity coming up you want to publicize, let us know.
Also, if you have any news about local players who are doing well at the collegiate level, let us know.
And finally, we are always looking for sponsors for GOLF 707 on ysn365.com. We’d love to hear what you have to say.
golf707,lake county golf,sonoma county golf,wine country golf
Share