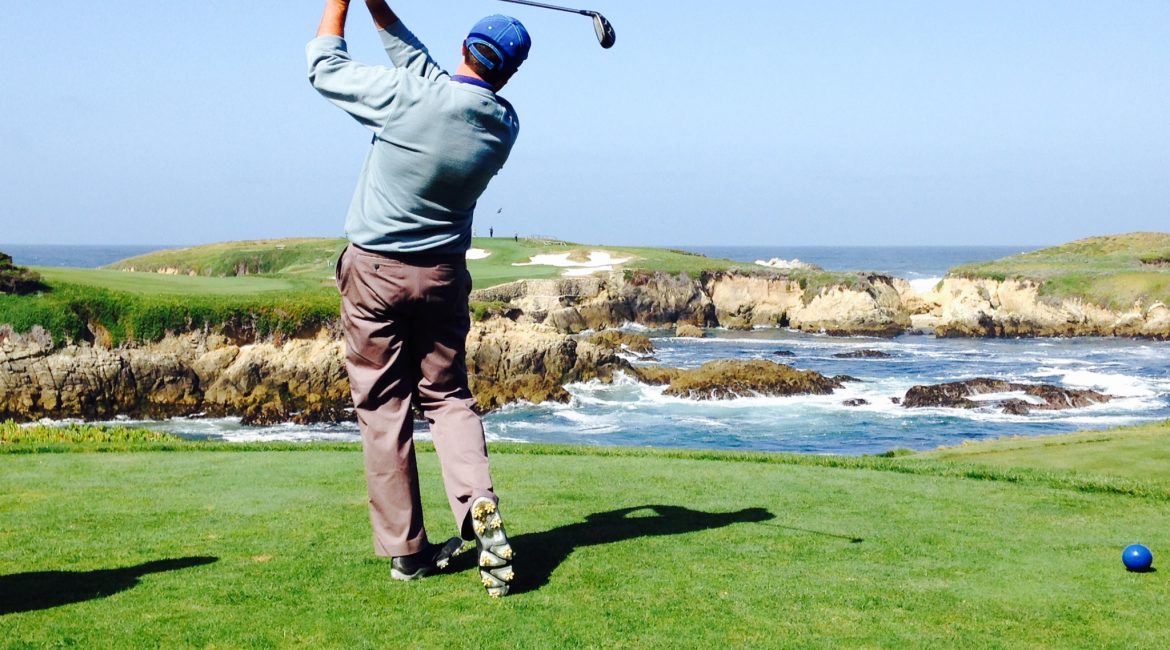 There was a time when Jason Schmuhl was understandably in awe when he competed in a pro golf tournament with some of the biggest names in the game.
But times have changed for the 45-year Windsor golf pro, who has qualified for next week’s Safeway Open at Napa’s Silverado North Golf Course, the first scheduled event on the 2018 PGA Tour.

“I’ve definitely gotten more comfortable over the years,” said Schmuhl, a standout player at Analy High, Santa Rosa JC and University of San Francisco. “I was very nervous at first.”
Schmuhl recalls playing in the 2010 PGA Championship at Whistling Straits, going to the driving range and coming face to face with Tiger Woods and Sergio Garcia.
“I ended up watching them hit instead of hitting balls myself,” recalled Schmuhl.
When Schmuhl tees it up Thursday, there will be a lot of big names, such as Phil Mickelson, Zach Johnson, Tony Finau and Webb Simpson as well as last year’s winner Brendan Steele. All four rounds of the tournament will be televised on The Golf Channel.
When he goes to the first tee at the par-72, 7,203-yard North Course, he will also do so with the memory of once shooting a course-record 63 during an NCGA event seven years agoat Silverado.
“That was a great round, but I really don’t think I can draw much from that,” said Schmuhl, who got his degree in Marketing from Sonoma State in 1996, turning pro a year later. “A lot has changed.”
Schmuhl will enter this year’s event – he missed the cut by three strokes last season – with mixed feelings. He said he hasn’t been able to practice much but at least he’s healthier.
Last year, when he shot 72-73, 145, he played the first two rounds with a broken hand, even though he didn’t realize what was wrong.
The doctor said it was a ligament, but it caused Schmuhl to miss six weeks of practice, “and I entered really not having many expectations.”
“I just knew my left hand was sore and it hurt to hit certain shots,” he said. “I was able to drive and putt OK but I didn’t hit a lot of good irons.”
He finally got an MRI and it was revealed Schmuhl had a broken hand that required surgery.
Last year was the third time he has played in this event, participating in the Frys Open a few years ago.
“I like the North Course,” said Schmuhl of the layout re-designed recently by  legendary pro Johnny Miller. “It’s straight-forward, nothing tricky, and they did a nice job with bunkering.”
Schmuhl, a three-time NCPGA Player of the Year, has played in the AT&T Pebble Beach Pro-Am, the Reno-Tahoe Open, the Barracuda Championships and the WEB.COM’s TPC Stonebrae Championship and Fresh Express Classic as well as earning entry into eight PGA Professional National Championships.
He qualified for this event by winning the NorCal Section title for the fifth time, besting the field over 54 holes at The Bayonet Course.
Once again, the Windsor pro doesn’t have particularly high hopes, but he knows the course, knows what he has done there, and there is no rule against dreaming.
“There’s no real pressure, but I don’t think it’s unrealistic to think I might make the cut,” he said, noting he has come close to making the cut in several PGA tournaments.


And looming not that far away is the possibility of playing on the PGA Champions Tour.
“It depends on how things go,” said Schmuhl, who indicated he would consider going to Champions Tour Qualifying school. “If I stay healthy, it’s something I would think about.”
But for now, while many of his competitors will be flying into the area in their own jets, Schmuhl will be commuting by car to Napa, planning on playing a few practice rounds before the tournament begins.
“My goal is to still be playing Saturday,” said Schmuhl.

Monica Borowicz competed in the women’s long drive competition in Oklahoma in early September.
“I had an incredible time,” said the former SRJC tennis standout who also played golf at Sonoma State.  She just missed the cut to make it into the top eight women finishers in a field of 21.
“So my 2017 World Long Drive adventure has officially came to an end and I’m frustrated and sad about the outcome, but I have to say I’m also astoundingly proud of myself and how far I’ve managed to come after  officially starting to participate only four months ago,” she said.
“I didn’t have enough in me to finish the job but I’m confident that 2018 is going to be my year,” adding that she really appreciates all the local support she received . . . “the future looks bright.”

NCGA course rater Richard Schoellhorn and his crew evaluated the course at Little River Inn and GC in Mendocino recently and he was impressed with one guy who is still swinging the clubs.
“During the rating, we met some longtime members,” explained Richard. “George Egling turns 100 this year and he’s still playing – twice a week and he regularly shoots his age.”
Richard said Egling was Superintendent of Schools in Colusa before moving to Mendocino, noting “he’s still quick-witted and spry and definitely an inspiration to all of us,” said Richard, adding “his playing partner is 90!”

Are golf tips really worth it?

Will Karnofsky, teaching pro at Peacock Gap GC in San Rafael, has published an article that flies in the face of established instruction.
I connected with Will last week and decided to print his article and let you judge for yourselves.
“Golf Tips” Contribute to Poor Performance
Mind/Body/Golf Coach Will Karnofsky, PGA

Tips, tips, tips! Keep your left arm straight, pause at the top, count to three, eye on the ball, keep your head down . . . Golf tips are everywhere. Magazines are flooded with them, golf pros espouse them and players can’t get enough of them. These tips are tried, used, dropped, retried, switched, modified, and yet, they don’t help – which is the reason golf professionals will never go out of business.

The reality is the ‘tip’ hurts your game. Recent research shows that traditional golf instruction i.e., the do it this way lessons, video comparison, teacher demonstrations and fixing swing faults do not create long term learning. Yet, the magazines and the Golf Channel continue to offer the ‘top tips’ from the teachers. Why?

Perhaps it’s all too easy to imagine that the tour pros have the best kept secrets and if we can just learn the right one, we will be magically anointed – transformed into a swinging machine. A machine that locks in this magical tip and forever blesses us with a flawless repeatable swinging grace. Yet, the reality is, the quality and consistency of our golf shot is not dependent on some technique, it is dependent on the quality of our awareness at each given moment.

To be able to sense all the aspects of the swing as it is happening, in the present moment, is what assures your best performance. Can you sense your physical body as you swing? Feel your hands, arms, shoulders, hips, and legs. Notice if you can sense the club face as it swings through the elliptical arc you make. When you mishit a shot, notice, what is the angle of approach? The spin of the ball? What is your relation to the target? The quality of your attention either supports or interferes with the physical action of your swing.

In contrast, swing tips tend to keep you in your head, disconnected from the direct experience of what is happening as you swing. You may be speeding ahead mentally, thinking about how to implement some technique, or fixated on an instruction from the past. When you are truly learning, you are awake and present to the sights, sounds and sensations of what is happening right here, right now. This awareness is the real secret to learning golf – and to learning in general. It is also much more enjoyable!

The key is to establish a ‘baseline of awareness’. There is nothing to do, just be – feel, sense, listen and see. Do not try to do impose anything onto your swing, practice simply noticing what is already there. This awareness is the beginning of self-coaching. Rather than being in a fixed technique we are fluid and engaged – adjusting as we sense what is needed in the moment, wide awake as we try, fail, adapt, change and begin again. Don’t take my word for it. Try it for yourself!

I appreciate those of you who have communicated with me and I want to hear more from you.
If you have information about upcoming events, sales, instructional sessions or anything golf-related, please let me know and I will get the word out for you to area golfers.
I also want to hear if you have complaints or compliments for local courses and golf businesses. Where do you like to play, and why? Are there courses you feel don’t deserve your business? Who do you trust to give you lessons? Where to you take your clubs when you need them repaired or regripped. What golf stores offer the best deals and back up what they sell?
I love writing feature items about local golfers and local groups. If you have any suggestions, send me the details and contact information and I will take it from there.

And if you are interested in sponsoring GOLF 707, like Bill Carson at Wine Country Golf does, let me know and I will send you details.
Email me at bmeadows4sports@aol.com