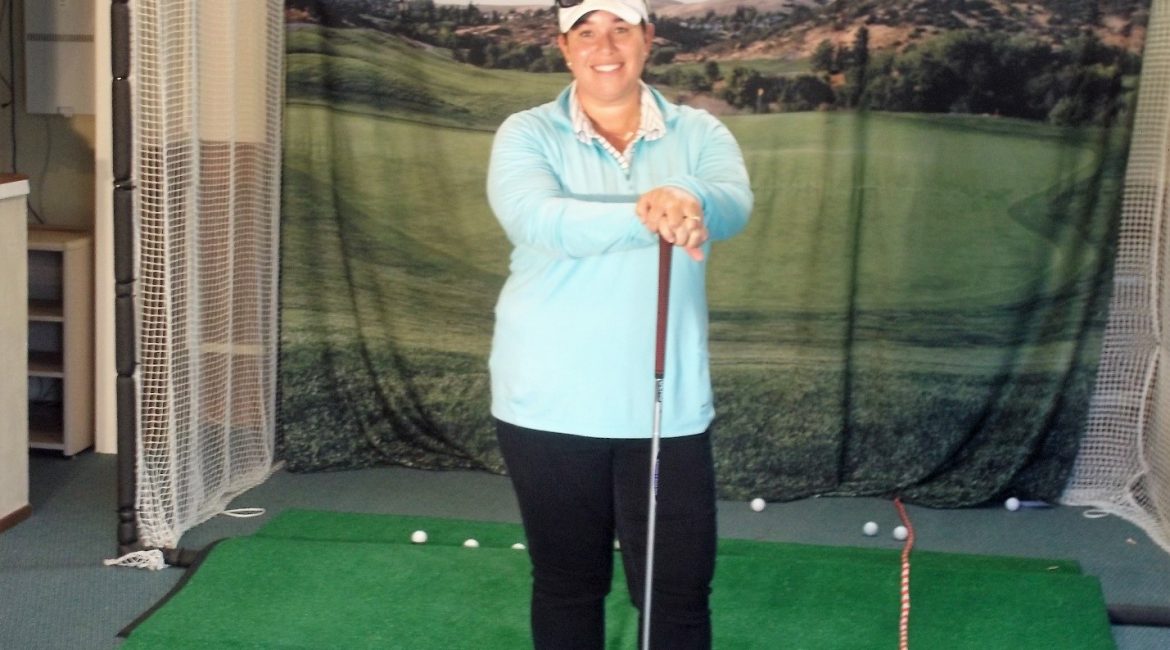 Golf Teaching Lab at Oakmont
Jessica Reese-Quayle, one of the best female golfers to ever come out of Sonoma County, has taught golf at Oakmont GC for three years, but lamented those days when it was too rainy or cold to give instruction.
That’s changed since Reese-Quayle, with the help of her dad Ken Reese, created The Golf Teaching Lab in the former Oakmont offices near the first tee of the East Course.
Most Oakmont golfers as well as her many students have seen or actually taken advantage of the GTL since it opened in January, but she and her new associate, fellow PGA Class A pro Rebecka Heinmert, will stage an open house this Saturday (April 16) from 9:30 a.m. until 1 p.m. with free 10-minute sessions on two new state-of-the art pieces of equipment, Boditrack and Trackman.

The Boditrack measures balance and sway, which can detect faults like swinging over the top, explains Jessica. The Trackman measures distance, angle of attack, ball speed, whether you are hitting it left to right and other aspects of the golf swing.
The GTL includes a club-fitting area and a “body and movement room”  as well as a hitting area where golfers can pound balls into a screen with a scene from The Bridges Golf Course in San Ramon.
“I had my own little teaching lab that my dad built for me in the garage,” said Reese-Quayle, a prep star at Montgomery (1999) then University of Texas with a short run on the LPGA Tour before injuries put a halt to her pro career. She also had a similar “lab” when she lived in Texas.
“I love teaching but when it was wet or cold, that was a problem,” Jessica said. “I’ve always wanted an indoor facility like that and I still hope to get a covered hitting area built on the West Course driving range.”
Jessica, married to CJ Quayle, a former Rancho Cotate athlete, says “my students’ success is my success . . . I try to keep it simple, I have students from age 7 to age 90 and the results have been good.”
So good that she often teaches seven days a week, a situation her husband would like to see change a bit. After all, there is their six-year-old son named Austin, which by no coincidence is home to University of Texas.
Age is no factor when it comes to teaching golf, according to Jessica. She recently worked with a 70-year-old man who had two hip replacements and back and shoulder surgery.
“He was barely driving it 130 yards, but we changed some things, including his angle of attack, and how he’s hitting it 180 yards,” she said, adding that while some golfers are reluctant to change, “overall, everybody likes the new equipment as well as the teaching lab.”
For information on Jessica’s instruction rates and class information, go to www.golfwithjessica.com or email jreesetx@aol.com

More honors for Windsor’s Schmuhl
Windsor Golf Club’s Jason Schmuhl, who has earned plenty of praise for his play as a professional, was honored recently for his stellar career at Santa Rosa Junior College.
Schmuhl was inducted into the SRJC Hall of Fame, a group rich in athletic tradition and history but one that until April 2, included just one Bear Cub golfer, Bob Borowicz, former Montgomery and JC star now the director of golf at Bennett Valley GC.
“It was a special night for me,” Schmuhl said. “The JC committee put together a video tape they played when they announced the award . . . it had my college coach and my old teammates talking about me.”
Jason went on to say, “To listen to my junior college coach Len Read and my old teammates brought back many great memories. It was also great having many of the people I work with, my family and many people I know from the golf community there.

Schmuhl enrolled at SRJC in 1991 and placed fifth in scoring average in the Bay Valley Conference. In both years of competition for the Bear Cubs, he helped the team qualify for the State Championship Tournament. In his sophomore year, he was a key figure in leading the Bear Cubs to the Camino Norte Conference championship.
“Santa Rosa Junior College has always had a special place in my heart,” Jason recalled. “It’s a tremendous honor to be nominated and elected into the SRJC Hall of Fame.”
Jason, who attended USF after leaving SRJC, is a three-time NorCal PGA Player of the Year. He still holds the course record at Windsor, a 62 that matches the score shot by pro David Duval.
A deserving honor for a very good golfer, a very good guy.


Wine Country Games include golf
Oakmont’s outstanding – and one of my personal favorites – Executive Course will be the site of the golf competition for the 2016 Sonoma Wine Country Games.
The par-63 layout features large greens, 45 strategically placed bunkers, heritage oak trees, water hazards and memorable views of Annadel State Park. In my opinion, it also has a couple of the best par-3 holes in the area.
If you’re a member of the club, you only pay the Wine Country Games registration of $45, plus a $10 sport fee. Non-members pay $45 registration plus a $40 sport fee.
For information, contact Cheri Lieurance, marketing coordinator, at Sonoma Council on Aging, 525-0143, Ext. 113, or go to winecountrygames.com
Golf is by far not the only sport offered. There are 18 sports in all, including bowling, tennis, track and field, volleyball and others.
“The Sonoma Wine Country Games encourages healthy activity and social engagement for anyone 50+ through education, connections and the spirited competition of sport, inspiring all to take an active role in determining the quality of their aging experience,” according to the Sonoma Council on Aging. It can also be a lot of fun.

SSU hosts CCAA Championships
Sonoma State is hosting the 2016 California Collegiate Athletic Association men’s golf championships at Silverado CC in Napa in April and volunteers are being sought.
The event begins with 36 holes of stroke play on Monday, April 18 on the North Course with stroke play determining the individual conference champ. The four highest-finishing teams will advance to medal match play on Tuesday, April 19.
The team championship will be determined by medal match play Wednesday, April 20. The CCAA team champ is the automatic conference qualifier for the NCAA Championship.
Volunteers are needed as scorers, scoreboard workers, spotters as well as a refreshment coordinator. If you’d like to help out, contact Cathy Fusco at 695-6311 or go to California2710@gmail.com
“We are extremely pleased to host our CCAA Championship at such a prestigious facility,” said SSU coach Val Verhunce. “Having the event at Silverado will create a memorable experience for our student-athletes who will be able to compete on the same course as some of the game’s greats.”

Santa Rosan Daryl Rossi will be competing in the National Amputee Long Drive in Tennessee on July 10-11.
Rossi, 54, was born without a right arm, but it hasn’t kept him from playing a sport he loves and playing it well.
On July 11-12, Daryl will travel to Loudon, Tenn., to compete in the ParaLongDrive Cup at Tennessee National Golf Club.
Rossi, a fiber-optic specialist, planned to enter last year’s event in Mesquite, Nev., paid his entry fee and was set to go when he found out the competition had been moved to Florida.
“I was disappointed . . . no contact, nothing,” said Rossi. “I told them to keep my entry fee and I would try to make it this year. I have a good  friend who lives close to the course so I will stay with him.”
There are numerous categories, or as Daryl puts it, “something for whatever’s ailing you . . . arm, leg . . . you name it.”
He has a new Cobra driver, and while this is the first time he has competed in this kind of event, he has taken part in other amputee tournaments and is eager to give it a try, explaining “I’m on an exercise program, trying to get my legs and arm strong and shed a few pounds.”

Petaluma G&CC offers scholarship
Petaluma Golf and Country Club has introduced a 12-month scholarship into its Junior Golf Development Program. Deadline to apply for the scholarship is May 15, and deserving juniors will win a 12-month scholarship starting June 1.
The development program was created and is taught by PGA head pro Christopher Gay, and includes year-long weekly instruction and utilizes the level based training system of USKids Golf.
It’s a beginner program that introduces the game to juniors aged 7-17. If you’re interested in finding out more, go to petalumagolfandcountryclub.com and print out the scholarship application. For additional information, you can reach Gay at 762-1057.
“Shooting low scores is not a criteria,” Gay said. “We are looking for juniors who not only want to learn this game, but understand the values and honor associated with golf.”
Petaluma Golf and Country Club will hold a Spring Invitational League Night May 19 at 5:15 p.m. The event is open to members as well as golfers in the Petaluma area.
The format is 9-hole, variable better-ball of four players and is limited to the first 56 golfers signing up with a May 17 deadline. Cost is $20 per person with a rib-eye steak dinner to follow the golf. The fee includes green fee, cart, dinner and the prize fund.
To sign up, call 762-1057 or contact Christopher Gay at cgay@courseco.com

Let’s hear from you . . .
If you are a golfer, pro or amateur and have an item you want to share with the golfing community, let me know, It can be to publicize an upcoming tournament, or anything related to golf.
If you have a good golf story – about you or anybody – send it to me and we can share it with our readers. The idea of GOLF 707 is to get the word out, about golf and about those of you who love and play the game.
And if you have an interest in supporting GOLF 707 as a sponsor/advertiser such as Wine Country Golf Group, let me know and I will get the necessary information to you. It’s OK to be strange . . . but don’t be a stranger.
Contact me at bmeadows4sports@aol.com