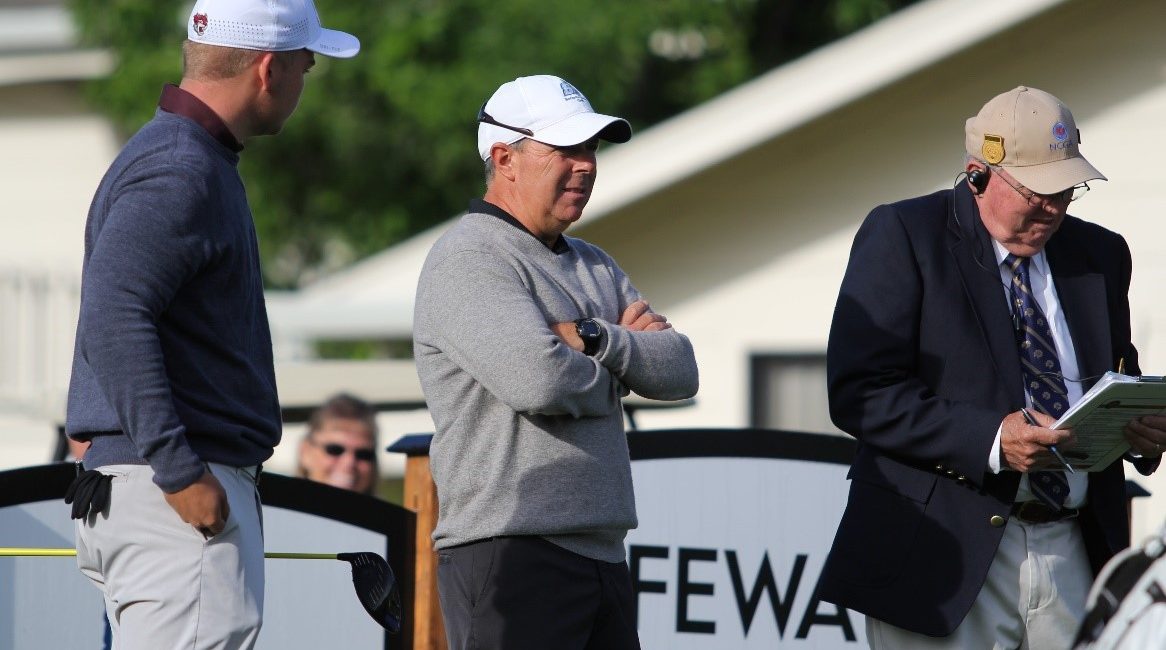 
When Jarin Todd graduated from Woodinville High in Washington, he wasn’t sure where he would attend college.
Because he hadn’t competed in many major junior tournaments, he was not on a lot of recruiters’ radar “so I wasn’t highly recruited.”
Sonoma State golf coach Val Verhunce may not have been overwhelmed with Todd’s size, but he was impressed with his attitude, ability and potential when he was contacted by Todd.
“We got his resume’ and video tape and it was shocking to find out a kid 5-6,135 pounds who could hit the ball 300 yards,” recalls Verhunce. “He was overlooked by a lot of schools but he came to visit us and we were very happy he made the decision to come here.”
Todd went on to anchor four very successful SSU teams, including an NCAA Division II championship effort in 2009.
“Our degree of success still shocks me when I think about it,” says Verhunce, who started the SSU men’s program in 2003, followed by creation of the women’s program in 2007. “There are a lot of programs who had been around a lot longer than us and never achieved that success.”
“Winning nationals my senior year was obviously one of my fondest memories at Sonoma, but while I had a good individual career and won a lot of tournaments, the best part of playing there was how close we all were as a team,” recalls Todd, a three-time All-America choice. “Every year I played, all the guys on the team were really great friends on and off the course. I think that really helped us become a great team . . . we all cared for each other and wanted to do well together, and we did.”
But it’s August, 2017, and the Seawolves are ready to take to the links once again with high hopes.
“We have some good people back on both the men’s and women’s teams,” says Verhunce, a PGA pro who started his career at Santa Rosa G&CC and later taught at Rooster Run and Adobe Creek.
Spencer Clapp (Federal Way, Wash.), an all-conference selection as a sophomore, had the second-best stroke average (74.00) behind graduated Justin Shluker, a first-team All-CCAA choice (73.16 scoring average) and a two-time Academic All-America from Park City, Utah.

There are also some incoming players from Washington, which has sent SSU some outstanding student-athletes, including Jarin’s brother Janssen, and All-America choice Jeremy Wendelken.
“I wanted to play somewhere I could play and practice year-round,” recalls Jarin. “My brother really liked the school when he visited so he ended up coming here, too, same with Jeremy (Wendelken).
“Western Washington is a pretty popular school and I think that has probably contributed to the situation . . . kids look at going to Western Washington and see the tournament results and who (SSU) is in the same division and Sonoma becomes a potential spot for them to land.”
How good was Jarin? His senior scoring average was 70.39, he was a combined 42 under par that season and shot a school-record 62 at the St. Martin’s Invitational. He also shot 63 at Santa Rosa G&CC.
Devin Gregg (Novato) and Ian Hoffman (Redding) are also back for the men, while Sammy Oliva (San Jose) and Sabby Virtusio (East Bay) head the list of returning women players.
“The men and women have both been competitive,” says Verhunce, noting that they have only missed postseason play twice.
While five players make up the travel team, the men’s roster should number between 10-12, the women’s 8-10. The first men’s event – CCAA teams and other colleges — is Sept. 18-19 at Santa Rosa’s Fountaingrove GC while the women open at Corral de Tierra CC in Salinas Sept. 25-26. The women host a tournament at Oakmont West Oct. 16-17.
Verhunce believes “success breeds success,” and points to the men’s first-ever tournament win at UC San Diego in 2006 as a starting point, noting “it felt like we had won the national title.”
“The SSU men’s golf program was established because of the passage of a student fee referendum in 2003 that funded the Department of Intercollegiate Athletics to add two new teams and expand our Sports Medicine staff,,” explains longtime athletic director Bill Fusco, who is retiring this year after more than 20 years on campus. “The other team we added was women’s water polo. Val Verhunce was hired as a part-time head coach. Men’s golf competed initially in the 2003-04 as part of the California Collegiate Athletic Association (CCAA).
“The SSU women’s golf program was approved in 2007 and Val was given additional duties to coach both men’s and women’s golf on a full-time basis. For the first time in 2017-18, SSU women’s golf will have conference affiliation joining the CCAA with five other CCAA institutions that sponsor women’s golf.
“I always thought having both an intercollegiate men’s and women’s golf team was a great fit for our program and campus. There are so many beautiful, challenging golf courses in this region, it’s a natural connection. Both of our teams have done exceptionally well and have great support.”
Todd is still playing, having achieved some success in Asia and on the Web.com Tour.
“I’ll be going back to Asia next month . . . I just didn’t play well enough or get in enough events to spark some momentum on the Web.com Tour,” says Todd. “I hope to play well and move up to the European Tour.”

The SSU Alumni/Scholarship Tournament is scheduled Sept. 11 at Santa Rosa G&CC. The $300 entry cost includes greens fees, range balls, cart, contests, awards and prizes, lunch, after-round appetizers and special edition SSU golf gear.
The event (two best balls of a fivesome) is geared towards fulfilling a commitment of $40,000 to subsidize SSU Student-Athletes’ education.
“In addition, donations and sponsorships go to supporting our future leaders on and off the golf course,” notes a tournament brochure. “Please help build the foundation of character for these young men and women. Your participation and contribution gives opportunities to student-athletes.”
Cost of the after-golf dinner only is $25, with tee sponsorships available from $1,500 to $10,000. Mulligans are $25 each.
For information, contact Verhunce at 707-799-0712 or val.verhunce@sonoma.edu
Note: If you know of any local youngsters playing at the college level or headed for college this fall, give me some details.
Junior golf at Oakmont
LPGA pros Jessica Reese Quayle and Rebecka Heimert will be offering a development golf program at Oakmont GC featuring skill building, rules and etiquette and on-course games.
The schedule calls for practices Sept. 6, 13, 20 and 27 as well as Oct. 4, 11, 18 and 25. Cost is $279 with a sibling discount of $40.
“Every other week we will be at the East Course and play at least four holes back to the West Course,” according to Jessica, adding that players will be picked up at the West Course.
Also included in the program is a 30-minute private lesson with the added bonus of a range card worth $70.
For more details, go to info@oakmontjuniorgolfacademy.com
Gone, but not forgotten . . .
I was walking through the parking lot at Fairgrounds GC the other day and came across a golf scorecard. Nothing special about that, although in some ways it was.
It was a scorecard from Wikiup, one of the increasing number of courses – in our county and beyond – closed for a variety of reasons.
I remember Wikiup when tennis pro Ray Helmy owned it, a fun little course that didn’t take you long to play and was reasonably priced. Lee Farris, who owns Sebastopol GC, bought the place from Helmy and ran it for a few years, keeping it well maintained and a good place to play.
Wikiup was last owned by Tom Langbein, who sold it not long ago to a developer, never again to be a golf course. It was a good 9-hole layout, nothing special, didn’t cost a lot and it didn’t take long to play.
Another casualty is Los Arroyos, a 9-hole layout near Sonoma that bit the dust a few years ago. Again, nothing special, but like Wikiup, an inexpensive place for kids and seniors and beginners to learn the game.

Adobe Creek, an 18-hole Robert Trent Jones design in Petaluma closed last year and there is no word on what will happen to it. Will it re-open under new ownership? Will it be a 9-hole course? People whose homes border the course would like some answers.
Also gone is the cute little 9-hole course on West Sierra Avenue in Cotati, which had a pitch and putt within the larger course.
The golf business is struggling and these courses are among the “victims” of the decline in play and popularity. There are obviously worse situations in this world, but I am always sad to see courses close.
If you have any thoughts on this, or any golf-related issue, email me at bmeadows4sports@aol.com We are hoping to keep writing GOLF 707, but need your contributions and your support to make that happen.
Share
Copyright (c) 2016 Splash.
Theme by StylemixThemes.