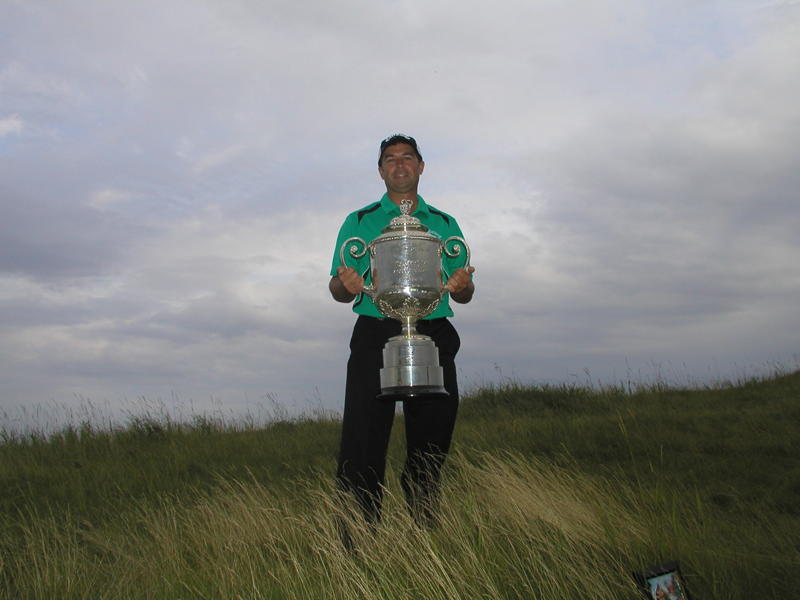 Windsor Golf Club head pro Jason Schmuhl has once again been named Player of the Year by the Northern California PGA, the third time the Analy High grad has claimed the honor.
Schmuhl earned the award “for his exceptional tournament performance this year,” according to the NorCal PGA.
Windsor’s Jason Schmuhl has been named NorCal Player of the Year for the third time
“I haven’t won for five years although I’ve been close,” said the 43-year-old Schmuhl. “I was slightly ahead in points going into the final tournament (NorCal Open)  and finished well enough to win Player of the Year.” While he didn’t win the NorCal Open, he did top the rest of the club pros in the field.
Highlighted by a win at the NCPGA Match Play Championship, Schmuhl’s strong performance across six events led to being the top point leader in the Section with 878 points.
In addition to 20 years of teaching experience, he has played competitive golf since the age of eight. His golf resume is impressive, notes the NorCal PGA, with berths in numerous PGA TOUR events, including the 2010 PGA Championship at Whistling Straits, the Fry’s.com Open, the AT&T Pebble Beach National Pro-Am, the Reno-Tahoe Open, and the Barracuda Championship.
Schmuhl, married (Tracy) with three children, has been at Windsor for 17 years after two years at Santa Rosa G&CC.
“It was nice to win (POY) again,” he said of his success “But I want to put in more effort this year to see if I can do it again.”

Schmuhl has earned entry into eight consecutive PGA Pro National Championships, and is now a  three-time Player of the Year award recipient, having won previously in 2010 and 2008.
This year the Player of the Year gets an automatic spot in the AT&T Pebble Beach Pro-Am Feb. 11-14, the third time Schmuhl will have played in the event. In the past, the POY also qualified for the Reno-Tahoe Open and the Frys.Com event but now it’s just the AT&T.
Schmuhl, whose daughter Kristina was Empire Player of the Year while playing prep golf at Maria Carrillo and whose 20-year-old sister Khiana is an outstanding player attending Santa Rosa JC, doesn’t think golf is going in what he called “the right direction,” mainly because not that many kids are playing the game.“Kids have a lot of other things to do these days,” he said. “But parents are usually the ones who have to get them started in golf.”
Other 2016 awards include PGA teaching pro Shawn McEntee of Chardonnay GC in Napa as Senior Player of the Year (50-64 years) for the third consecutive year and PGA Life Member Glen Stubblefield of Valley Springs, the Super Senior (65+ years) Player of the Year winner.
The NCPGA recognized all 19 of its 2015 Annual Section Award winners Dec. 6 at the NCPGA Special Awards Ceremony & President’s Dinner at Round Hill Country Club in Alamo.


Good field for AT&T this year
Three of the top five money leaders on last year’s PGA Tour, plus the defending champion, will comprise one of the best pro fields in recent history AT&T Pebble Beach Pro-Am, Feb. 8-14.

Jordan Spieth, defending PGA Tour Player of the Year and FedEx Cup champion, will be joined by Jason Day, Dustin Johnson and Brandt Snedeker. Snedeker won the 2015 AT&T Pebble Beach Pro-Am for the second time in three years, finishing ahead of Day and Johnson (T4), and Spieth (T7).
Spieth grabbed the attention of the golf world when he captured both The Masters and U.S. Open, before finishing fourth along with Day in British Open. Day earned his first major by winning the PGA in August. Johnson was in strong contention at all four majors, including The Masters (T6), U.S. Open (T2), and PGA Championship (T7). Snedeker’s solid season was highlighted by his win at Pebble Beach, and an eighth-place finish at the U.S. Open.
A year ago at the AT&T, Snedeker finished with a tournament record 22-under, topping the previous mark of 20-under (Mark O’Meara 1997, Phil Mickelson 2007).
In the current Official World Golf Rankings, Spieth and Day are ranked No. 1 and 2, respectively, while Johnson is No. 8. Other name players expected to play include Jason Gore, Jason Dufner, Padraig Harrington, Hunter Mahan, Phil Mickelson, Steve Stricker, Nick Watney and Bubba Watson. Celebrities signed up include Wayne Gretzky, Steve Young, Mark Wahlberg, Chris Berman and Larry the Cable Guy.
Tickets for the 2016 AT&T – to be played at Pebble Beach, Spyglass Hill and Monterey Peninsula CC’s Shore Course – are now available: Practice ticket (valid three days, Monday through Wednesday) $60; single-day ticket (valid one day, Thursday through Sunday) $60; weekly badge (valid Monday through Sunday) $150.
Children 12 and under are free with a ticketed adult, and active reserve and retired military, veterans and National Guard, may register for up to four complimentary single-day tickets.
Other ticket packages are available. For more information and to view the tournament week schedule, visit www.attpbgolf.com Tickets may also be purchased through the tournament box office, 800-541-9091 (toll free) weekdays during business hours.

Lake County report
Lake County had some good times and some very bad ones with the Valley Fire this past year. With thanks to Lake County’ golfer/golf writer extraordinaire John Berry, here are some highlights:
“October and once again had a full schedule of nine open events, one senior tourney, and two junior competitions.  Brad Pendleton of Lakeport, arguably the best amateur golfer in Lake County, was the circuit’s On The Links golfer of the year for 2015 with victories in the Lake County Match Play, the Lake County Open, and a season-ending triumph in the TOC where he shot an impressive 7-under-par 65 at Buckingham.
“Craig Kinser of Lakeport was the circuit’s senior golfer of the year, Rick Easter of Lower Lake was recognized as the net golfer of the year, and Dr. Bob Jolinof Lakeport continued to dominate his division by securing the senior net golfer of the year top prize.
“It was also a tough year for the circuit as many events had lower than usual fields and the grand-daddy of the local tour, the Lake County Amateur at Adams Springs, had to be cancelled because of the devastating fire. The LCAGC opens its new season on Feb. 20 at Buckingham with the playing of the One Man Scramble.
“Finally, the Valley Fire, as well as the Rocky and Jerusalem fires of the summer, impacted the golf scene in Lake County from the local and the tourist angle. The Adams Springs pro shop was totally destroyed by fire, Langtry had major damage to its golf course watering system, homes were destroyed at Adams Springs and Hidden Valley Lake, tournaments were cancelled, and local golfers were displaced, but plans are in place for the new year.


Making golfers more comfortable
Windsor Golf Club has something special to offer junior and beginning players or any golfer who wants to play under more reasonable yardage circumstances.
Windsor is promoting its junior/beginner yellow tees, which were actually put in place at the end of last summer. The tees are roughly half the distance of the standard tees.
For instance, the par-4 No. 1 hole, which plays 361 yards from the blues, is 190 from the yellow tees; No. 4, a par-5 usually 472 yards, is 230  from the yellows, and No. 13, a par-3 normally 161 yards, is 70 from the new tees.
“We want to get the word out for those golfers looking to play one of the nicer courses in our area without the pressure of an inappropriate distance,” says Windsor pro Demian Reddy.
Check these yellow tees out and let us know what you think.


‘Ultimate Round’ at Pebble Beach
“The Ultimate Round – Pebble Beach Golf Links, an Illustrated Guide to America’s Majestic Dream Course,” is a compendium of Pebble Beach Golf Links never before published, features hole-by-hole imagery and state-of-the-art graphics with historical anecdotes for each hole and essays by golf notables.
This new book by photographer Joann Dost is now available at www.joanndost.com and through Pebble Beach Resorts.
“Pebble Beach and Joann Dost—a pair of American treasures,” says Jim Nantz, CBS Sportscaster and Pebble Beach resident. “This book brings you as close to actually playing this classic seaside links course as only Joann can.”
Published by Joann Dost Golf Editions, LLC, this 146-page 10.5” x 10” full-color hardbound volume is the first edition of the book, with a retail price of $40.  “The Ultimate Round” includes quotes by 14 pros, including five members of the World Golf Hall of Fame – Amy Alcott, Ben Crenshaw, Juli Inkster, Johnny Miller, andTom Watson.


Happy New (and wet) Year
The year is starting out a little damp but we all know that we need rain and snow, so while golf may temporarily take a back seat to the weather, consider the bigger picture.
We were, admittedly, a little inconsistent with posting GOLF 707 in 2015, for a variety of reasons. But my New Year’s resolution is to do better in 2016 and I am once again asking for your support.
I want GOLF 707 to echo the thoughts of golfers – pros and amateurs – and I want to hear what you have to say about the state of the game, where we might make improvements, local and beyond.
I want to hear what courses you like most – and why – and also courses you have a problem with for whatever reason. Do you have any particular gripes about the game? Let me hear them and I will get the proper people to address them.
I’d like to know which pros you like – and why. And what do you look for in a golf instructor?
I want to know what tournaments are coming up at your golf course, and what other golf-related events are on your schedule.
I want to know the names of good young local players, either at the youth or prep level or those who are part of college programs.
I want to hear those special little golf stories I used to hear, and write about when I wrote a golf column for the Press Democrat. I want GOLF 707 to be a forum . . . for you.
We appreciate the support of Bill Carson of Wine Country Golf Group (Windsor, Adobe Creek, Rooster Run) and would be happy to speak with anyone interested in helping sponsor GOLF 707 in 2016. Contact me at bmeadows4sports@aol.com and let me take it from there. Again, Happy New Year and hope to hear from you soon.
Share