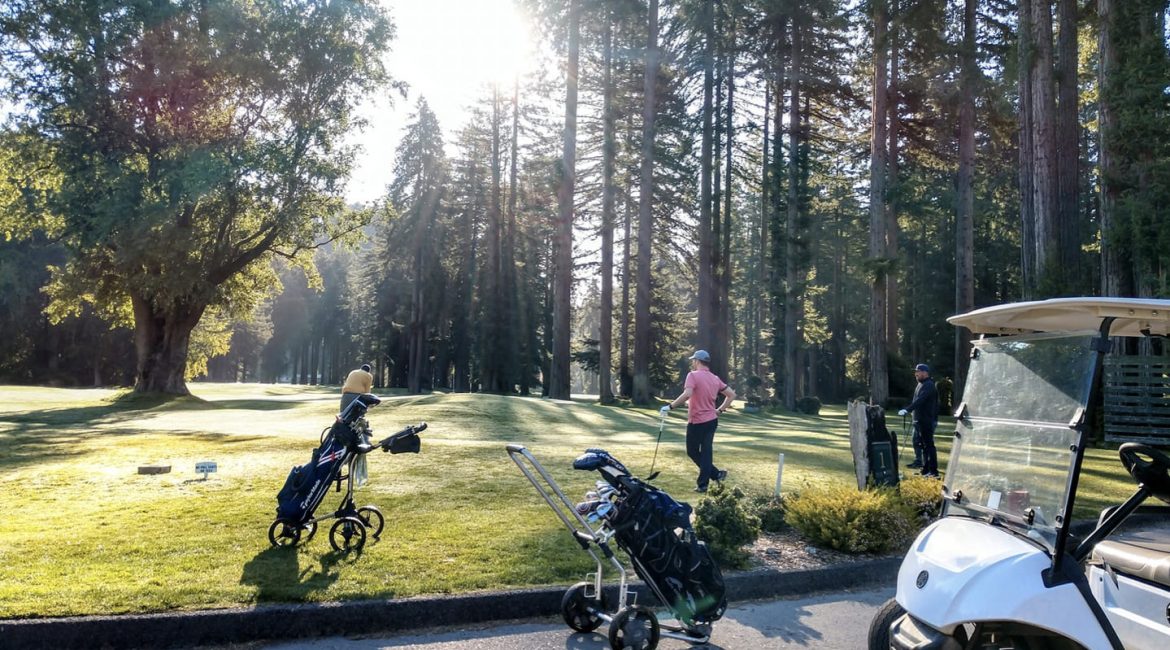 The Peter Hay short course at Pebble Beach Golf Links has taken on a new look, and here is how Golf Digest describes it:

“Pebble Beach has announced the opening date of its new short course, reimagined by Tiger Woods and his design team. The Hay, replacing the old Peter Hay course,  is set to open April 16, according to the resort.

“In addition to a new short course, there will be a putting course and new restaurant with an outdoor patio to the facility—perched atop the land and offering incredible views of Carmel Bay.

“The Peter Hay short course was one of the original short courses in the U.S. when Pebble Beach’s long-time pro Peter Hay designed it in the 1950s for beginners and juniors. It has been a mainstay at the resort ever since, providing an entry point for many in the area to get into golf.

“Conversations about the vision of Peter Hay were actually sparked by Tiger Woods during his preparations for the U.S. Open in 2019, Pebble Beach vice president and Director of Golf John Sawin told Golf Digest last year. Tiger noticed  construction was ongoing at Peter Hay, which served as the grand entrance to the U.S. Open, and he expressed  interest in being involved in the future of a reimagined short course at Pebble Beach.

“From our standpoint, it was a natural fit,” Sawin told Golf Digest. “Tiger and his team are very fun, creative people. And they have experience building these fun, dynamic playable short courses that are interesting and challenging for avid golfers, but still fun and playable for beginners. And maintaining that family-oriented, welcoming environment for junior golfers and beginners will be a great fit for how we see Peter Hay continuing to play a role in our community within the golf resort.”

“The Hay’s second hole will likely be the highlight—the Pebble Beach and TGR team mapped out the iconic par-3 seventh hole at Pebble Beach and created an exact replica of it at the short course. The replica is even positioned in the same direction, meaning that anyone playing The Hay will play the hole in the same wind direction as its older brother.

“Each hole at The Hay has a yardage that coincides with a bit of Pebble Beach history. The fourth hole, named “Bing,” is 47 yards, in honor of the original year Bing Crosby brought the clambake to Pebble Beach. The ninth hole, named “Tiger,” is 100 yards, for Tiger’s runaway victory at the 2000 U.S. Open, which was the 100th U.S. Open.

“The price of admission for The Hay: $65 for general public and resort guests; free for 12 or younger; and $5 for Youth on Course members. Replay rates will be discounted 50 percent, according to Pebble Beach.”

I recall during the many trips I took to the Monterey Peninsula to cover the AT&T, most spectators would just walk past the Peter Hay course.

Got a chance to play it a few times, and it was fun, but the new Hay layout should really be a treat.

Northwood Golf Course has long been a favorite place for me.

Its history, its layout . . . that and more make it a fun albeit challenging course to play a round of golf.

The photo above provides just a small look at what lies in store for golfers, especially those discovering the course for the first time. If you’ve never had the chance to check out Northwood, I would suggest you do.

Here is some historical information from an article by Lewis Don Bale in March of 2000:

“In 1928 after designing around the cypress trees at Cypress Point and amongst the magnolias of Augusta National, Dr. Alister MacKenzie made a stop along the Russian River and it’s majestic Redwood trees.

“While you may never have the privilege of playing Augusta or Cypress, you can experience Dr. MacKenzie’s famed naturally contoured fairways and undulating greens in a magnificent sylvan setting. A genuine challenge, casual elegance, pristine beauty, affordable green fees, and a signature ninth hole, all make for a most memorable golf experience at Northwood Golf Club.

“Northwood Golf Course was the product of the imagination of three men. The first to conceive the idea a golf course could be built on seventy wooded acres of land, across the Russian River from the world famous Bohemian Club Grove, was a Bohemian Club member, Jack Neville.

“Neville was eminently qualified as a golfer and architect. He was California Amateur golf champion in 1912-13-19-22-29 and a member of the Walker Cup team in 1923. He and Douglas Grant had designed The Pebble Beach Golf Links on the Monterey Peninsula in 1919.

“Neville then interested Dr. MacKenzie in the challenge to design a nine-hole golf course on this seventy acres.

“MacKenzie had come from his native Scotland in 1918, after designing courses in the British Isles, to consult with H. S. Holt and C. H. Alison on the revision of the Chevy Chase Golf    Course near Washington D. C. He then went on to design several courses in New York, Michigan and Ohio.

“MacKenzie and Hunter collaborated in the design of many California courses including Meadow Club in Marin County in 1927, the remodeling of Pebble Beach Golf Links in 1927-28, The Valley Club of Montecito in Santa Barbara and Northwood Golf Club in 1928 and Green Hills Golf Club in Millbrae in 1930. Their most famous, which firmly established their reputation, was the design of the Cypress Point Club at Pebble Beach in 1928.

“In 1933, MacKenzie was asked by Bobby Jones to assist in the design of the Augusta National Golf Course in Georgia. From there he went on to design courses in Australia, South America and New Zealand.

“MacKenzie and Hunter employed the American Golf Construction Company, William Selkirk in charge, to do the construction on the Meadow Club, Cypress Point and Northwood Golf Club.

“Following construction in 1928, Northwood had a succession of owners. After Milleresch there were Les Korbel, Ormsby, Stibbe and Northwood Development Corporation, J. Benton Bostick Jr. president and John Bancroft treasurer and resident manager in 1959. It was this corporation who subdivided the property and began selling lots in 1960.

“Had the plans of Bostick and Bancroft reached fruition, even the perimeter of the playing area of the golf course would have been sold as building lots. It is probable they were not aware of the illustrious past of Northwood and their plans would have led to the loss of what we now enjoy.

“Conditions placed on Northwood Development Corporation by the mortgage lender made it impossible to financially survive. The lender demanded, that as lots were sold, the proceeds be kept by them and applied to the loan. Being cash poor as a result, the property was traded to Ray Beach for some South San Francisco apartment property in 1966.

“Beach suffered the same fate as Northwood Development Corporation and escaped by selling to a naive buyer, Jack Yates. Jack had neither the capital or the know-how to survive and, in 1970, the lending company foreclosed on him.

“On foreclosure, a group of property owners and interested parties bought the property and incorporated on June 19, 1970. After a rocky start this group, headed by Dr. Charles Schaap, began to solve the problems of a run-down golf course blanketed by hundreds of gopher mounds and a profuse crop of daisies. It is now financially solvent and a beautifully maintained, challenging nine-hole golf course.”

The NCGA program Youth on Course has been popular with most golf courses around the country, and at Fairgrounds GC we strongly support it.

The program for young golfers provides an annual card that saves kids and their parents a lot of money on green fees.

It not only encourages young golfers to play more, but also results in more parents coming out to play with their children, which is a good thing.

However, recently, we have heard that a number of courses are cutting back or eliminating their association and support of YOC, so we reached out to the NCGA to see what’s going on.

Here is what I heard back from the NCGA’s Hugh Smith:

“Last year with the spike in activity, many courses found it difficult to balance regular play with YOC member access.

“There were a few which wanted to take a hiatus from YOC but instead we adjusted YOC times to be more accommodating.

“There were also a few courses which were concerned around the increased restrictions around COVID regulations.

“What members probably experienced was more of an adjustment to the availability which may have been an inconvenience.

Smith adds that YOC’s annual membership is now $25, still a great bargain.  For instance, at Fairgrounds we now charge YOC members just $2 for 9 holes, $5 for 18.

Courses have the option of charging what they want, although there is a cap on that fee.  Some courses offer additional benefits, such as discounted range balls, but best to check with individual courses.

If you want to find out more about Youth on Course, go to the NCGA web site and check it out. It will be worth your time and effort.