GOLF707- “Can I borrow your lefthanded club?” 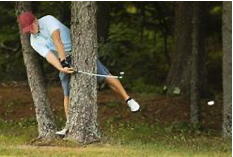 This happened quite a few years ago but it always stuck with me.

I was playing golf with a good friend, a lefty.

We both hit our drives on a par-4 hole, mine ending up against a tree on the left side of the fairway.

The ball was really close to the big tree, and I tried to figure out the best way to move it a little bit down the fairway.

I grabbed my right-handed 7-iron and turned it over, but I realized I wasn’t going to get much of a result.

At that point, my friend, Jerry, suggested I used one of his left-handed clubs.    The more I thought about it, the better his suggestion sounded.

Neither of us knew if me, a right-hander, using a left-handed club was legal, but the rules were not a big part of my game at that stage of my life.

So I took Jerry’s 7-iron, sized up the shot and swung, sending the ball about 100 yards down the fairway.

It got me to thinking: If a left-handed club could help extricate me from bad lies, why not just stick one in my bag???

Jerry confirmed my thinking, telling me he always carried a right-handed club in his bag for similar predicaments.

A few years later, I was playing with a friend, who is a golf pro, and asked him if me using a left-handed club was legal.

He said yes, expressing some surprise.

Since then, I have always carried a lefty 7-iron and have to admit it has saved me a lot of shots over the years.

The other day, I came across something online that brought up those old memories, an article by “The Rules Guy,” that addressed the lefty-righty club issue.

“ This would work for me rather than flipping over a club to get out of tough situations. – Paul Dziengelewski, Westfield, Mass.

“Knock yourself out, Paul.

“There is no rule regarding the makeup of a set, only that you have 14 clubs or fewer. Seven lefty, seven righty? Sure. Fourteen putters? Have at it. As the kids like to say, you do you.”

If you’ve never tried getting out of a tough spot by using a left-handed club – or a righty, if you are left-handed — you might want to think about it unless you’ve already made that decision with your golf clubs.

I play a lot better now than when I tried using a lefty club for the first time, but I still occasionally find myself up against a tree or a fence, or something, that makes it tough for me to swing with a right-handed club.

And being able to advance your ball 75-100 yards instead of a few feet can definitely save a stroke or more.

Email me at me at bmeadows4sports@aol.com