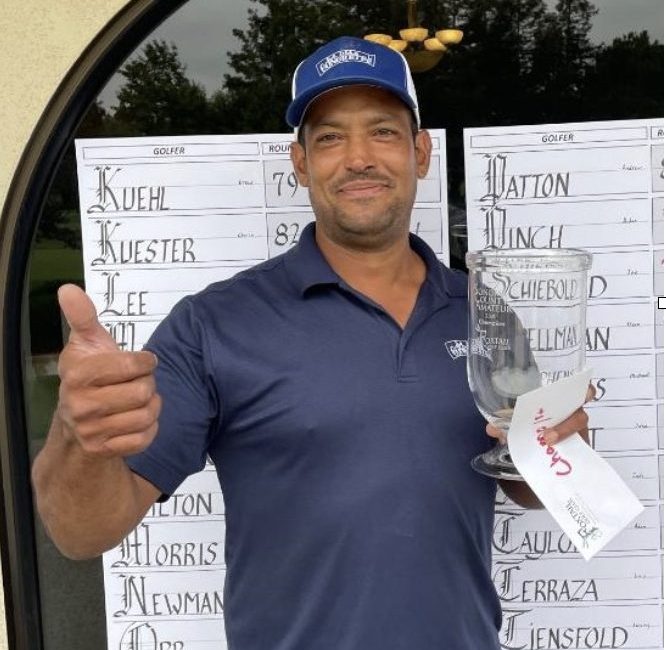 Congratulations to the winners in the 2021 Sonoma County Open held at Foxtail Golf Course in Rohnert Park May 15-16.

The two-person scramble, created in honor of the U.S. Open, is sponsored by Srixon/Cleveland/Asics.

The Seawolves, who finished third in the West Regional to qualify for the national tournament, started strong on the third and final day, but had a tough time on the back nine and finished in 11th place out of 16 teams.

“The team had its best start of the week and put themselves in a good position for the back nine,” said coach Val Verhunce. “Unfortunately, with the winds gusting at 30 mph, our last four holes did us in.”

Senior Devin Gregg and sophomore Griffin Pace finished the tournament tied for 28th among all golfers.

There are a lot of signs – literally – on houses and street corners, etc. but not a lot of news on the fate of Bennett Valley Golf Course.

Talked with longtime BV golf director Bob Borowicz, who has a little insight into the situation.

“I’m under the impression that the City has changed direction —  in a good way,” says Bob, whose contract expires in June of 2022. “Plans to develop the property have been ‘shelved’ from what I’ve heard.”

He goes on to say, “they are studying what are the critical infrastructure needs/improvements that need to be made prior to’going out to bid’ for a new operator.”

The ad hoc committee that has been formed is working with a group of private citizens to figure out what is the best plan of attack, according to Bob, a Montgomery High grad and a fixture in the community.

“I have not been consulted by the City.  The information I receive is from the “Save BVGC FB Group” which is headed up by Dick Carlyle, his wife, and a few other folks.”

This is kind of a “no news is good news” appraisal, and it would look as though after an initial effort to somewhat quietly take down the only true 18-hole public golf course in Santa Rosa, there is some reason for optimism.

I’ve always enjoyed playing there for a lot of reasons, not the least of which is a really interesting variety of holes that challenge golfers to use all their clubs and come up with some creative shot-making.

“Much like all courses, Windsor is as busy as ever,” says Demian. “We recently flattened and expanded our range to accommodate more players.

“We are closer to normal spacing on the range as well to help alleviate the backup for range use.

“On the course, we have done extensive dead-tree removal followed by new planting in strategic locations.

“Our junior program is as popular as ever, and we are offering four camps this summer and one in July is already sold out.

“The adult clinics through The Town Of Windsor will resume in June and I’m sure will be well attended.

“We are looking forward to the return of tournaments and the revenue they bring to the course and, more importantly at this time, the restaurant.

Demian closes by adding, “At Rooster Run we have partnered with Starting From Scratch to facilitate special events and a few on-course food-and-beverage options for golfers prior to teeing off or making the turn.”

Difference Between a Municipal & a Public Golf Course?

Many golfers dream of having the opportunity to play one of the many celebrated private courses in the United States, such as Pine Valley in New Jersey; Shinnecock Hills in Southampton, New York; Riviera Country Club in Pacific Palisades, California; and Augusta National Golf Club in Georgia.

But challenging golf experiences on memorable layouts are also available at courses open for public play. According to the PGA of America and the World Golf Foundation, 80 percent of all golf rounds are played on courses that are open to the public, including municipal courses.

Municipal courses are owned and/or managed by the city, town or county.

Although municipal golf courses may earn money, cities and counties typically do not have a profit motive. Their primary mission is to provide reasonably priced outdoor recreation for local residents. (BV detractors take note!!!) Municipal courses use their revenue sources to pay for the maintenance of the course and facilities, including staff salaries. Privately owned public courses are usually managed for profit.

Municipal courses typically offer motorized cart rentals, but many do not require golfers to use carts. Public courses are more likely to require cart rental. Municipal courses also may offer only limited food and beverage options such as snacks and soft drinks to avoid the expense of operating a restaurant, while public courses are more likely to have full-service restaurants and more extensive golf shop merchandise

Major golf championships have historically been played at private courses instead of municipal golf facilities, but that has begun to change in recent years, as the USGA has started to select more public courses as venues for its championship events.

PGA tournaments are held at a mix of private courses and public courses, including a few muni courses such as Torrey Pines. In recent years, higher-quality public and muni facilities have been built or older courses have been redesigned and upgraded to be tournament-quality

Tiger Woods’ golf future: Is a comeback even possible?