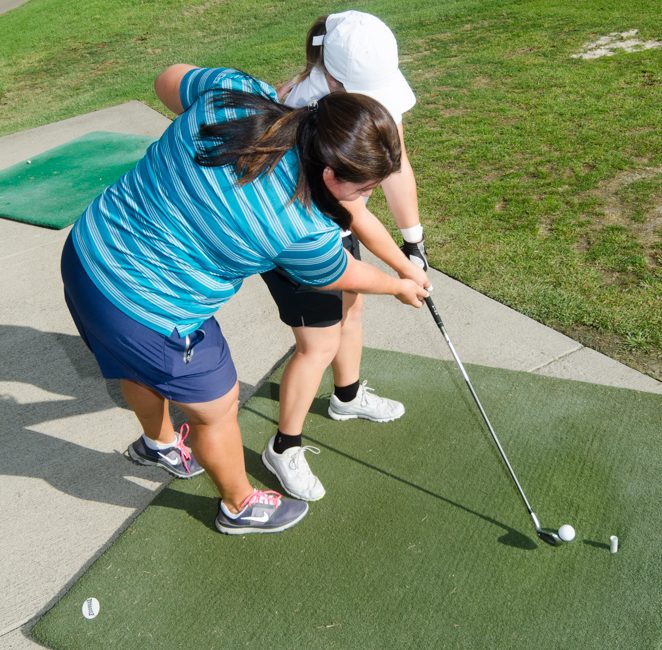 Women should take golf lessons from women, and men should take them from men, right?
Not so fast.
While some women may feel more comfortable receiving golf instruction from other women, a growing number of men have opted for women teachers.
“I think it’s a personal preference for women, like selecting a doctor,” says former Montgomery High and University of Texas golf standout Jessica Reese-Quayle, who now teaches locally at Oakmont and Foxtail.
“I’ve had women take lessons and their husband comes along and ends up getting lessons from me, too,” recalls Reese-Quayle, who played on the LPGA Tour for several seasons before a wrist injury ended up playing career. “A lot of guys seem reluctant at first, but then they see me hit the ball and figure I know what I’m doing.”
Jessica has always been known as a long hitter and the 33-year-old has not lost that ability to move the ball impressive distances.
“The men I work with are mainly self-taught,” says Molly James, a longtime instructor at Windsor GC. “Because of that, a lot of them come to me with faulty fundamentals.”
James recalls one man who signed up his wife for instruction, “then spent the first lesson critiquing my teaching style. He was really a jerk at first . . . I could tell he was testing me, kind of a control thing.”
Molly, like Jessica, says the ratio of women-to-men students for her is about 60-40 percent but has steadily grown to include more men.
James and Reese-Quayle agree that the key to providing helpful instruction has a lot to do with getting to know the student, something that they say is stressed by the LPGA.“I had a lesson with a guy who had been to a lot of men instructors,” explains James. “He said it was the first time he really understood what he was doing wrong. That’s not to say the same thing couldn’t happen with a male instructor.”
Jessica relates a similar story involving a man who had gone through a lot of male instructors over a 30-year period, but she was his first female.
Will Trbovich, who had seen Jessica playing at Oakmont since she was a teen-ager, said he was struggling with his game, that it had leveled off.
“It was unique for me, but I scheduled a lesson with her,” recalls Will. “The driving range was closed so we went out to the first hole.”
He teed up a ball and hit it, then hit another, “then she told me she thought she could fix what was wrong,” says Will, who runs an auto repair shop — Acurit Auto Repair — in Rohnert Park. “On my backswing I wasn’t keeping my thumb and index finger together. So we fixed it and I was down from a 20 to a 16 handicap in three weeks.“Trbovich said he had recently been to a male instructor “who was a nice guy but had me hitting a lot of weird shots that didn’t help me at all.”

Will he go back to Jessica if the dreaded slice comes back? “No doubt about it,” he says.
What impressed Trbovich is what both Jessica and Molly stress — getting to know your student.
“I was impressed with Jessica because she asked me a lot of questions about myself that had nothing to do with golf,” explains the 69-year-old Trbovich. “She asked me about hobbies, what I did for a living . . . she really made an effort to understand me as a person, not just a golfer. She made me feel comfortable.”Jessica remembers one male student who had lived with a serious slice for as long as he had played golf.
“By the end of his first lesson, we had gotten his slice back to a nice draw,” she says. “He sent me an email later saying ‘my life has changed,‘ which meant a lot to me.”
James and Reese-Quayle agree there has been a misconception about it being better for women to take lessons from women, men from men, but that the situation has slowly changed although peer pressure can play a role.“I was giving lessons to one guy, who told me his buddies were giving him a hard time for taking lessons from a woman,” laughs James. “I told him, you’re a grown man (age 40) so make up your own mind.”
“He kept coming to me for lessons even though I think his friends continued to give him a tough time,” says James.The reality is that there are good and not-so-good teachers, male and female, and the key is finding one who really gets to know you, one who helps your game and just isn’t it in for the money.

“I would never change my teaching style based on gender,” explains James. “I adapt to the student, who are all different for various reasons.  Women tend to listen better and don’t rely on brute force. They rely on more technical swings, not just creating force.”

Reese-Quayle, married (CJ) with a 4-year-old son (Austin) and living in Kenwood, started out at Chardonnay but now teaches at Foxtail and Oakmont. She has also worked with her longtime friend, Val Verhunce, a pro and SSU’s golf coach, helping the Sonoma State women’s team.James, married in 1995 (Chris), turned pro in 1990 and has been working at Windsor since 1989. The James have two daughters — Kasey, a 17-year-old senior at Windsor High and Jessica, an 11-year-old fifth grader. She has also worked with the SSU women’s team as well as local high school players, much the same as Reese-Quayle.Molly was an all-round athlete at Terra Linda High in Marin County, playing soccer, basketball and softball and also playing soccer at St. Mary’s during a period in 1984-86 the team won two national titles.

If you have suggestions for future golf features or interesting golf items, including information on tournaments, clinics, special offers or anything golf-related, please contact me at bmeadows4sports@aol.com or bmeadows4golf@aol.com
bruce meadows,female golf lessons,golf 707,golf instruction,jessica reese-quayle,molly james
Share