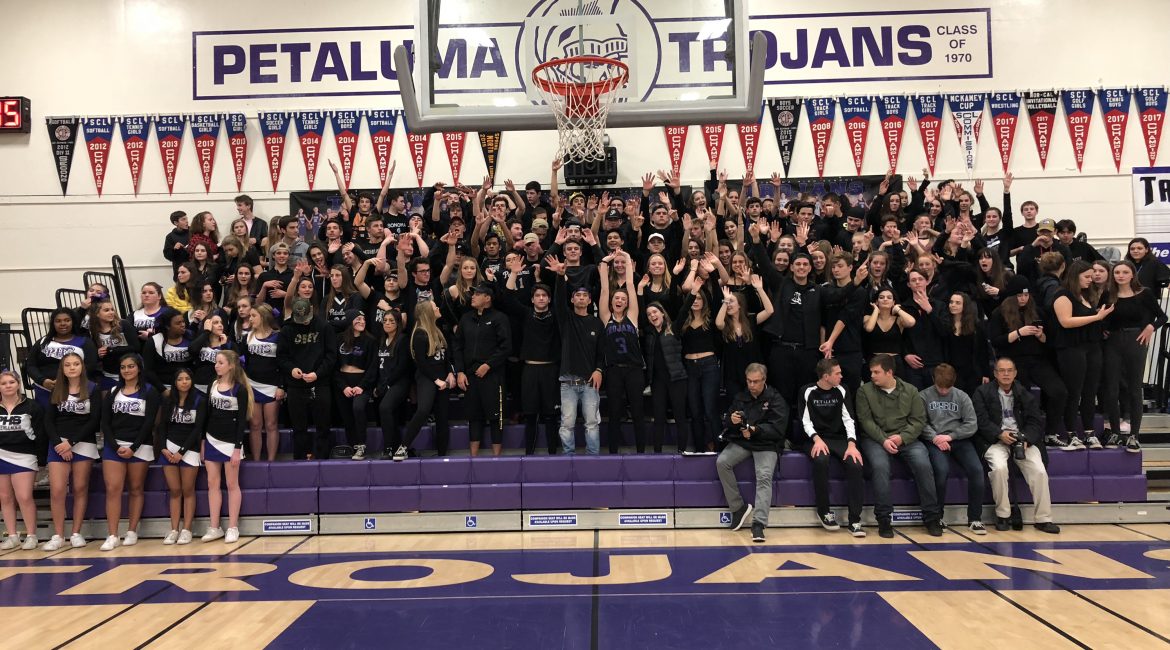 The Redwood Empire’s Battle of the Fans was established in the fall of 2014. The goal was to bring positive sportsmanship to High School Basketball games, which many say, had become too mean spirit, and often leading to altercations.
After this was instituted, I saw a major change in the intention of student section cheering. It was deprived from the college basketball games, and eventually trickled down to having student leaders lead their high school’s section. The first winners of the program, Santa Rosa for the NBL and Analy for the SCL showed this. The cheer’s have been a lot more positive, and there has been increased student attendance all across Sonoma County.
Let’s give some statistics now. Of the teams I’ve looked at, every team has at least 20 wins at home over the course of the last 3+ seasons, Dating back to the start of the 2015-16 season to the present. These six teams I’ve researched have been consistently good. Petaluma, who has had a renaissance in recent years, posting a 23-6 record at the loud Fair St. Gym in Petaluma. Healdsburg in their cozy small gym has a 25-7 home record.Analy has had the fewest losses at home in the SCL in the past 3+ years. They have been 24-4 at the Tiger den, with three of those losses this year, but before, they went 12-0 at home last year. Cardinal Newman, led by Bon’s Army has been 26-4 at the John Fitzgerald Gymnasium. Montgomery at the Viking Dome has the most losses, but has been 27-9, getting deep into the NCS Playoffs every year. Windsor has the most wins, but also has played the most games, winning 33 of 40 games in their gym in that time period.
What does this mean? It means that home court advantage is real in high school basketball. Student Sections are a huge part of it. They provide energy that fills the building. No matter how small the section in how big the gym, the kids are loud and spirited, and I love it.
This year, there have been some unfortunate instances. Fans have gotten into non-physical altercations after the games, shouting matches, and technical fouls have been assessed to student sections. In no way shape or form am I criticizing the BOTF or saying they are doing a bad job, but it could be a concern if continued. No blame is to be placed, except for the students themselves to better police themselves during games.
No doubt the BOTF has been instrumental in changing the culture of student section cheering and in some places, changing the school’s culture. The winners of the BOTF, Piner HS, and Montgomery HS, showed these traits and changed their school’s culture. The other finalists, Cardinal Newman and Petaluma also showed these traits, but Piner and Montgomery set themselves apart from the rest.
Follow me on Twitter @Mikebault
Share
Copyright (c) 2016 Splash.
Theme by StylemixThemes.