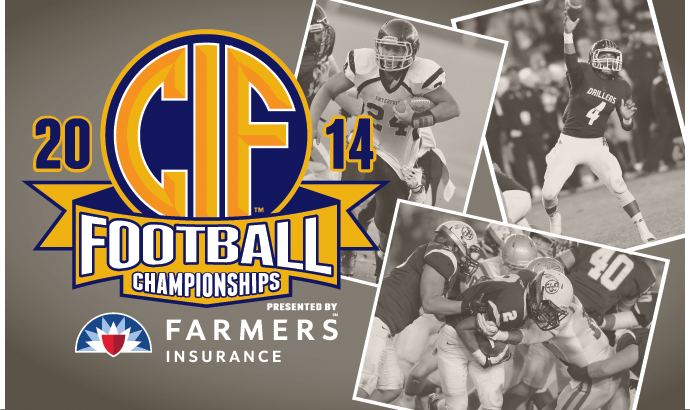 CARSON – The 2014 CIF State Football Championship Bowl Games, Presented by Farmers kicked-off Friday night with the Division IV and Division I games, followed by the Division III, Division II and Open Division games on Saturday. Below is a recap of the weekend’s action.

Antoine Custer led the Spartans with 353 all purpose yards, 268 yards rushing and 4 touchdowns. Andrew Hernandez also rushed for another 175 yards with 3 TDs. Chris Vanderklught and Devin Asiasi rushed for the other 2 scores of De La Salle’s 9 rushing TDs.

Anthony Catalano threw for 172 yards with a long of 87 to Javon McKinley for a touchdown. JJ Taylor rushed for 133 yards of his 200 all purpose yards for the night. McKinley led the Huskies with 245 all purpose yards (153 receiving, 2 TDs) in the loss.

Division I:  Folsom 68, Oceanside 7
For the first time all season Folsom (16-0) did not lead from start to finish, however they scored 68 unanswered points to defeat Oceanside 68-7 for their first Division I State Championship. Jake Browning, 44-2 as a starter, capped his record setting career by throwing for 445 yards and 6 touchdowns. He completed 27 of 34 passes and scored Folsom’s first touchdown on a four yard run to tie the game 7-7 in the first quarter.

For Oceanside, Matthew Romero threw for 166 yards and Josh Bernard gained 52 yards on 15 carries. Isaia Paopao tallied 7 tackles for the Pirates who complete their season 14-1.

The Wildcats Malik Lovette received the majority of Armando Herrera’s passes by receiving 154 yards of the 290 for the day. Defensively, Turner Shreve recorded 16 tackles for Redlands East Valley.

Division III:  Campolindo (Moraga) 35, El Capitan (Lakeside) 28
Campolindo claimed their first State title as they came from behind to defeat El Capitan 35-28 in the Division III Championship game. The Cougars 21 fourth quarter points secured the win as they finished the season undefeated.
El Capitan (14-1) tied the game late in the first half, 7-7, before exploding for 21 unanswered points in the 3rd quarter. Francis Lima caught a Brad Cagle pass from 24 yards out for a 14-7 lead, then Sam Melero returned a blocked FG 80 yards down the left sideline for a 14 point advantage. Isaiah Capoochia extended the Vaqueros lead to 28-7 with a 13 yard scamper.

Campolindo cut the deficit with 46 seconds remaining in the 3rd quarter on a Jack Stephens to Adam Remotto pass play. After an El Capitan three-and-out, the duo connected again from 13 yards out to pull within one score. The Cougars defense stood tall again, forcing the Vaqueros to punt. Stephens led Campolindo 61 yards for the tying score, eventually finding Max Flower in the corner of the end zone from 14 yards out.

Sam Melero’s kick return gave El Capitan great field position at their own 45 yard line. Capoochia, who finished with 41 yards rushing, carried the ball six times on the final drive and Melero’s 22 yard run gave the Vaqueros a first down at the Cougar 12 yard line with just over a minute to play. On the ensuing play, Capoochia was stacked up on a play to the right and fumbled the ball. Campolindo’s Remotto scooped up the ball and rumbled 85 yards for the go ahead score. El Capitan fumbled the kickoff and Campolindo recovered. The Cougars ran out the clock for a thrilling 35-28 victory.

Dennis Smith led the Vaqueros with 80 yards rushing on 17 carries. Brad Cagle, who left in the 2nd quarter with a bad ankle, returned after halftime finishing 7 of 13 for 89 yards and 2 touchdowns. Nick Fadelli finished with 56 yards on the ground for Campolindo while Stephens threw for 291 yards and four TD’s.

Central Catholic rushed for 240 yards with Kalhiel Dillard leading the rushing attack with 83. Hunter Petlanksy was 11-for-19 throwing for 168 yards and 2 touchdowns to Jared Rice. The Raiders defense was led by Miguel Hernandez with 2 of Central Catholic’s 4 sacks and 3 tackles along with Rice’s 7 tackles and 2 interceptions for 53 yards.

The St. Margaret’s offense was led by George Krantz who was 17-for-27 with an interception and 2 touchdowns.