A TASTE OF THE HIGH SCHOOL FOOTBALL SEASON 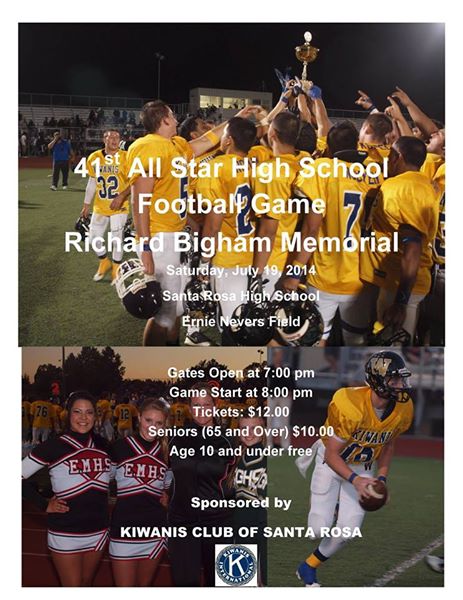 It is the unofficial beginning of the 2014 School Sports Year.   Yes, we are getting that close.   It is also one last chance to show off for the Senior Class of 2014.   It it the 41st Annual Richard Bigham Memorial All Star Game, presented by the Santa Rosa Kiwanis Club.  It will be played on Saturday Night at Santa Rosa High School.    Kickoff is at 8pm.   The game will have a different look from seasons past.     Instead of having leagues or counties go against each other like in years past, this game will feature a good ole game between the North and the South.


The North team consists of players from Cardinal Newman, Elsie Allen, Maria Carrillo, Montgomery, Piner, Santa Rosa, Ukiah and Windsor.  Piner and Santa Rosa each have six players while Maria Carrillo and Montgomery have five each.   The South is made up of players from Analy, Casa Grande, El Molino, Petaluma, Rancho Cotate, Sonoma Valley and St. Vincent.   Casa Grande, who is the defending North Bay League champions, has 11 players on the roster, while defending Sonoma County League champion Analy has nine.  St. Vincent, who tied Calistoga for the NCL II championship, is the only school from the NCL II World.   The game started in 1974 and has been played every season since, except for 1979.  From 1974-1991 the game was between Sonoma and Marin.   Then in 1992 it was changed to a game between the North Bay League and Sonoma County League.

Both series turned out to be close.   Sonoma County won the series with Marin 8-7, winning the last four games.   The NBL-SCL series ended in an 11-11 tie, with the NBL winning four of the last five seasons.   To show how close how close it is getting, the school year starts one month from Sunday.   Football wise, official practice begins on August 11th.   The season begins on Friday August 29th.