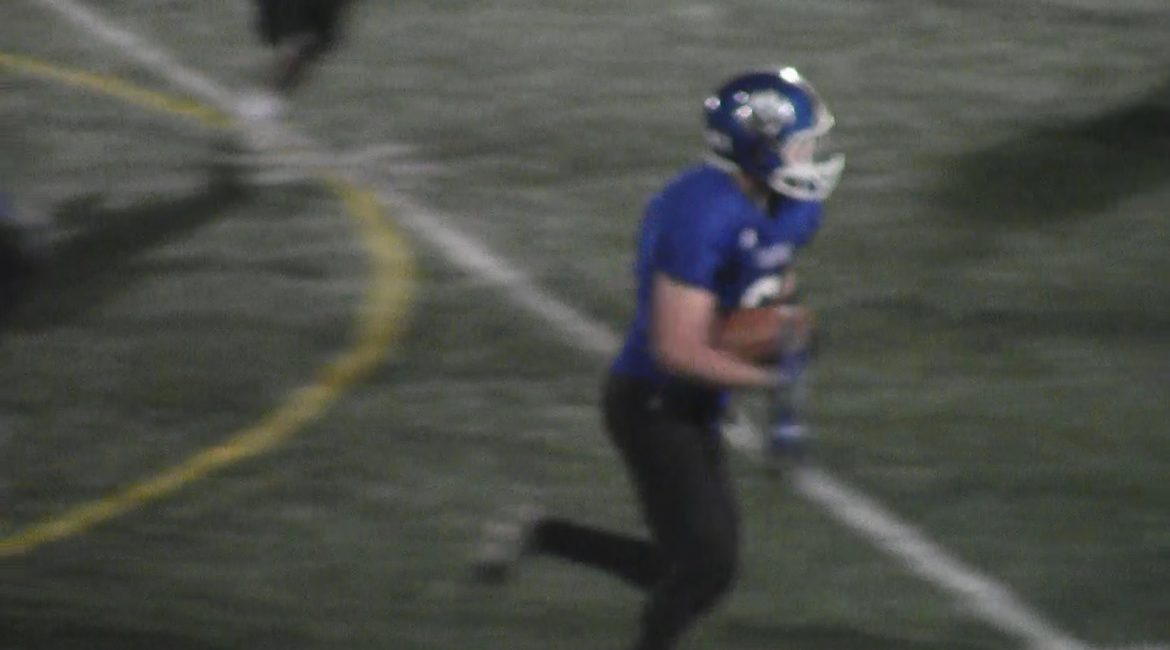 It took Analy a little more than a half to look like the team that got them to the NCS Division 3 championship game.
By then it was too late.
Two early missed opportunities, dropped passes and other un-Analy like things, put them in a hole they couldn’t dig out of.  Although they made a spirited rally in the second half, in the end Campolindo held on for 38-28 win to take its second straight NCS Division 3 championship in a game played at Diablo Valley College.

The tone for the first half was set early and in a normal Analy football game, things would have gotten off to a good start. Campolindo received the opening kickoff, bobbled it and started the game at its own 8 yard line. After a three and out, Analy had the ball in Campolindo territory and before you knew it they had it first and goal at the 3. Ninety five percent of this season, maybe even more, that would mean an Analy touchdown.
This time though an intentional grounding penalty set them back and forced them to settle for a 28 yard field goal. After what happened, they would have gladly settled for that. The kick was blocked and they came away with nothing.
Next was chance number two. Analy’s defense stopped Campolindo without a first down and Analy was driving again. This drive ended when Jack Newman had his pass intercepted in the end zone. It was only Newman’s seventh interception of the season.
Analy had two chances to get the game going in the right direction and came away with nothing.
Campolindo wouldn’t give them another chance. They have an offense that averages nearly 40 points a game and the third time they got the ball they started showing why. Jacob Westphall threw a 43 yard pass to Kannah Cruikshank to get them rolling. Two plays later, they scored on a 13 yard pass to Madison Young and with a little over four minutes left in the quarter, Campolindo had a lead they wouldn’t lose.
For the rest of the half, Campolindo was unstoppable, and outside of one drive, Analy didn’t do much on offense. Westphal threw another touchdown pass, running back Jack Cassidy scored two touchdowns and Campolindo was in full control with a 28-0 lead with a little less than three minutes left in the half.
It wasn’t just the Campolindo defense that stopped Analy. At times, the Tigers were their own worst enemy. On the possession after Campolindo went ahead 14-0, Analy dropped four passes, one of them looked like it was headed for a touchdown. That was followed by a 13 yard punt, which set Campolindo up in good field position.
Down 28-0, Analy showed a pulse. A 35 yard run by Osiris Zamora set up a 45 yard touchdown pass to Spencer Vogel to cut the lead to 28-7. That came with 1:46 left in the half and with Analy having the ball to start the second half, they were looking for a stop to keep some form of momentum going.
They didn’t get it.
Matt Blair kicked a 27 yard field goal on the last play of the half to make it 31-7. The first two times they had the ball, Campolindo had eight yards of total offense. The rest of the half they gained over 300.
The third quarter started like it was going be a Campolindo stampede. After a false start penalty, Analy lost a fumble on the first snap. At that moment, Analy started being more like the Analy team we have seen all season. The defense made a stop and the offense went on a nice drive that ended on a 1 yard run by Isaac Kangas.
That started quite a segment for Kangas, who scored touchdown number two on another one yard run on the second play of the fourth quarter to cut the lead to 31-21 and had Analy fans thinking miracle. They were really thinking miracle on the next series when Kangas intercepted his third pass of the season. For the first time since the first quarter it felt like a game.
Analy had opened the second half with a full spread offense and it appeared to confuse the Campolindo defense. The Tigers drove for a couple of first downs and moved into Campolindo territory. But a sack put them in a tough spot and they ended up turning the ball over on downs.
Then Campolindo put things away. A big run by Niki Moore gave Campolindo a first and goal at the 5.  Moore, who blocked Analy’s field goal, rushed for a game high 138 yards. Analy’s defense made it last stand until on a 4th and goal, Max Flower caught his second touchdown pass and the game was out of reach.
Analy did pull off a pride drive to end things. Newman hit Lucas Houseman on a nine yard scoring pass with :19 left for the final score of the game and the season.
It was Newman’s second touchdown pass of the game and gave him 326 yards passing on the night. Schuyler Van Weele was the leading receiver with ten catches for 107 yards.
So for the second straight season, Analy’s undefeated season is ended by Campolindo. Last year it was the last five minutes of the game that doomed them. This season was the first five minutes.
Analy ends up 13-1 on the season and can have the pride of being in the school’s first ever NCS Championship game.
Campolindo is also 13-1and move onto the Nor Cal playoffs.
NCS DIVISION 3 CHAMPIONSHIP GAME
No. 1 Campolindo 38 No. 2 Analy 28
Analy ends the season 13-1
NCS DIVISION 4 CHAMPIONSHIP GAME
SATURDAY—7:30 PM AT RANCHO COTATE HIGH SCHOOL
No. 1 Marin Catholic (11-1) vs. No. 2 Cardinal Newman (11-2)
My email address is jacpasquini@comcast.net