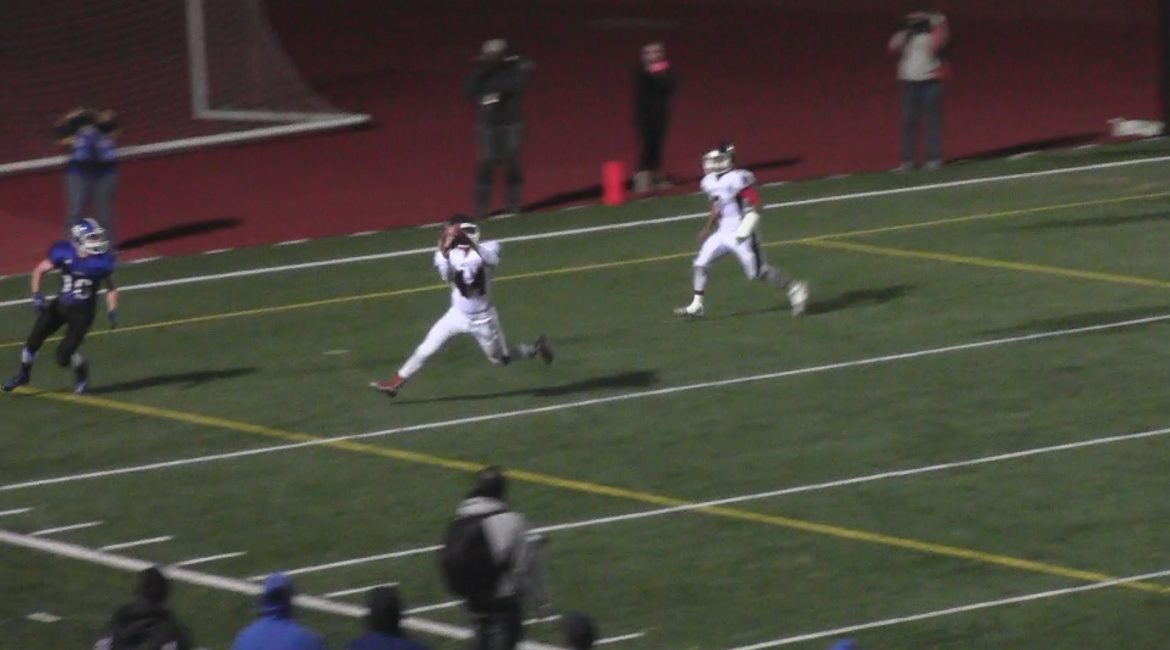 The NCS Division 3 Semi-Final between Analy and Rancho Cotate was billed as an offensive show. For the most part, it lived up to that. But with the game on the line in the fourth quarter, it was the Analy defense that came up big, returning two interceptions for touchdowns to seal a 45-27 win and get them to their first ever North Coast Section Championship game.


Rancho Cotate scored a touchdown with eight minutes left to cut Analy’s lead to 31-27. The Rancho Cotate defense held and got the offense back the ball with five minutes left, setting up what looked like a dramatic finish. It turned out Analy’s defense would take care of the dramatics. Schuyler Van Weele, who is Analy’s leading receiver on offense this season, intercepted his first pass of the season and used his receiver moves returning it 50 yards to give Analy a two score lead with 4:29 left.
Considering how Rancho Cotate’s offense can score, there was still hope. That ended two plays later with an exclamation mark. Isaac Kangas, who scored the first touchdown of the game, intercepted his second pass of the season and returned it 58 yards for another score. The two touchdowns were thirty three seconds apart.
Analy took a 14-13 lead midway through the second quarter, which turned out to give them the lead for good. After Jordan Parks kicked a 21 yard field goal to give them a 17-13 halftime lead, Analy took control early in the third quarter. Rancho Cotate failed on a fake punt, which gave Analy the ball in scoring range. The Tigers took advantage of the break. Osiris Zamaro scored his fourteenth touchdown of the season to make it 24-13 with 10:29 left in the third quarter.
It was playing catchup the rest of the way for Rancho Cotate, whose offense was basically getting the ball into the hands of Chris Taylor Yamanoha. He scored the Cougars first two touchdowns of the night on pass plays of 63 and 60 yards, the second turned out to give Rancho Cotate its only lead at 13-7 early in the second quarter. Taylor Yamanoha caught touchdown number three on a thirty one yard play and ran in a two point conversation to cut it to 24-21 with 7:03 left in the third quarter. On the night he caught 13 balls for 183 yards.

Taylor Yamanoha also makes an impact on defense and he did on the next series recovering a fumble and it look like Rancho Cotate had the momentum. But the Analy defense came up with a stop and on the next series, Lucas Houseman caught a 40 yard pass, which set up a seven yard run by Osiris Zamora to give Analy a 31-21 lead with under a minute to go in the third quarter. Houseman picked a good night to have his biggest receiving game of season, catching nine balls for over 200 yards. It is the most catches he has had in any game and the second game that he had triple figures in receiving yards.
Moziah Ward followed with his 15th touchdown of the season to cut the lead to 31-27 with eight minutes left, which set up the Analy defensive dramatics that put the game away.
Before the two interception returns, it looked like the Analy offense would again steal the headline. Jack Newman had another big game passing for over 450 yards. It is the second straight game he has passed for over 400 yards and Zamori rushed for over 100. The Tigers had over 600 yards in total offense.
Until the faithful fourth quarter, Rancho Cotate matched them to stay in the game. Gunner Mefferd passed for over 300 yards and Ward was well over 100 yards rushing.
Rancho Cotate ends the season 9-4 and it also ends the career of Mefferd and Taylor-Yamanoha. Those two left an impact on Rancho Cotate history, basically rewriting the school’s record book for their positions.
For Analy this is now officially a historic season. This has been quite a four year run that will go down in Redwood Empire History. This team has accomplish something that the other three didn’t and that is go 13-0 on the season, which is the first time in school history and that other first, playing for a North Coast Section Championship.
Analy will meet No. 1 seed Campolindo next Friday night at Diablo Valley College. Campolindo had a tight game of its own, scoring two fourth quarter touchdowns to break a 13-13 tie and defeat Bishop O’ Dowd 25-13.
NCS DIVISION 3 CHAMPIONSHIP GAME
Friday December 4th at 7 pm
No. 1 Campolindo (12-1) vs. No. 2 Analy (13-0)
AT DIABLO VALLEY COLLEGE
My email address is jacpasquini@comcast.net
Follow me at twitter @homer2612
Share