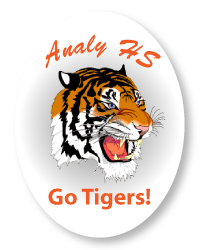 The Analy Tigers didn’t fool around.

They knew a win over Elsie Allen would give them their second straight Sonoma County League Baseball Championship outright.    They have had several games that went down to the wire and go into extra innings.   They wouldn’t let that happen this time, scoring five runs in the first as they went on to  defeat Elsie Allen 13-3.

The big hit of the first inning rally was a three run inside the park homer by Kyle Earley.  Earley, who went into the game with 8 RBI on the season, would later have a drive in two more with a single to give him five on the day.  The homer was the Senior’s first of his school career and since it was Analy’s last regular season game, it came on Senior Day.

Not a bad memory for him is it?

The win was Analy’s twelfth straight and gives them an 18-4 record overall.    The Tigers will try to wrap up their second straight undefeated run through the SCL race, when they go to Healdsburg Friday Night.   Before that they have a Non-League game at San Marin today (Wednesday).   This is an important non-league between two NCS Division 3 teams.    In the power rankings Analy is No. 3 in the Division and San Marin is No. 8.

With Analy on the verge of its second straight undefeated league championship, it is easy to think they have been a dominant program.   That isn’t the case.   Last season was the Tigers first SCL championship since 2001 and was the first time they finished over .500, both overall and in league, for the first time since 2009.   In 2011, Jeff Ogsten first year as manager for team, they went 4-19 overall and 1-11 in SCL play.