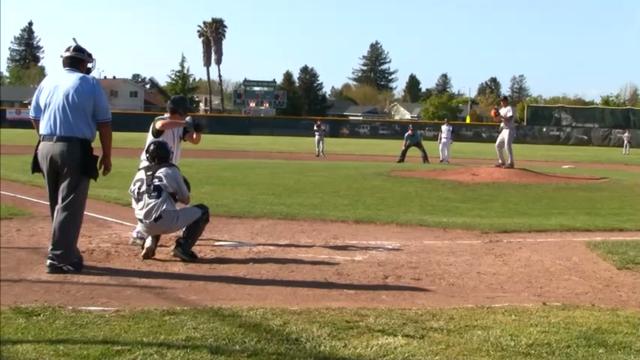 As we got closer to the Analy-Petaluma baseball event I was wondering if I over-hyped it.

I would like to thank the members of the Analy and Petaluma baseball teams, both Varsity and Junior Varsity, for making it virtually impossible to over-hype what happened.

All four teams not only added to the show they put on the first time they got together, they exceeded any expectation that could have been put on them.

On the varsity side, it took about 15 minutes to finish a game that was suspended on March 25th, after going nearly four hours, eleven innings and ended  a day that had turned into night tied at 7-7.

The action this day started at 3 pm and it was oer so fast that the regular game, after a 15 minute break, started before the 4pm start time, which was on the original schedule.

On March 25th the final seven innings were scoreless.   It took Petaluma six pitches tochange that, breaking the tie on a RBI double by Harrison Royall.

The excitement for Petaluma was short lived as they failed to get an out in the bottom of the inning. A walk, a single, a passed ball and a two run shot to center by Evan Hill gave Analy a 9-8 win.

It almost seemed unbelievable that after everything that had happened, that the game was over just like that.

What was about to happen next was even more unbelievable.

High school life is about getting an education and preparing for life.   It is also about life time friends and memories.  These kids made a special one being involved in this.   All of them did.   But the winning hit was just the beginning for the Hill family, which has twin brother Evan and Garrett on the Analy team.  Pity the future grand kids that will over and over have to live through the stories about this event.

Evan started the memories with the winning hit and then was Analy’s starting pitcher in what turned out to be a game that could be considered a,”you haven’t seen nothing yet kind of game.”    The starting pitcher for Petaluma was Hunter Williams and the two put on an epic pitching duel, that they wouldn’t finish.

Williams, who is 5-0 on the season and had his worst outing of the season when he started the suspended game, pitched eight scoreless innings, throwing 134 pitches, giving up four hits while striking out seven and walking two.

Hill matched him zero for zero, throwing 105 pitches, giving up two hits while striking out ten and walking two.

Evan was relieved by Garrett, who continued, which on normal conditions would be considered an epic pitching duel, with Dante Del Prete of Petaluma.  When Del Prete came, in the first thing he did was strike out the side in the ninth inning.

Finally in the top of the 15th, Analy scored on a wild pitch.  The person that scored the run was Garrett, who then went out in the bottom of the 15th and retired Petaluma without allowing a base runner and getting two of the three strikeouts that he got in the six innings he pitched.

So to sum it up for the twins on the long day, they combined to drive in the winning run in game one, pitch all the fifteen innings in game two and the other twin was the winning pitcher and scored the winning run.

Quite a day wouldn’t you say?

Meanwhile the JV didn’t take a back seat to the Varsity.  They also had their game on March 25th suspended after 11 innings.   No it wasn’t 7-7 like the varsity (isn’t this amazing enough), but a 1-1 game when things were called.   On Thursday, they went another five innings, before Petaluma took a 16 inning 4-1 win.   Then in the regularly scheduled game they went nine innings (slackers), with Petaluma taking a 5-4 win.

What might be forgotten after all of this is the influence this had on the SCL baseball race.  On the varsity side, both teams went into the long day of baseball undefeated in league play.  So Analy has a two game lead over Petaluma for the top of the league race.

All the players can take a nap.

Under normal circumstances the NBL Girls softball race would have been the big story, with the teams in a virtual six way tie playing each other.

After all the craziness, the race has a normal look to it as Maria Carrillo, Santa Rosa and Rancho Cotate all won and are in a three way tie for first place.

The closest game was Maria Carrillo holding off Cardinal Newman 4-3.   Robin Johnson pitched a complete game to raise her record to 10-3 and also had a leadoff double in a three run fourth that gave Maria Carrillo a 4-0 lead.

Brittney Veler, who was walked three times, started the game with a double and scored the first run.  She is now hitting .679 on the season.

Cardinal Newman rallied with single runs in the fifth, sixth and seventh and ended the game with the tying run on second base.

Rancho Cotate broke things open with an eight run fourth in a 10-1 win over Windsor.   Freshman Brittney Scardina pitched a complete game and is 11-2 on the season.

Santa Rosa defeated Ukiah 5-1, behind a four hitter by Denia Vera.   Santa Rosa scored two in the fifth and three in the sixth, to wipe out a 1-0 Ukiah lead.

The NBL baseball race can have a clear cut front runner after Friday.   Maria Carrillo goes to Casa Grande with a two game lead.   One of the teams they have the lead over is Casa Grande.

The other team is Montgomery who made it two wins in twenty four hours in thrilling fashion by scoring a runs in the bottom of the seventh for a 4-3 win over Cardinal Newman.

Matt Miller scored the winning run with two outs on a wild pitch.

Cardinal Newman scored two in the first and led until the bottom of the sixth, when Montgomery scored twice to take a 3-2 lead.  Cardinal Newman tied the game, when Alex Roeser singled for his third hit of the game, to drive in the run in the top of the seventh.

In the bottom of the inning, Miller singled, was balked to second , went to third on an error and scored on the wild pitch.

It was Cardinal Newman’s third straight loss, the last two on Wednesday and Thursday were by one run.