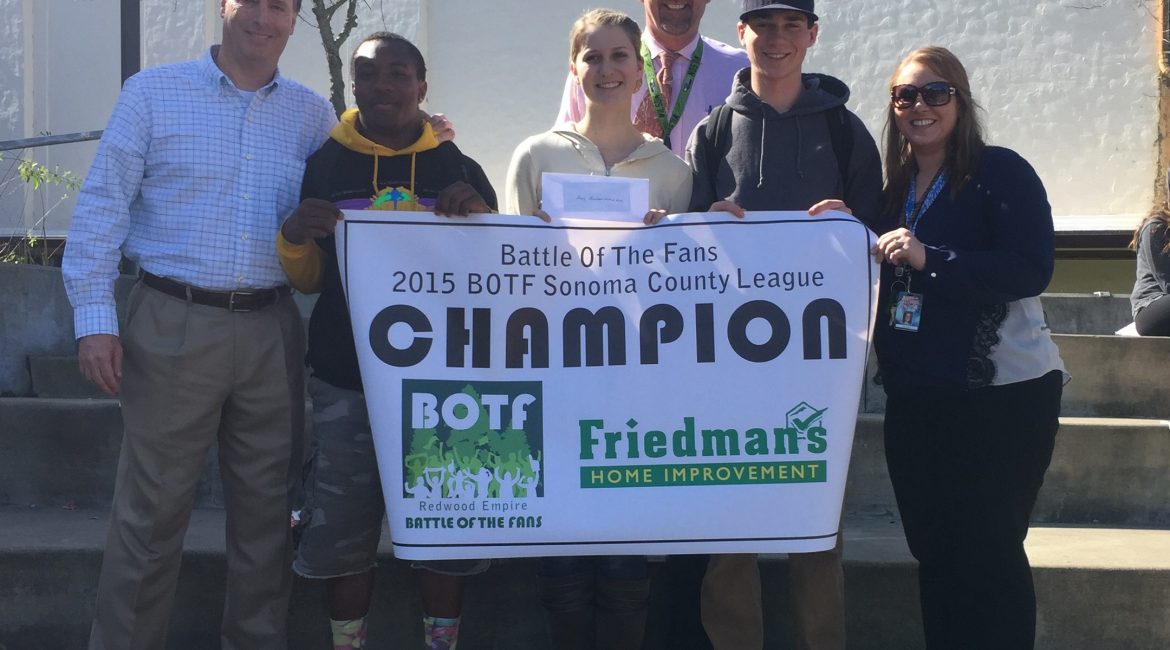 When JV basketball coach Steve Arrow was recruited by Montgomery High principal Laurie Fong to organize the first “Battle of the Fans for local high schools,” he admittedly wasn’t sure exactly where to start.
“Battle of the Fans,” based on a program in Michigan, was created to help instill positive fan attitudes at athletic events and to get more kids involved.
“We had seen a decline in attendance as well as more negative cheering than we wanted to see,” said Arrow. “We noticed a lot of seemingly benign but still inappropriate comments at games.”
So Arrow, in contact guidance from the people who run the Michigan program, called a leadership summit for the schools in the North Bay and Sonoma County leagues the end of October. He wanted to let student representatives and advisors know about “Battle of the Fans,” and he wanted to hear their ideas.
The area schools — all 15 signed on to the program — were asked to create a video showing what their school was doing to promote a more positive attitude, enthusiastic cheering and to get more students to athletic events.
Of the 15 schools eligible, 11 submitted videos by the deadline the end of January, with a committee of three local judges and Arrow looking and evaluating all of them.
While all 11 who submitted showed creativity in their efforts, the committee selected Elsie Allen and Analy from the SCL and Santa Rosa and Windsor from the NBL as finalists. All the videos had merit so the selection process was not an easy one.
The committee then conducted site visits to home basketball games at the four schools. After a lengthy evaluation session, Santa Rosa and Analy emerged as the top schools in their leagues this season.
“It was not an easy decision,” said Arrow. “Every school deserves credit for their efforts.”
“Last year there wasn’t much organization,” said activities director Erin Eliiott, who also teaches math at Analy. “We realized we weren’t as positive as we wanted to be and this gave us a chance to do something about it.”
Elliott, in her third year at Analy, said last year negative cheering was bad enough that there was a fear of possible fights when Analy played rival Piner.
“To go from that to this year, where we got together with Piner fans before the game was incredible,” she said.
John Kennedy, activities director and student government teacher at Santa Rosa, said “a lot of people at school thought we might win because Santa Rosa has a history of having a lot of spirit, but BOTF gave us a chance to be more positive, more creative . . . we wanted to connect the separate pieces of our school community.”

That included things like having the school choir sing the national anthem, which was a crowd pleaser.
“Cheer and student government here have had a rocky relationship in the past but this brought them together,” said Kennedy. “Our goal was to get groups together, students together.”
Maddie Martin, a junior BOTF leader at Analy, said showing improved school spirit was important because there seemed to be “a downturn in positive cheering.”
Martin said the goal was to get more students — from all grades — to athletic events, adding “we wanted for them to want to go to games.”
Kylie Oden, a senior class vice president and part of the leadership group at Santa Rosa, said involving various campus groups was a success.
“We used ArtQuest, our choir, our dance company, everyone we could,” said Oden. “This year it seemed like while we had strong school spirit as we always have, BOTF helped bring us all together.”
Arrow, with a financial assist from Friedman’s Home Improvement, provided BOTF banners for all schools, who had also originally contributed “seed money” to the program.
The top school schools received championship banners as well as $1,000 for their leadership programs.
“We got a later start than we should have,” said Arrow, who plans on getting the program going earlier in the fall. “All the schools have senior and junior leaders who have encouraged younger students to be part of this, so what we’ve established will continue.”
He said that nobody should get “hung up on winners and losers, because nobody who took part in this lost. The videos were all great and creative and we hope this year serves as an incentive for schools next year and beyond.”
As far as the future of BOTF, Arrow said the program might be able to use more financial support, and thinks it has had such a positive impact on schools that continuing is the right thing to do.
“The first time around was a challenge but well worth the effort and we consider it a resounding success,” said Arrow. “Building school spirit is such a good thing and when you get schools and principals and students supporting the concept, the program has legs.”
“We love the idea of winning this year but also the idea of improving school spirit,” said Analy’s Elliott. “”We hope it continues because we want to maintain the tradition . . . the kids are excited.”
“Winning was nice, but we felt we had already won before the announcement,” said Santa Rosa’s Kennedy. “To see more connections between students and groups was very satisfying.”
He added that while he’s pleased Santa Rosa is one of the 2015 standard bearers, “we did a lot of things on the fly this year and plan to be more organized next year . . . we are looking forward to what we can do even better.
Analy’s Martin said she’s talked to seniors “who feel bad they didn’t have this when they were sophomores . . . but we are all happy we had a chance to do this and it means a lot to our school.”
Santa Rosa’s Oden said she was excited when she heard about BOTF “because we are known for our super school spirit — win or lose — but this gave us a chance to really focus on being positive and including everyone we could.”
“This program has a long way to go,” said Arrow. “But this was a start, and now we have a foundation for the future.”