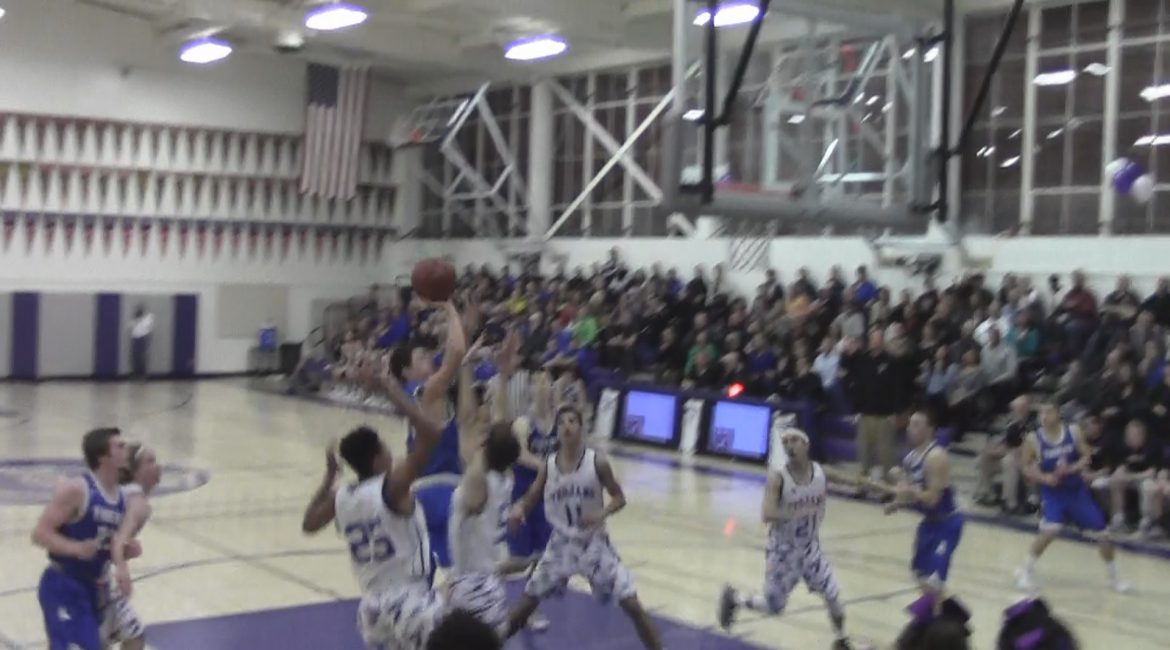 You couldn’t ask for a better high school basketball game. With first place at stake in the Sonoma County League Boys race in front of a near packed house at Petaluma High School, the game went down to the final seconds. A perfectly run inbound play left Travis Holmes wide open underneath for the game winning basket with :15 left in a 51-50 win for No. 2 Analy over No. 5 Petaluma. With the win Analy is on the verge of winning its sixth SCL championship in eight seasons.


It was senior night at Petaluma High School and for the eight seniors on the team it was a fantasy playing the league dynasty for first place. The vibes seemed right. The Petaluma JV team pulled off an exciting 42-41 win, which was followed by a well done ceremony. During the announcements a couple of the seniors said that the best moment was defeating arch rival Casa Grande at the big house across town. You know in the back of their mind, a change in the best moment was right in front of them. What the moment will be remembered as will be, “Dang”.
It was a game in which Petaluma led most of the way. They got off to a big start by scoring the first six points. Two of the three scores were after offensive rebounds as Petaluma pulled down the first seven of the game.
Petaluma had the lead the whole first half. In fact during the game, they trailed only five times with the biggest deficit two points. The biggest lead was 23-15 with 2:05 left in the first half. When they are looking back at this game, this will be one of the stretches they will look back on. They had pretty much controlled the game. After scoring the game’s first basket, Ryan Cox scored 10 of his team high 17 in the first half. His last basket made it 25-18 with 1:30 left.
That last 1:30 didn’t go well. Petaluma had the ball twice down the stretch and shot air balls each time. After the first one, Analy’s Jordan Armstrong scored his only hoop of the half. That isn’t saying that Armstrong wasn’t a factor in other ways. He was one of the few Analy players that could get a rebound. Analy was outrebounded 11-4 in the first quarter and 19-12 in the half. Armstrong had three of the rebounds in the first quarter and ended up with a team high 10. He did get help from Don Tripodi. who came off the bench and pulled down five of his eight rebounds in the second quarter, which stabilized that part of the game for the Tigers.
On the possession after Armstong’s basket, Petaluma coach Scott Behrs was trying to get his team’s attention to play for the last shot. He wasn’t heard and up went air ball No. 2. Analy rebounded and they ended up getting the last shot which was a basket by Nick Fujii, who would be heard from again in the second half.
So after controlling the first half, all Petaluma had to show for it was a 25-22 halftime lead. The momentum at the start of the second half would continue for Analy, as they scored the first two baskets to take their first lead of the game 26-25.
For the next quarter, it was back and forth with three lead changes and four ties. Cox then got hot again scoring seven points in a 9-0 run to give them a 44-37 lead with five minutes left. Cox had a two steals during the run, which he converted into baskets and the Trojans appeared on the verge.
A three point shot by Ryan Perez, part of his 14 point night, made it 47-40 with 4:25 left. That is when Fujii came up big. Petaluma would only score three points the rest of the way. Meanwhile Fujii hit three 3 –point shots, which gave him a game high 18 points. The last one cut the lead to 50-49 with :50 left. Petaluma then turned the ball over to give Analy its chance. On the first part of the possession Cole Murrin blocked his seventh shot of the night. The ball went out of bounds to set Analy up with :20.5 left. After calling their final time out they ran the inbound play to Holmes for the winning points.
Petaluma had one last shot, but missed and Analy rebounded. Petaluma was forced to foul but it was only its fifth team foul and with only a little over a second left, they didn’t have enough time to get Analy to the foul line and the Tigers had the thrilling win. WATCH VIDEO HIGHLIGHTS HERE
The lack of fouls was one of the themes of the game, an enjoyable theme. Analy wasn’t called for its first foul until there was 3:07 left in the first half. There was a total of six fouls called in the first half and for the game the two teams combined for 19 free throws. Analy hit six of seven, all in the second half.
Analy is now 17-7 on the season and 8-2 in SCL play. Piner moved to 8-3 by pulling away from Elsie Allen in the fourth quarter to take a 51-44 win over Elsie Allen with Scott Erickson and Jace Foster combining for 30 points. Petaluma sits in third place at 7-3. The Trojans are 15-8 overall.
Analy ends the league season next week with a home game with El Molino and a road game at Elsie Allen.
The following week is the SCL post season tournament. With the kind of race it has been this season, that should be a heck of a tournament.
My email address is jacpasquini@comcast.net