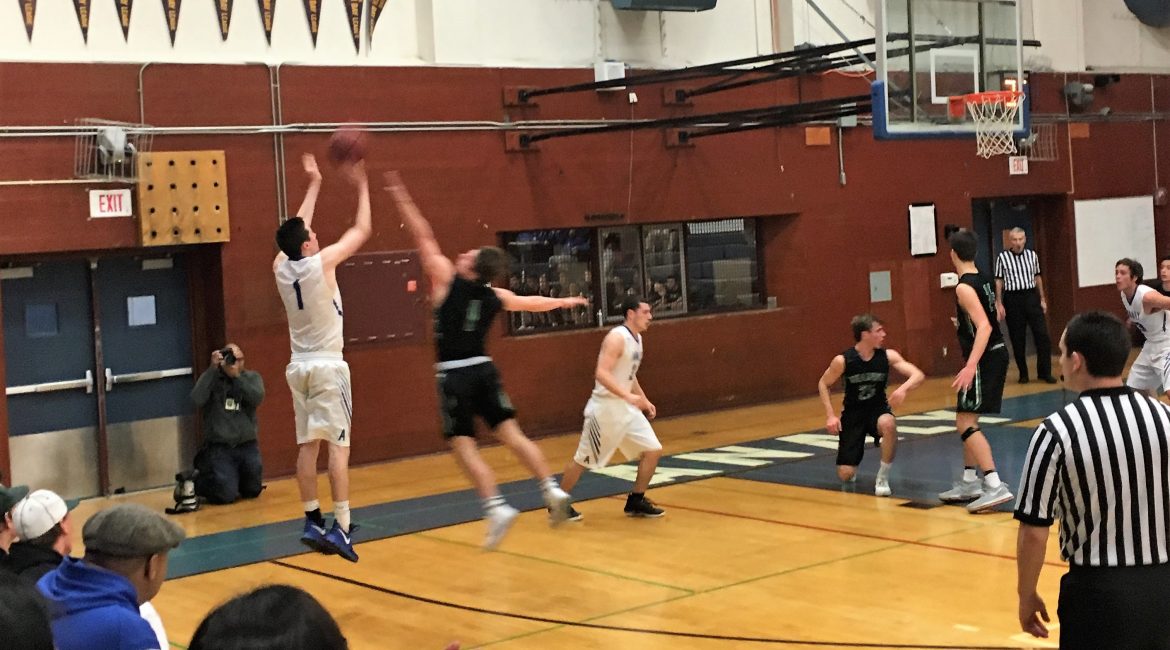 by Dale Watkins
The hottest team in the Empire, the Flying Tigers, arrived at their NCS quarterfinal game riding a tremendous 15-game winning streak. The host #3 seed would duel a formidable opponent in the #6 seeded Miramonte Matadors, who were actually favored in this matchup. A sluggish first quarter proved to be no problem for Tiger scoring machines Dom Tripodi and Aidan Toner-Rodgers to overcome, who led the charge offensively in a 54-43 triumph.


Miramonte’s 6’7” Charlie Hocking commenced the game as a man on a mission, going for 10 points in the first quarter with a variety of shots inside the arc. There was a lid on the basket for the frustrated Tigers early, who dug themselves into a hole trailing 17-5 at the end of 1.
But Dom Tripodi told his team “enough is enough,” stopping the bleeding by scoring the game’s next 8 points for the Tigers. Then, after a sweet turnaround jumper by Jack Newman, Aidan Toner-Rodgers buried a straightaway three off an offensive rebound. He then would drive coast-to-coast after grabbing the ensuing rebound, slicing through the Matador D, and making a sweet spin move in the lane before flipping it in with the left hand.
Another Miramonte turnover allowed the Tigers to burst out in transition, as Tripodi became the beneficiary of a cross-court pass and drilling a 3-ball from the wing. Analy’s spirit was back as the crowd rose to their feet as the Matadors called timeout. Tripodi closed the period scoring the final 7 points. The Matadors had no answer for such a scoring onslaught, who were outscored 26-3 in the 2nd quarter as the Tigers now convincingly led at the half, 31-20.
Tripodi kicked off the 2nd half with a beautiful baseline drive before hanging, and spinning in the beautiful up-and-under, avoiding Hocking’s reach. Toner-Rodgers took his turn offensively, swishing two 3’s, including a tough step-back with a hand in his face. But Charlie Hocking’s two baskets, as well as several made Matador free throws, allowed the Orinda team to hang around a bit, with a 3rd quarter score of 44-31 Analy.
Two more Tripodi buckets and another jumper from Toner-Rodgers gave the Tigers a comfortable lead and they did not look back. Crucial missed shots and several 4th quarter turnovers just deflated Miramonte as the period progressed. Hocking, with opportunities to cut the lead to single digits with under four minutes to go, then missed four straight free throws. This one was in the books, as the Tiger faithful celebrated a 54-43 final.
Analy as a team would shoot only 35% from the field to the Matadors’ 45%. Dominic Tripodi dropped 27 points, including 4 shots from downtown. Aidan Toner-Rodgers notched 20 points, with 5 3-pointers. The big man Jordan Armstrong, although did not score, recorded 7 huge blocks to accompany his double-digit rebounds.
Now winners of 16 straight games, Analy hits the road for the semi-finals, where they will travel to Moraga Wednesday night to take on #2 seeded Campolindo.
Share
Copyright (c) 2016 Splash.
Theme by StylemixThemes.