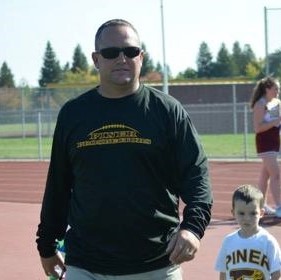 It was 2011 when John Antonio took over the Piner football program. It is such a different world now. Piner was in the North Bay League back then, now they are in the Sonoma County League. The biggest difference for Piner is the program itself.
Antonio announced his resignation on Friday. He met with players; both current and former to let them know after telling school officials earlier.
This wasn’t an easy decision for him. But it all came down to the same reason that people usually step away from a job like this and that is family. The 38 year old has a four and nine year old son and he is missing them grow up. He has missed Little League games, birthdays, anniversaries and other family events. A high school football coach’s life isn’t easy and is time consuming. Add to it he lives in Novato, which adds to the commute, which adds to more time away from family. Coaching football was a passion to him, but in the end the passion of watching his kids grow comes first, as it should be.

As a parent the goal is to leave your kids with a better life than you had. If the Piner football program is considered his kid, Antonio succeeded.
When he took over the program it was a mess. The seven seasons before Antonio took over, Piner had a combined nine wins. In 2010, the year before Antonio showed up, they went 1-9. They lost by scores like 75-0 and they were outscored by an average of 50-20. There was a four week stretch in which the closest game was 41-6. Things looked hopeless.
The turnaround didn’t happen overnight. It was more of the same in 2012, at least record wise as they went 2-8. But the losses had a different feel to them. Four of the six losses were by 15 points or less and two of those were by scores of 30-27 and 13-12. After winning the opener, they lost a heartbreaker to Drake 30-27, a game they led 27-16 with five minutes left. In the YSN365.com recap of the game the first sentence said. “This isn’t the Piner team that you might remember from recent years. “
They ended the season 4-6 and were eligible for the NCS playoffs, but weren’t chosen. That would come the next season when they went 5-5, with most of the losses being close games. There were two one point losses and two other nine point losses.
This time they made the playoffs as a No. 9 seed. Then came what Antonio calls his favorite moment which was a playoff win. They went on the road to defeat St. Patrick-St. Vincent 43-29. It was Piner’s first playoff win in a decade. WATCH THE VIDEO
The last two seasons featured two more playoff appearances. Piner’s problem now was not the one sided losses, but the close ones. An example of that was this year’s 29-22 loss to Petaluma. Piner was behind 21-7 in the first half and rallied to take a 22-21 lead in the fourth quarter. This is the same Petaluma team that missed by a Hail Mary pass of getting the SCL championship game against Analy into overtime.
When Antonio talks about the program he says, “We” and not me. The “we” is the administration, the coaching staff and the kids, not necessarily in the order.
When I started writing with YSN365.com, Piner wasn’t given much notice. There was only so much you could say about the one sided losses. Watching them grow into team was one of the nice developments over the last five years. One of the moments I regret in being part of the KSRO game of the week package is we weren’t there to see the playoff win. NCS playoff games happen every season. That one was special.
Antonio is proud of his time at Piner and he should be. When he first started, teams were worried about playing Piner, not because they were worried about winning, but keeping the score down. As he leaves they were worried about playing them for a different reason.
My email address is jacpasquini@comcast.net