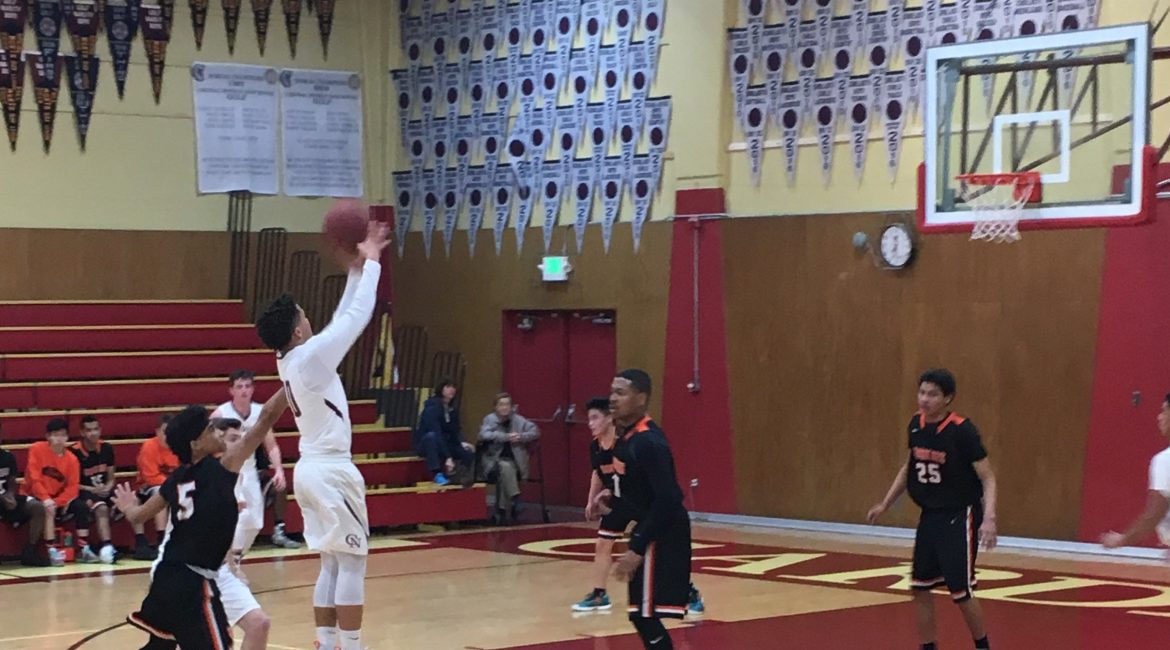 by Dale Watkins
The opening round of NCS Division 2 playoffs beholded #3 seed Cardinal Newman taking care of business as they had all regular season, coasting by a scrappy #14 seeded Washington (Fremont) Husky squad in a 69-56 win Tuesday night.


Cardinal sharpshooter Cody Baker had his own personal 3-point duel with the entire Husky team in the first quarter; both parties coming out firing and trading threes for several opening minutes. The Huskies had no trouble breaking the Newman press and finding open shooters for threes, however. Amid a 3-pointer each from Damian Wallace and Brad Morato, Washington surprisingly led at the end of one, 16-15.
The Huskies’ Isaiah Washington picked Damian Wallace’s pocket clean, and took it the other way for a tough layup, plus the foul; nice play to get the Husky crowd on their feet. But Wallace’s 3-ball off the screen, as well as a beautiful pass on the fast break to Jalen Dural, would give the Cardinals a 35-28 halftime lead. Cody Baker was feeling it in the 2nd quarter, knocking down three more 3’s in the period.
Two Cardinal buckets opened the second half, courtesy of Nathan Capurro down low going up strong for 2, and Baker coming off the pindown screen for an easy midrange J. Washington’s first second-half basket didn’t come until 4 minutes in, when Jaylen Edmonds tipped in his own miss. The Cardinals easily dismantled the Husky press, finding Brad Morato for a 3 in the corner, as well as Damian Wallace dribbling past everybody, going coast-to-coast for the acrobatic lay-in. It was a comfortable 51-35 Cardinal advantage at that point.
But the Huskies found a groove late in the 3rd, ending the period on a 7-0 run. The quarter ended with an incredible chasedown block by Chauncey Leberthon, coming from behind the play to pin the Husky layup attempt off the glass as the buzzer sounded. 53-42 Newman after 3.
The Cardinals’ Bennett Kohut started the 4th knocking down a three of his own; Cody Baker doing the same on the next possession. Nathan Capurro and Jalen Dural were both beasts on the glass all night, getting their team extra shots and frequently limiting Washington to one-and-done on the offensive end. Newman had no problem handling the Huskies’ press and traps in the 4th. Taking care of the ball and some “safety” baskets late stymied any hope for a Washington comeback, as the Cardinals rode the wave to a 69-56 final.
Cardinal Newman shot 40% from the field and forced 13 total Husky turnovers, compared to a 37% field goal percentage from the Huskies, who also forced 13 turnovers from the Cardinals. Cody Baker led all scorers with 26 points, including hitting 8 of 14 on threes on the night. Damian Wallace followed with 11 points and 5 assists. Jaylen Edmonds led the Huskies with 21 points.
The Cardinals now advance to the NCS quarterfinals, where they will battle #6 seeded Tamalpais at home Friday night at 7pm.
Share
Copyright (c) 2016 Splash.
Theme by StylemixThemes.