BASEBALL: BATTLE IN THE SCL TO THE END 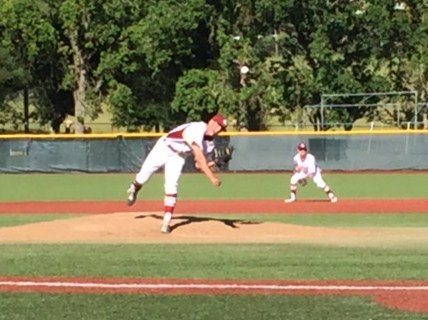 Going into its Tuesday showdown game with Petaluma, Sonoma Valley the No. 2 team in the latest YSN365.com rankings, had given up two runs in its first eight league games and committed one error.  They also hadn’t given up a run in four games and thirty innings. All that was undone in one dreadful inning and now the SCL race is a dogfight, after No. 5 Petaluma takes a 7-2 win.

The dreadful inning was the second, when Sonoma Valley committed two errors, one which started the inning and the other which threw gas on it.  Tyler Williams made the errors hurt by hitting a two out-two run double to finish off a five run inning.

As good as Sonoma Valley’s pitching has been, Petaluma hasn’t been too far behind.  They went into the game with a six game winning streak and the most runs they had given up during the streak were three.  So the five run second was enough.  Hunter Williams went six innings and gave up one earned run to get the win.  Luke Wheless finished off the last inning.

At 9-1, Petaluma is in sole possession of first place in the SCL race.  That is because they have played one more game than Sonoma Valley, who is 8-1.  Both teams play on Friday and schedule advantage belongs to Petaluma, who has a home game with Elsie Allen, who is winless in league play.  Sonoma Valley hosts Piner, who is battling Analy for the last spot in the SCL post season tournament.

Petaluma ends its league season next Tuesday at El Molino, who is in third place in the league race.  Next week Sonoma Valley goes to Healdsburg, before wrapping up the league season with a home game with El Molino next Friday.

OTHER BASEBALL NOTES
Cardinal Newman was one out away from being eliminated from the North Bay League baseball race.  But without a hit, a three run seventh gave them a 5-3 win over Ukiah.  The winning rally was set up by two errors and an intentional walk, which loaded the bases with two outs.  Two more walks and a fielder’s choice scored the three runs.  Cardinal Newman won the game despite only getting three hits and committing six errors.

Casa Grande kept first place with a 10-0 win over Santa Rosa.  After their long shutout streak came to an end in a win over Ukiah last Friday, they did one better by getting a no-hitter.  The gem was thrown by Eric Parnow, who struck out nine and walked one.  It was his fourth start of the season and raised his record to 3-0.

Casa Grande has won eleven straight and is 14-3 on the season.

Sonoma Academy went eight innings to defeat St. Vincent 3-2 in a game between the two undefeated teams, tied for first in the NCL II race.  It was the first time in school history that Sonoma Academy defeated St. Vincent.

Ethan Jones drove in the winning run in the eighth.  He also pitched the last two innings to get the win, and raise his record to 3-0.  Junior Dylan La Montanya went the first six innings for Sonoma Academy and gave up one earned run, four hits and struck out eight. De La Montanya has struck out 101 in fifty six innings.

Rincon Valley Christian is 6-2 and plays both teams.

My email address is jacapsquini@comcast.net