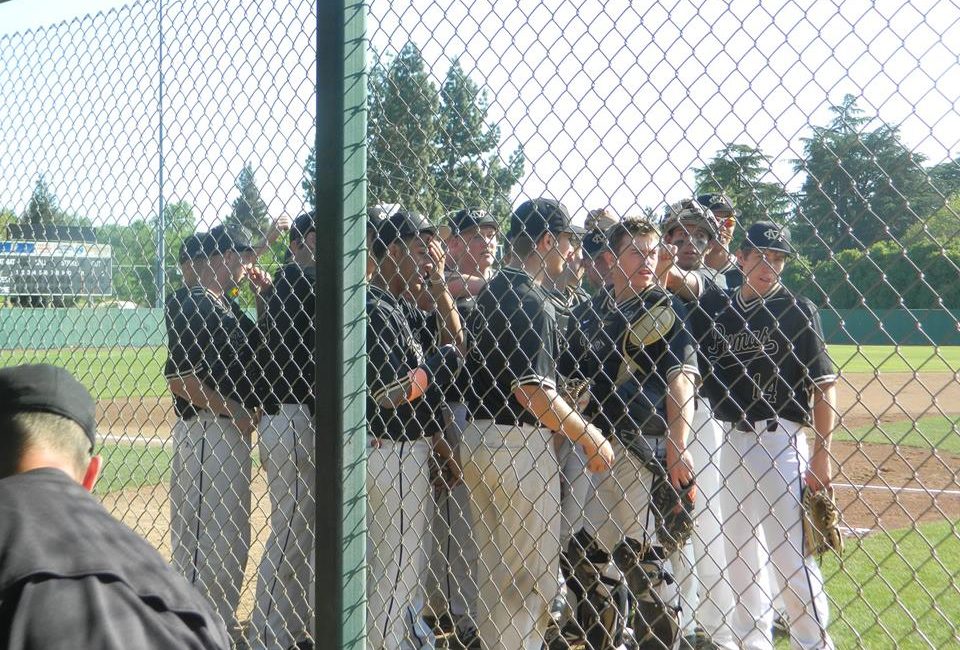 
Up to now they have played that role very well.
It doesn’t appear that they need it, but the Pumas did get some help on Friday.  The help coming from Ukiah, who rallied with a six run seventh to defeat Cardinal Newman 8-3.
At the same time, Maria Carrillo was taking care of business with a 5-0 win over Montgomery.
At 4-0, Maria Carrillo is the only undefeated team left in the North Bay League race.  Cardinal Newman, Casa Grande and Ukiah are 3-1
It appeared most of the way that Cardinal Newman would keep pace with Maria Carrillo.  Behind the pitching of Cal Clamer, they carried a 3-0 lead into the sixth inning.  Through the fifth, Clamer had given up one hit and at one point retired seven in a row.  But he didn’t survive the sixth, as Ukiah scored two runs to cut the lead to one.
Still, after the first two made outs in the seventh, Cardinal Newman was one out away. On several pitches they were one strike away.  Over the next three batters, there were ten pitches thrown that the Ukiah batter had two strikes.  The pitches were either fouled off or a ball and all three batters walked.  The second batter of that streak, Robbie McIntosh fell behind 1-2 before walking in a nine pitch at bat.  Next came another walk to AJ Griffen, which only took five pitches that tied the game at 3-3.  That was followed by a single by Joey Brazil which gave Ukiah the lead.  Next came a hits batsman, a passed ball and two base hits.  When it was done seven straight batters reached base and Ukiah had the unlikely 8-3 win.
This was the same Ukiah team, who overall is 9-5 on the season, that on Wednesday dropped an 18-2 decision to Casa Grande.
Meanwhile, Jared Brazis pitched a complete game three hitter to lead Maria Carrillo to the 5-0 win over Montgomery. Brazis struck out ten and walked three.  He ended the game with a flourish, striking out the side, with the last two on called third strikes.
It turned out that Maria Carrillo had enough to raise its overall record to 11-2, when they sent nine batters to the plate in the first inning and scored three runs.  Jo Bynum added some insurance in the fifth with a two run homer.
Casa Grande, whose only league loss is to Maria Carrillo, kept pace with a 6-2 victory over Santa Rosa.  Sophomore Chris Joaquim pitched a complete game to raise his record to 3-2.
Ukiah will get another chance to shake up the NBL race when they host Maria Carrillo next Wednesday.
SONOMA VALLEY OUTDUELS PETALUMA
Going into Friday night, Petaluma and Sonoma Valley were two of three teams undefeated in the Sonoma County League baseball race.  The two teams met and it a classic pitching duel, with Sonoma Valley taking a 2-1 win with the two teams combining for three runs and six hits.
Each team scored a run in the first and it was zeros after that except in the third when Sonoma Valley scored a run without a hit.  MacLean Meyn pitched a complete game, striking out seven.  He has won his last two decisions to raise his record to 4-3.
The result, combined with Piner’s 5-3 win over El Molino, leaves Sonoma Valley as the only undefeated team left in the SCL race at 3-0.  El Molino, Petaluma and Piner each have one loss.
My email address is jacpasquini@comcast.net
Share