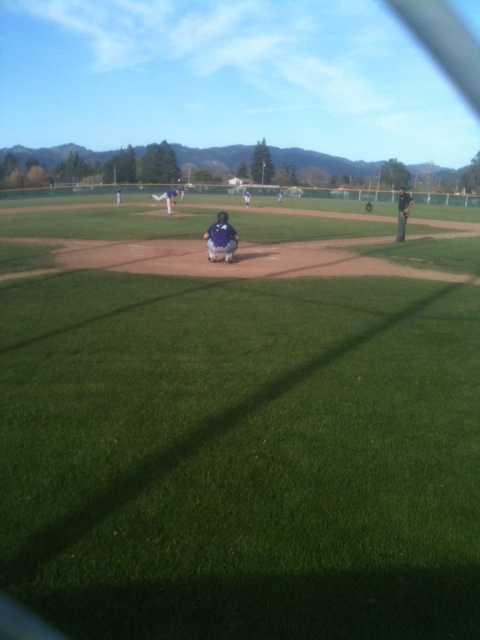 Analy and Petaluma finished first and second in the 2013 Sonoma County League Baseball race, with the Tigers taking the title, going through the league race undefeated.

The two teams got a pre-league look at each other in the championship game of the 20th Annual Rabinovitz Tournament, which is hosted by Montgomery High School and was won by Analy last year.

Score one for Petaluma, as they got some big time relief pitching, an outstanding defensive play and some luck in a 6-1 win.

Analy starting pitcher Evan Hill, who overall had a good outing, would like the first inning back especially the first two batters.   Frustrated by a small strike zone, he walked the first two batters he faced.   It looked like he got a break when Austin Gabbert, who would be named the Outstanding Hitter in the tournament, tried to move the runners along with a bunt and popped one up to the mound for the first out.    Gabbert would make up for that in the bottom of the inning and Hill wouldn’t get out of the inning scoreless.    That is because Austin Thomason came through with an RBI single and after another run scored on a wild pitch, Petaluma had a quick 2-0 lead.

In the bottom of the inning it looked like Analy would come right back, as they started the inning the same way Petaluma with two walks.    Petaluma Manager Paul Cochrun didn’t fool around bringing in Cameron Myers into pitch.   Myers was greeted by Jacob Royer, who hit a line shot to right field that look like it would fuel a rally to get Analy right back even.   But Gabbert charged in and made a diving catch, which led to a rally killing double play.

Petaluma would get a big break to double the lead in the second.   With two outs and two on Myer lifted a routine fly to right field that was lost in the sun.   By the time the ball was retrieved, it was a two run triple for Myers and a 4-0 lead for Petaluma.

Analy had a couple other good chances to get back in the game.

In the third, they had runners at first and second with no outs, but they ran themselves out of the inning when the lead runner was thrown out trying to steal third.  It took just two pitches by Myer to get the last two outs of the inning after that.

In the fourth, Analy broke through on an RBI single by Grant St. Martin to make it 4-1.  Cochrun changed pitchers again and it worked again.   Greg Thomas came in and struck out two to end the inning, which not only kept the Petaluma 4-1 lead, but started a solid relief performance in which he would finish things off, to get his first save going 3 2/3, striking out five, walking one and gave up one hit, a hit that went about ten feet in front of the plate.  In 8 1/3 innings this season, Thomas has given up one earned run.

Analy had just avoided falling into a deeper hole in the top of the inning.   With runners at first and second with no outs, St. Martin came in to get a strikeout and a double play to get out of the inning.

Petaluma finally got some insurance in the seventh, thanks to an RBI triple by Luke Wheless, who then scored on a sacrifice fly.

Petaluma finished outscoring tourney opponents 25-4, to win the tournament and raise its season record to 7-3.

Analy had a four game losing streak snapped and drops to 5-4.

Next Tuesday, league play starts in the Sonoma County League.  One of the games is Petaluma at Analy.

In the third place game, Windsor jumped out to an 11-2 lead in the third on its way to a 13-7 win over host Montgomery.   Windsor is now 7-1 on the season, the lone loss was in the second round of this tournament to Analy 6-4.

The consolation trophy went to the other out of the area team in the tournament, which was Chico, who defeated Ukiah 9-1.   The seventh place game went to Piner who defeated Santa Rosa 11-4.

El Molino has started the season 8-1 after winning three straight in its own tournament.    The eight wins are as many as they won all last year.    The Lions have given up a average of a little over two runs a game.   They host Cloverdale on Saturday before opening SCL play at Healdsburg on Tuesday.

Thursday was Day One of the Westcott Memorial Tournament at Casa Grande.   It was a tough day for Sonoma Valley, who after making rallies in the two games it played, lost both with the winning run scoring in the seventh inning or later in both games.

In the third game of the day, all the runs and both of Cardinal Newman’s hits were in the first inning in a 4-2 win over Healdsburg.

Casa Grande makes its first appearance today, putting its 6-0 record on the line when they meet Healdsburg at 10 am.    That is the first of two games they will play.   The second will be a NBL preview with Cardinal Newman.   Casa Grande, who is the tournament defending champion, went 13-1 in NBL last season.   The only loss was to Cardinal Newman.

There is one other game between Maria Carrillo and Eureka.   This is a round robin tournament format with three games on Saturday.  The championship game is at 4 pm.