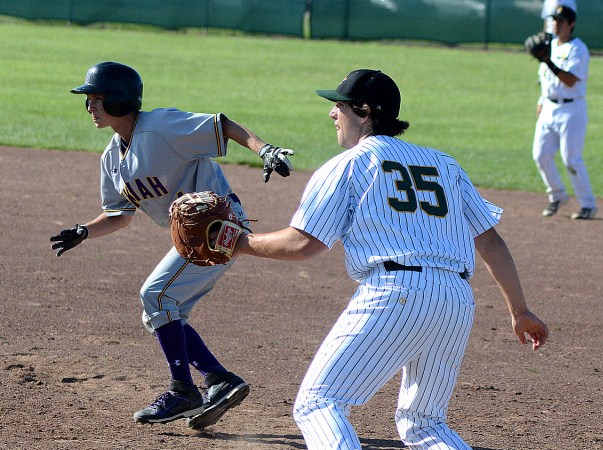 Another team that YSN and power rankings agree on is Clear Lake.  That isn’t where they are, but what to make of them and its 20-0 record.  They keep winning, but for the second straight week, Clear Lake dropped in the power rankings.
No. 1 (Last Week No. 1) Casa Grande (15-5)…Yes they gave up a run.  Still have a ten game winning streak and the lead in the NBL race.
No. 2 (2) Sonoma Valley (11-8)…Their turn to have the shutout streak with four straight.  Overall they have won eight straight and have given up four runs in eight league games and committed two errors.
No. 3 (3) Cardinal Newman (16-4)…Pulled out a two win week to keep pace with Casa Grande.  Have two road games this week.
No. 4 (4) Maria Carrillo (15-5)…Bounced back from three loss week, by going 2-0.  The six runs they scored against Windsor, was more than they scored in the four previous games combined.
No. 5 (5) Petaluma (14-7)…The Trojans have a six game winning streak and have scored in double figures in five of the games. In those six games, they have given up a combined 10 runs.
No. 6 (6) Clear Lake (20-0)… The NCL I is better than the way the Cardinals are treating them.  They are 10-0 and the average score is 10-2.  Four games away from an undefeated regular season.
No. 7 (7) St. Vincent (15-3)…The NCL II is a two team race and those two teams finally meet.
No. 8 (8) Sonoma Academy (12-2)…The NCL II is a two team race and those two teams finally meet.
No. 9 (9) El Molino (13-7)…They are 5-3 in league play.  Meet two of the teams they have league losses to this week.
No. 10 (10) Analy (11-10)…After scoring ten runs in three straight games, got shutout twice against the SCL top two teams.
POWER RANKINGS
No. 1 (Last week No. 2) Casa Grande
No. 2 (1) Maria Carrillo
No. 3 (4) Cardinal Newman
No. 4 (3) Clear Lake
No. 5 (5) Petaluma
No. 6 (6) Sonoma Valley
No. 7 (7) Ukiah
No. 8 (8) Analy
No. 9 (9) St. Vincent
No. 10 (10) El Molino
THIS WEEK HEADLINES
NORTH BAY LEAGUE
This is like the calm before the storm.  Four games left and Casa Grande has a one game lead over Cardinal Newman and Maria Carrillo.  Cardinal Newman meets the other two the last week of the regular season.
Ukiah, who is three back, is in the eye of the storm this week. On Wednesday, they host Cardinal Newman and Friday go to Maria Carrillo.
Ukiah has a two game lead over Rancho Cotate and has the tie-breaker advantage for the final NBL post season spot.
SONOMA COUNTY LEAGUE
The league race is between two teams and they meet on Tuesday, when Sonoma Valley travels to Petaluma.  Petaluma’s only league loss is to Sonoma Valley 2-1.
While those two battle for first place, there is also a battle going on for the final spot in the post season tournament. Piner has a half game lead over Analy for the final spot and both teams meet El Molino this week.  The Lions are in third place, one game ahead of Piner.
NCL I
Clear Lake is four games away from a undefeated regular season.  Three of the four games are against teams that are over .500 in NCL I play including two against Middletown.
NCL II
Tuesday is showdown day.  Sonoma Academy travels to St. Vincent, which is the first of two games between the two teams.
My email address is jacpasquini@comcast.net