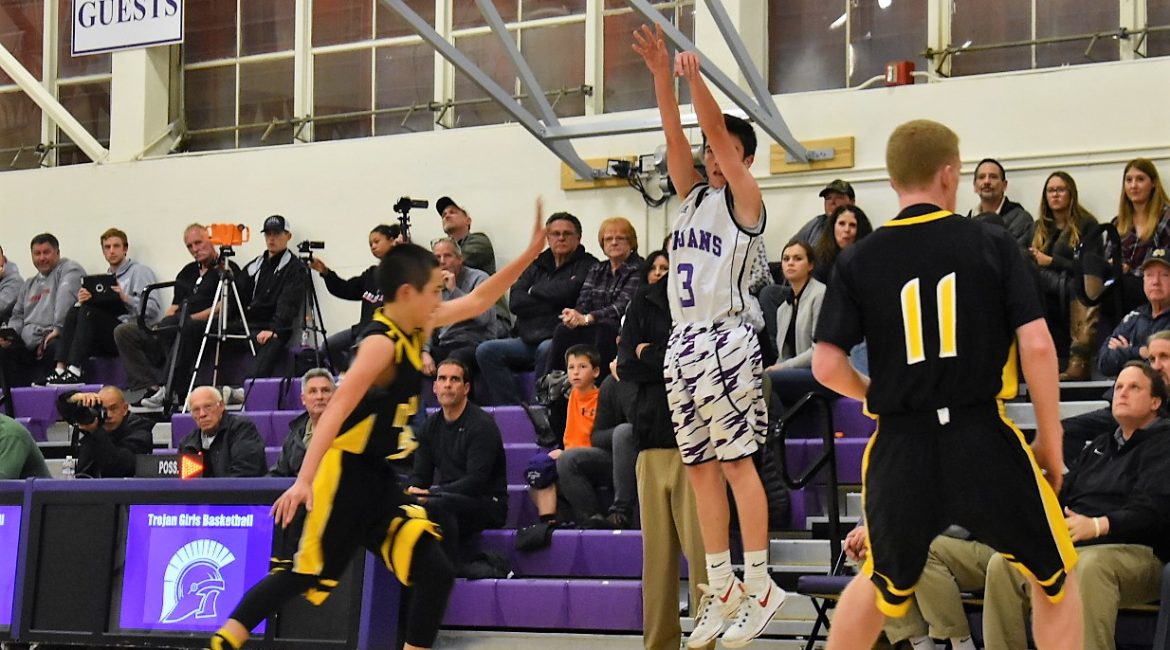 As the new year begins, so does league play in high school basketball. The Sonoma County League kicks off with games beginning on Tuesday, followed by the beginning of the North Bay League on Wednesday.


Last year, the SCL regular season championship was won by Analy, and the SCL Tournament Championship was won by surprising Petaluma. The champion of the league could come from four different teams this year. Analy, Petaluma, Piner, and Healdsburg all have a chance to win the league title. The SCL Tournament championship will again be played at SRJC’s Hael Pavillion on either February 24th or 25th.
Analy, the defending champion, has Aidan Toner-Rogers for a full season and he has been producing, most notably scoring 21 points in the Windsor Shootout vs Albany. They also have three point shooter Dom Tripodi back, and lets not forget 6’8” center Jordan Armstrong. Look for Analy to be at the top of the league, and back in the SCL Tournament championship.
Petaluma brings back their 6’8” center Joey Potts and forward Collin Stremlau. Brendan O’Neil has been a force to be reckoned with defensively for the Trojans, coming up with a lot of steals. Second year coach Scott Behrs will have the Trojans ready for an exciting SCL run. Petaluma should be Analy’s biggest threat for a league title, and will probably be in the SCL Tournament Final.
Piner has their sophomore point guard Scott Erickson to lead the Prospectors. He and Andres Barragan will have to help keep Piner up against a good SCL field.
Healdsburg is much improved, starting 10-2 on the year. Landon Courtman and Juan Aguilar will lead the Hounds as they have a day one league showdown with Petaluma, Tuesday at 6pm in their home gym.
Sonoma Valley, El Molino and Elsie Allen round out the league. These teams will have trouble competing with the speed and size with teams like Analy and Petaluma.

The NBL should be a four team race this year, unlike last. Cardinal Newman, Montgomery, Santa Rosa, and Windsor are all contenders for the title.
Cardinal Newman, with Cody Baker and Damian Wallace have the shooting to make a deep run. Steven Zichichi will be the might and muscle inside the paint for the Cardinals.
Windsor’s twin towers, Riley and Justin Smith leading the charge for the Jags. They provide dominant rim protection to stop the driving abilities of a Damian Wallace, and Kalei Aukai (Santa Rosa).
The aforementioned Aukai will help bring Santa Rosa back into the NBL race again this year. Under new head coach, Rich Clark, they have started 7-4 on the year.
Montgomery has already beaten Cardinal Newman in the Brett Callan Tournament this year. Evan Poulsen provides the reliable outside shooting. Riley O’Neil will be down low for the Vikings.
Share
Copyright (c) 2016 Splash.
Theme by StylemixThemes.