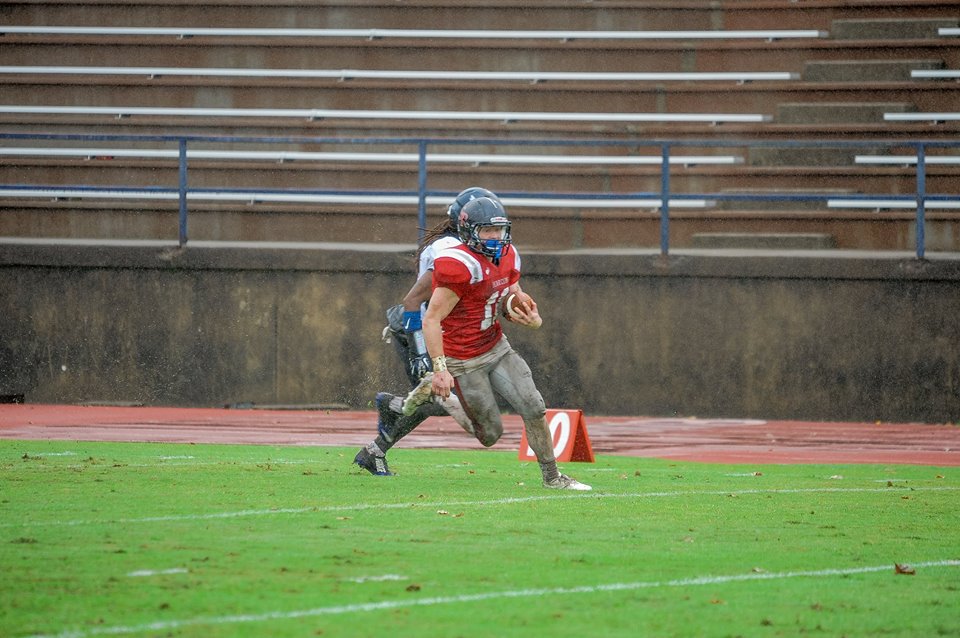 Bailey Field welcomed a battle in the swamps on a rainy Saturday, which were oddly familiar playing conditions for the Bear Cubs this season. The field itself looked far more brown than green. But the Bear Cubs persevered to an easy 17-7 win over the Siskiyous Eagles in the annual Gridiron Classic Bowl.
Ben Putman took a short pass from Mitch Hood, adeptly maneuvered his way behind blocking, and cut back in to make a defender slip, finding the endzone for a 25-yard score. After Siskiyous converted on 4th down to keep the drive alive, they would work a little razzle-dazzle on the first play of the 2nd quarter. QB Jacob McCormick took the snap and pitched it Grant Kingston, who tossed it to Ryan Blythe on the end-around, fooling everyone as Blythe outran the defense to the corner to make it 7-7.
When Santa Rosa was threatening at the goal-line, Hood tried to hand it to Ja’Narrick James but they had trouble on the exchange. They essentially ran it in together from one yard out with both of their hands on the ball, to make it 14-7 with 1:51 left in the first half. The Eagles missed a golden opportunity to score at the end of the half, when McCormick was sacked by the facemask by Jerry Gainey; that penalty granting them an untimed down. But they elected to try for a touchdown over a sure field goal, and came up empty.

Zach Smith began to reel off hefty chunks of yardage down the field to get them within scoring range, as Andros Pedroza drilled a 20-yard field goal despite the muddy mess, to extend the lead. From then on, both teams went back-and-forth exchanging punts. The Eagles were held scoreless in the 2nd half by a reckless Bear Cub defense, led by Miles Gardea and Andrew Togiailua. Grant Kingston slipped and fell on a critical 4th-and-1 late to turn it over and put this one in the books.
SRJC accumulated 385 yards of total offense to outdo the Eagles’ 167. Mitch Hood would struggle in his Bear Cubs finale, throwing for 119 yards on just 9 of 29 completions, along with four interceptions. The Gridiron Classic MVP was awarded to Zach Smith, who erupted for 201 yards rushing on 21 carries. Ben Putman caught four balls for 76 yards, while Keilan Benjamin had two interceptions in the secondary. Jacob McCormick paced the Eagles with 69 yards threw the air, and 66 on the ground.
The Bear Cubs finish the season at 9-2, as head coach Lenny Wagner welcomed a Gatorade bath by his players to celebrate a phenomenal year with many highlight moments.