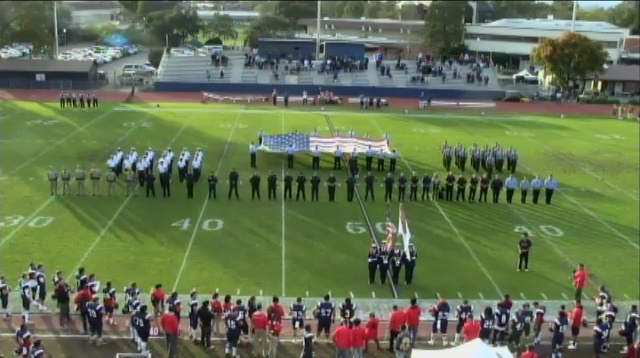 A win over the visiting San Mateo Bulldogs and SRJC would hold a 3-way tie atop the Bay 6 Conference standings, but a late field goal would turn out to be the difference in a 26-23 Bulldogs win that came down to the wire.


Ben Putman took the opening kickoff and returned it 59 yards all the way back to the Bulldog 35-yard line. After kicker Andros Pedroza quickly put the Bear Cubs on the board first, San Mateo would drive 80 yards down the field in just three plays, as star running back Keenan Smith scored on an 8-yard TD run to take the lead 7-3.
Putman then found the endzone on back-to-back drives late in the first quarter. The second of those touchdowns would be a perfectly-executed screen pass from Mitch Hood to Putman as he would turn, make one man miss, and then turn on the blenders, racing away from the Bulldog secondary for a 46-yard score. The Bulldogs’ Kava Mata stymied another potential touchdown by diving in front of the open receiver and batting the ball down, a tremendous display of athleticism. Santa Rosa would have to settle for another Pedroza 30-yard field goal, pushing the lead to 20-7 with 11:14 left in the 2nd quarter.
Presley Piliati, one of the defensive anchors and heartbeat of the Bear Cub defense, would get critically injured making a tackle and have to be carried off on a stretcher. Fans in the stadium sat dead-silent in utter shock before play would resume following an emotional 30-minute delay.

A Santa Rosa pass interference penalty on 3rd down bailed out the sputtering Bulldog offense as they moved inside the redzone, while Ramiah Marshall proceeded to receive a pass and dash 15 yards in for the score. The extra point was no good. Later in the quarter, Ja’Narrick James became indecisive on whether to field a punt or let it bounce, but the ball ricocheted off him before he could decide, as Dorzell Hicks recovered the fumble inside the 10-yard line for San Mateo. A Cesar Silva field goal cut into the lead even further, now 20-16 Bearcubs as time ran out in the first half.
Both offenses would stall in a 3rd quarter of no scoring, while a defensive skirmish began to take center-stage. The always-reliable Andros Pedroza nailed a 27-yarder to begin a nail-biter of a 4th period, extending the lead to 23-16. San Mateo would respond with an impressive subsequent drive. Their quarterback Bobby Calmeyn ran play-action and connected downfield with Line Latu, who beat his man on coverage and stumbled in for the game-tying score with 11:10 remaining.
A crucial Santa Rosa offsides penalty on 4th and short gave the Bulldogs a fresh set of downs with under three to play. Tasi Teu picked up a huge 46-yard gain after breaking a tackle and finally being brought down at the 2 by Jaise Griffey. A valiant goal-line stand led by Miles Gardea forced San Mateo into a field goal try, as Cesar Silva split the uprights with 1:05 to go. It was now 26-23 with the Bulldogs in front, capping off a 19-3 scoring surge after being down 20-7 early.
Mitch Hood would leave the game with an undisclosed injury, handing the reins to Tyler Okiyama to lead the game-tying or winning drive. With no timeouts left, Okiyama got his chance. However, he would lose his footing and fall down, and then get sacked on 4th down looking for an open receiver, turning the ball over on downs and essentially ending the game. Not quite the ending the Bear Cubs had fought all game for.
Mitch Hood would complete 31 of 52 pass attempts for 341 total yards, two touchdowns and two interceptions in the losing effort. Ben Putman and Kerr Johnson Jr. manned the receiving core; Putman catching 10 passes for 129 yards, Johnson with 9 catches for 125. On the other side, Robby Calmeyn would throw for 249 yards completing  26 of 40 passes.  Keenan Smith was a trail-blazer on the ground, rushing 26 times for 128 yards.
The Bear Cubs are still 7-2 overall, but now 2-2 in conference play. They will travel to De Anza College next Saturday looking to finish off the regular season on a high note.