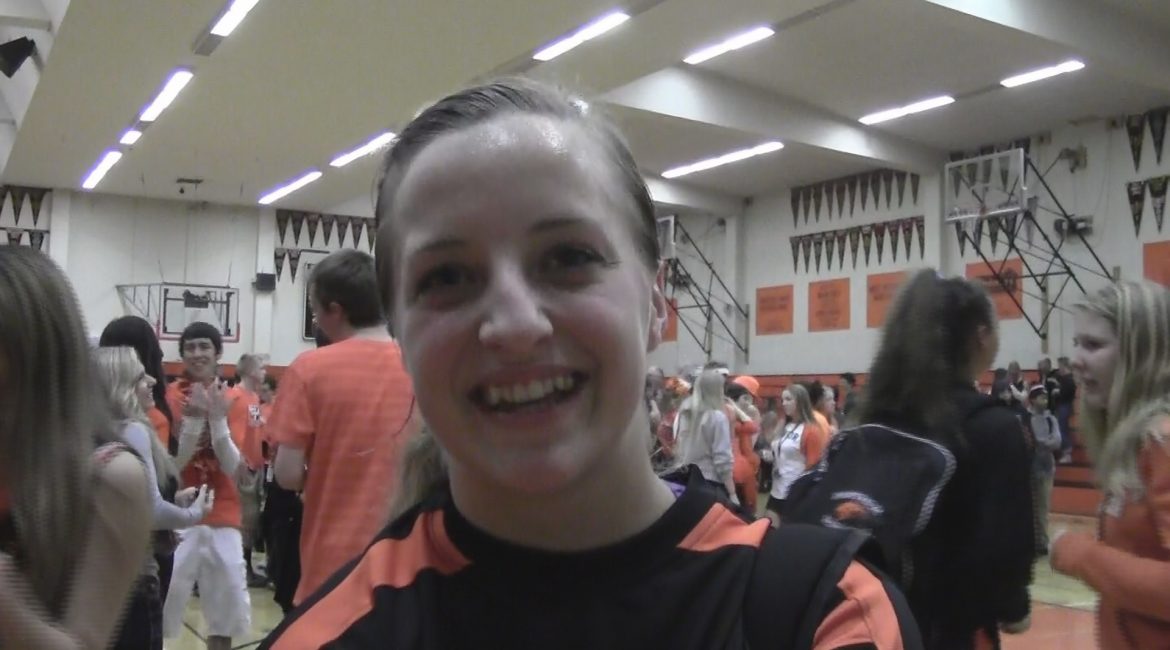 There was a story that overshadowed the battle for first place in the NBL Girls race between  Cardinal Newman and Santa Rosa.  The overriding story was about the people at the game and how they kept coming and coming and coming for what is being called the biggest Girls regular season crowd in school history.   The student section’s from each school came out in force.   The people kept coming until the Gym at Santa Rosa High School was filled and it couldn’t fit much more in.

What the people saw Friday night was pretty much  what was known, Santa Rosa has a pretty good basketball team.   What they also found out is a young Cardinal Newman Cardinals team isn’t too bad themselves.

Santa Rosa defeated Cardinal Newman 57-41 in a game that that was between two undefeated teams as the NBL League race reaches the halfway point.   They will also be the No. 1 and No. 2 teams in the next YSN365.com Girls Rankings.

It didn’t take long for Santa Rosa to show off to the big crowd.   A smothering defense made it hard for Cardinal Newman to get the ball into the front court, let alone score.   The Cardinals offense in the first quarter was two free throws.  Santa Rosa had that :30 second into the game when Morgan Bertsch hit a pair to start the scoring.

The Student Section for Santa Rosa did what is called a Silent Night.  That is the crowd standing like zombies and making no noise until the team they are rooting for scores 10 points.   The game was not quite three minutes before the student section erupted when Devin Murray hit the first of two free throws.   Cardinal Newman’s student section had been cheering from the start and at the moment the Panthers student section started their cheering, they had more scoring to cheer for than the Cardinal section.  When Murray hit her second free throw it gave Santa Rosa an 11-0 lead and the Panthers team was looking as good as advertised.  Murray scored six of the eleven and had 14 first half points on her way to a game high 19.

The game had the looks, as so many Santa Rosa games have had this season, of a runaway train dressed like a Panther.

That is when the young Cardinals team took some big steps in the maturing process.   A lot of teams would have and have been buried by the avalanche.  Cardinal Newman went in the other direction.

First what they did was slow down the offensive outfit as Santa Rosa scored two field goals the rest of the quarter.   Unfortunately for Cardinal Newman, that was two more field goals than they scored.   They did hit two free throws and it was a  15-2 Santa Rosa lead after one.

Two three point shots by Kylie Kiech to start the second quarter were the team’s first field goals of the game and started the path of them getting back into the game.   It was a long path as Santa Rosa didn’t let up.   Devin Murray scored eight of her game high 19 points to help keep a 26-13 lead with two minutes to go in the half.

Cardinal Newman then made its big move.  A 9-2 run to end the first half cut the lead to 28-22 and they cut the lead to three a couple of times in the third quarter.   The last time was 36-33 with five minutes to go in the quarter.   It looked like the big crowd was going to be treated to an exciting finish.

What they were treated to instead was Santa Rosa again showing what they are, a special team.  Being pushed as hard as they had been all league season, they responded in a big way.   Over the next eight minutes, Santa Rosa put on a 20-2 streak to put things away.

Everything was on display during the run except the three point shot, which they could never get going only hitting one on the night.  There was Morgan Bertsch who scored six during the 10-0 streak that started the run.   Bertsch ended up 14 points and also had 16 rebounds, five of them during the start of the run.

If it wasn’t here it was Katie Daly running the show. She hit Santa Rosa’s only three of the night and scored 12 points.  But where she comes into play is her complete game.   Her quick hands caused seven steals and she dished out six assists.   It seemed like she had double figures of both.

Another thing that gets overlooked is the team can play defense.  The defense led by Bertsch, bottled up Cardinal Newman’s leading scorer Tiffany Salinas, who is a sophomore and did score 15 points, seven of those in the three minute span at the start of the third quarter.

As for the big crowd, it caught some by surprised which means that they didn’t read the YSN preview of the game which said, among other things, “If you are going to the game, don’t treat it like a regular girl’s game.   Both these teams have a pretty good following and they played to a near full house last season when the game was at Santa Rosa.”

There were several comments on the size of the crowd as people had a hard time getting from one seat to another.   Toward the ending of halftime there was an announcement that the snack bar needed volunteers to help with the long line.

What this showed is how far girls’ sports have come.   To get a crowd like that for a girl’s game would have been unthinkable not too long ago.  The Santa Rosa fan base has developed a reputation for coming out to see it’s Girls play.   They came out in mass for last year’s Cardinal Newman game which was the last NBL league game of the season and they were there at SRJC for the NBL post season championship game.

Cardinal Newman drops to 13-6 and showed enough to give the idea that the best is yet to come.

But this night, much like the season, belonged to Santa Rosa and the fans who came out to see it.

By the way, these two teams will meet again at Cardinal Newman on February 13th, which will be the last game of the league race.

Watch Video Highlights of this game

According to reports there was another full house for the game at Analy with Sonoma Valley, which was between the last two undefeated teams in the SCL Girls race.   Analy pulled away in the fourth quarter to win a defensive battle 42-28.

Analy had a 28-24 lead going into the final quarter.

Jessie Davidson led Analy with 11 points.  Sonoma Valley’s Delaney Swanson was the game leading scorer with 12.  The Dragons played their second game without leading scorer Mackenzie Albrecht, who was out with an injury.

There were two other games scheduled in the NCL Girls World involving first and second place teams.  One, the game between No. 9 Roseland University Prep at No. 7 St. Vincent has been moved to Monday.

In the other, the first place team won easily.  No. 8 Cloverdale defeated St. Helena 62-44.  A 21-6 second quarter gave Cloverdale control they never lost.  Amy Mora scored 15 points, which was one of four Eagles in double figures.

SHE DID IT AGAIN

SRJC Gretchan Harrigan has led the state in scoring most of the season.  This week she fell to second.   Maybe she took that personally.  Harrigan scored a season high 51 points in a 94-87 win over Diablo Valley.   That adds to her game of 41 and four others in the 30’s.   Her scoring average is now 26.5 a game and she went from .3 down to 1.3 ahead in the state scoring race.

The win puts SRJC at 14-7 and 6-0 in league play and they keeps its one game lead over Sierra in the Big 8 race.

The news wasn’t as good for the Men as they dropped their second in three games, to Diablo Valley 62-52.    At 4-2 SRJC is in a second place tie two games behind Cosumnes River.  The Bear Cubs can get right back in the thick of things when they travel to Cosumnes River on Tuesday.