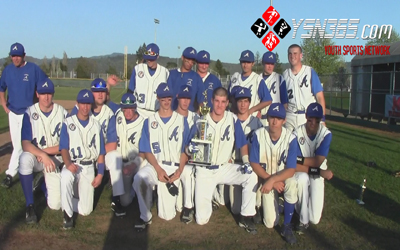 In what has been the year of the one run game, five of the nine NCS Baseball and Softball games which involved the local teams on Saturday were  one run games.

Some worked out, others not so much.

The big winners of the one run game were local Division 3 Baseball Teams.  Both Analy and Sonoma Valley pulled it off and move to the semi-final.

Both teams went into the sixth inning trailing and still pulled it off.

Against Alhambra, Analy trailed 2-1 and scored the winning run on an unlikely play by stealing  home.   After tying the game 2-2, Analy had runners at first and third.   Kyle Earley took off from first base early and drew a throw.  Scott Hoffman took off from third and beat the throw home for the lead.

The double steal might not have happened, or would at the least been a footnote, if it wasn’t for some big-time bullpen work.

Junior Garrett Hill came into the game into the sixth inning in a 1-1 tie with the bases loaded and no outs and got out of it allowing only one run.  Then after the Analy rally, in the top of the seventh a runner was at third with one out and Hill got a strikeout and ground out to hold on for the gut-wrenching win.

No. 4 Sonoma Valley had a heck of a finish to defeat No. 5 El Cerrito 4-3.   The Dragons scored the winning run in the bottom of the seventh on a hit by pitch, a wild pitch, a sacrifice bunt and a ground ball.  The ground ball went to shortstop and pinch runner Mike Stovall barely beat the throw to the plate.

It ended a wild finish in which El Cerrito carried a 1-0 lead into the bottom of the sixth.  Sonoma Valley scored three in the bottom of the inning, the big hit a two run double by Dan Deely.   But El Cerrito scored two in the seventh to retie the game at 3-3 and had the bases loaded with no outs.  Devon Graff kept it tied by striking out the side.

Sonoma Valley now has a six game winning streak to raise its record to 19-9.

Both the Sonoma County League teams will be on the road for the semi-finals.

Analy travels to San Rafael to meet No. 2 Drake on Wednesday night, while Sonoma Valley is at No. 1 Acalanes earlier in the afternoon.

The one run results didn’t all work out.

The Division 4 softball bracket got hit the worst with it.  On Friday, No. 3 Cardinal Newman was beaten by No. 6 St. Patrick-St. Vincent 3-2.

On Saturday, it was No. 2 Cloverdale turn to lose the one run game getting beat by No. 7 Moreau Catholic 2-1.

So that sets up one semi-final in the Division 4 bracket of No. 7 Moreau Catholic at No. 6 St. Patrick-St. Vincent.

There were other one run losses.

For 6 1/2 innings it looked like the talking point of the Maria Carrillo baseball team loss would be the dominating pitching performance of College Park’s starting pitcher Anthony Beleto.   He did pitch a complete game in the 4-3 win.

College Park on the strength of Beleto’s pitching and a solo homer by Trevor Larnach and a two run shot by Nick Oar had them leading 4-0 going to the bottom of the seventh.

Beleto retired the first eleven batters he faced and carried a three hit shutout into the seventh.

The story of the game changed in the seventh, when Maria Carrillo scored two and had runners and second and third with no outs.  Then came a base running mistake on a ground ball to third.  While the runner at third was scoring, the runner at second broke for third and was tagged out after a rundown.  So instead of having a runner at second with one out, they had a runner at first.  Sure enough the next batter got a single that if the same thing would have happened and the runner would have been at second, it would have tied the game.   That was the third Puma runner thrown out on the bases in the game, with one being picked off.

No. 5 College Park will get another NBL team in the semi-final.  They travel to meet No. 1 Casa Grande on Wednesday.

That wasn’t it on the one run losses.  NCL I baseball champion St. Helena scored three in the first and didn’t score again losing to Piedmont 4-3.   Piedmont tied the game by the end of the second and scored what turned out to be the game winner in the fourth.

St. Helena went into the game with a fifteen game winning streak and ends the season 20-6.   In the first round St. Helena won its first playoff game since 1978.

There was another one run game that went the local team way and that was in the Division 6 baseball bracket.  The game between Ferndale and Point Arena was originally scheduled for Friday, but was moved to Saturday because of an umpire scheduling mix-up.

Once they got the game going, they didn’t want it to end as Point Arena took the game in ten innings 4-3, the winning run scoring on a pass ball.  The rest of the scoring in the game had been done by the third inning.

Point Arena is 14-1 on the season and will be at Tomales on Saturday for the Section Championship.

Point Arena is the defending champion.

In Division 2 softball, NBL champion and No. 6 seed Maria Carrillo lost to No. 3 Clayton Valley 5-3.    Just like the school’s baseball team, the Pumas made a rally in the seventh that fell short.  For the softball team it was a two run rally.   Maria Carrillo ends the season 20-6.

Meanwhile the Analy softball team had the long trip to Eureka.  It was a longer trip home after a 10-2 loss.   Analy had a 1-0 lead into the fourth when Eureka scored nine to turn things around and put things away.

Back to baseball side of things, St. Vincent lost its first home game since the opening game of 2012 with a 6-4 loss to No. 5 Athenian.

St. Vincent was in the game late despite being outhit 12-4.

There was one other one run game of note and it affects the St. Vincent softball team, who is the Division 5 defending champion and No. 2 seed.

The No. 1 seed Redwood Christian, who went into their second round game 22-0, was upset by St. Bernard 5-4.   St. Bernard trailed 4-0 after two and then rallied, finishing it off with a two run seventh.

There was one other softball game and it wasn’t you typical kind of game.

In Division 6, Anderson Valley held off Tomales 13-9.  The other three games played by local teams scored 23 runs combined and that includes ten by Eureka.