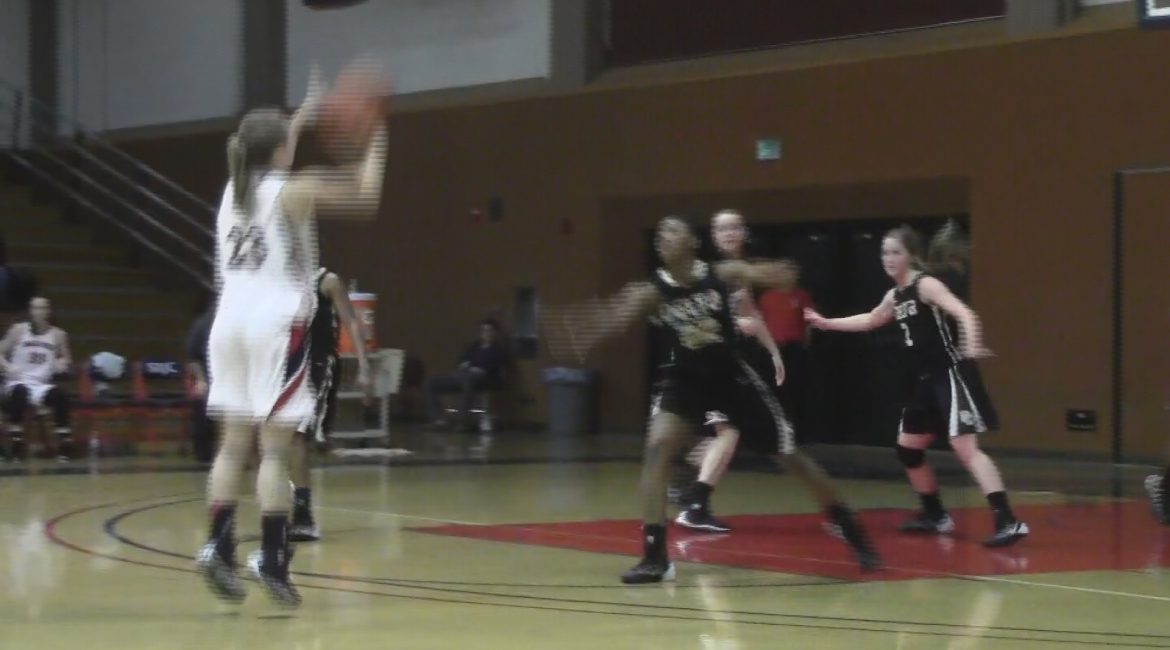 After a successful pre-league start of 8-4, the league season almost opened in disaster as the Windsor Boys Basketball team went in to the fourth quarter at Rancho Cotate trailing.   But after a dominating fourth quarter,  they followed that up with a 64-40 win over Santa Rosa to end the first week of league play one of three teams at 2-0 in NBL play.

It was a game that Windsor had control almost from the beginning and dominated the first half.   Most of the dominating was by senior center Sadik Sufi, who outscored Santa Rosa himself, with 22 of a game high 31 points as Windsor jumped out to a 36-15 halftime lead.

Sufi scored 16 in the first ten minutes of the game as Windsor took a 22-7 lead.  He hit two 3’s and hit three free throws after being fouled on another.   A basket by Jeff Freeburg at the first half buzzer gave Windsor its biggest lead.   Freeburg had a double double with 12 points and ten rebounds

The Santa Rosa program is headed in the right direction and they showed signs of that in the second half.   In years past that kind of start would probably have turn into a 40 point loss. In this one they did show life.  Actually for a few moments, the Panthers were on the fringe of being back in the game.  A 15-4 run to start the fourth quarter cut the lead to 49-40 with three minutes left. They had the ball twice with a chance to get it closer, but they turned the ball over each time.  Windsor scored the games last 15 points, most of it by going ten of fourteen from the line.

Santa Rosa has lost two straight since the win over Cardinal Newman and are 7-6.

The teams at 2-0 besides Windsor are familiar ones in No. 1 Montgomery and No. 7 Cardinal Newman.

Montgomery is 10-4 after a 69-24 win over Rancho Cotate.  Alec Raven led the way with 22 points in a game that the Vikings had a 26 point third quarter.

Cardinal Newman won its 1,000 game in school history in a 55-40 win over Casa Grande.  Connor Rubbattino scored 18 to lead the Cardinals who led the game from the start.

We are now two games away from the first Cardinal Newman-Montgomery game of the season which will be played on January 21st.  Between now and then Montgomery plays two games on the road against Ukiah and Windsor, while Cardinal Newman goes to Rancho Cotate and hosts Maria Carrillo.

Maria Carrillo just missed joining the other three teams at 2-0 in heartbreaking fashion.  Brian Sherwood hit a return shot with :04 left to give Ukiah a 50-48 win.

Maria Carrillo had a 13 point lead with six minutes left in the third quarter.  Ukiah went on a 16-2 run to take their first lead of the game with six minutes left.   It was a battle to the end after that.  Sherwood and David Mason each scored 12 points for Ukiah.   AJ John was the games leading scorer with 17.

Both teams are 1-1 in the league play.

Both the SRJC Men and Women team go to 2-0 in league play.

Matt Hayes scored 20 as the Men pulled away from San Joaquin Valley late to take a 76-72 win.  The Bear Cubs led most of the way and has won six straight to raise its record to 9-6.

SRJC and No. 14 Cosumnes River are the only two teams to make it to 2-0. SRJC went into the week ranked No. 10 in the state.

Carrillo grad, picked up the slack with 17, her third game in four in double figures.

The SRJC Women are 10-7 on the season and along with American River and Sierra is 2-0 in league play.

The SCL race is two games in and four teams are still undefeated in league play.  Because of the unbalanced schedule two teams are 2-0 and the other two are 1-0.

Piner had a four game losing streak before winning two straight to get its record back to .500 at 6-6.

Analy is a young team with three seniors.   The Tigers two leading scorers, Malcolm Jenkins at 12.5 and Chance Ortega at 11.4, are both juniors.    Jenkins has scored in double figures in five straight and eight of nine.  Ortega is also averaging over ten rebounds a game and had a season high 20 in Thursday’s win over Healdsburg.

The Tigers have won three of four to get its record to 8-6.

Sonoma Valley despite a 3-10 overall record is 1-0 in league play and travels to Petaluma.

The other undefeated team at 2-0 is Elsie Allen.  The Lobos overall are 10-4 which is already more wins than they have had in any season since 2009-10 when they went 15-12.   Next week they can make some noise when they host Piner on Tuesday and travel to Analy on Thursday.