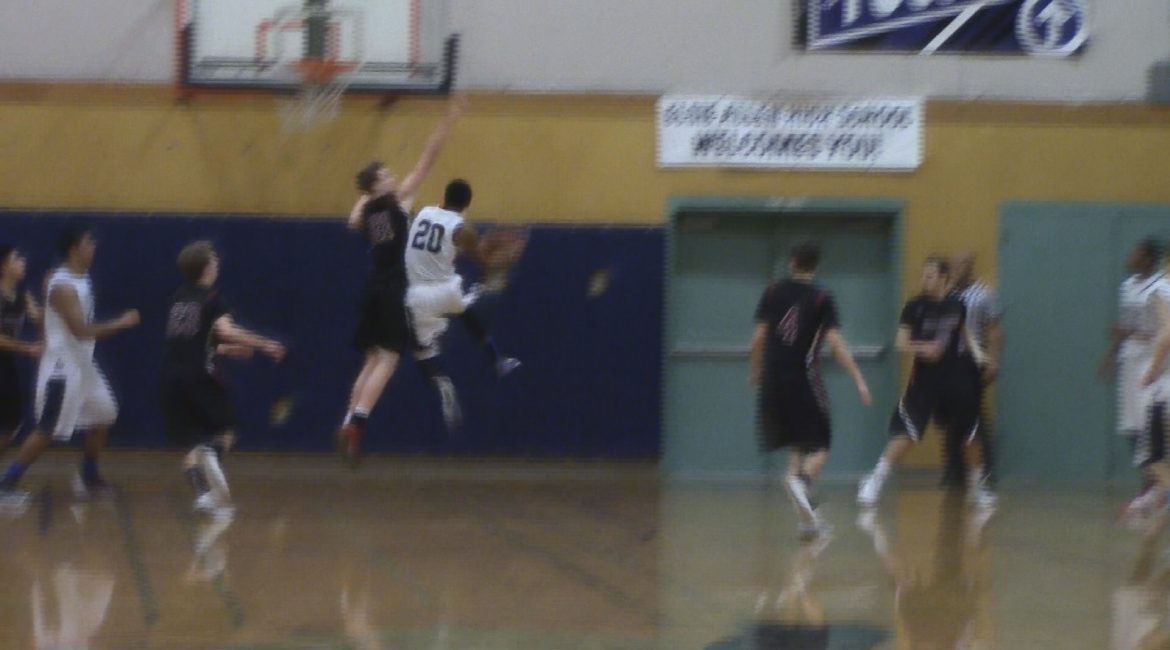 In this week’s YSN365.com rankings the Elsie Allen Boys team was ranked No. 8.  The comment was, “They are having a foundation season that is missing headline win.   Have two shots this week against Piner and Analy.”

Joe Hoeup scored 16 points and Jalen Busby added 14 as the Lobos pulled off one of the school’s biggest win, on the road no less, defeating No. 5 Piner 41-38.

Hoeup, who is the team leading scorer at 17.4 a game, was battling foul trouble and picked up his fourth foul with four minutes left in the third quarter/ Busby picked up the offensive slack with nine third quarter points and then scored the basket that gave Elsie Allen the lead for good with under a minute left.   Then after he had missed his first four attempts, Busby hit two free throws with :06 for the game’s last two points.

Busby wasn’t the only one who had free throw issues.  Elsie Allen on the season is 62% from the line.  In this game they went seven of twenty one.

They won the game anyway thanks mostly to a big defensive effort, led by Erik DeLong who pulled down 14 rebounds and four blocked shots.  It was the fifth game of the season he had at least four blocks.

This is turning into a historic year for Elsie Allen basketball who is 16-7 on the season.  The 16 win mark is two short of a school record which was set in 2007-08 when they went 18-11.   The next win will give them as many wins as they have had the last three years.

The win over Piner also assures that Elsie Allen will be playing post season basketball, as they clinched a spot for the SCL post season tournament.

The first time through against the other three top teams in the league, Elsie Allen went 0-3 with the closest a 47-40 loss at Sonoma Valley.  In the first meeting at home against Piner they lost 50-35.

The best may be yet to come for this program.   They are a young team with only two seniors.   All five starters are juniors.

Now that they got one headline win, they get a shot at another.  On Thursday the Lobos host No. 2 Analy, who besides Elsie Allen, was happier about the Tuesday win more than anyone.    While Elsie Allen was pulling out its win, No. 2 Analy was defeating Petaluma 50-38 to take full control of the SCL race.   The Tigers have a two game lead with three to go and win at Elsie Allen will clinch a tie for the league championship.

In the first meeting Analy cruised to a 67-36 win.

Sonoma Valley rallied from a first quarter deficit and rallied to defeat El Molino 53-38.    Jesse Summers and Cyle Gusse combined for 26 points as the Dragons pulled away from a four point fourth quarter lead.

The four teams for the SCL post season tournament are set.  They will be Analy, Piner, Elsie Allen and Sonoma Valley.  The matchups for the first round, which is on Tuesday February 18th, will be determined.

Sonoma Valley is at Piner on Thursday.

Yes must people expect No. 1 Montgomery to win the North Bay League race but when No. 6 Cardinal Newman travels to No. 4 Maria Carrillo Thursday night, it will be a battle to stay within yelling distance.   Both teams go into the game one game back in the loss column and both teams still have its second shot at the Vikings.

All three teams took one sided wins on Tuesday to set up the Thursday action.  After falling behind early Montgomery defeated No. 7 Ukiah 63-40.  The win sews up a spot for the Vikings in the North Bay League Post Season Tournament.  Sam Averbuck scored 23 to lead the Vikings, who had a 26 point third quarter.

Maria Carrillo broke a 6-6 tie by scoring 11 straight and had control most of the way after that in a 61-43 win over Santa Rosa.  A. J. John scored a game high 19 points and also pulled down 12 rebounds and blocked five shots.  His offense included three of seven 3 point shots for Maria Carrillo who is now 16-6 on the season.

Despite the loss to Montgomery, Ukiah still has a two game lead for the final spot in Post Season tournament.   That is because they got help from Casa Grande who defeated Windsor 51-35.   Drew Busse scored 11 for the Gauchos who even its season record at 11-11.

Ukiah is in fourth place at 5-4.   Windsor and Casa Grande are both 4-6.    On Thursday Ukiah is at Casa Grande, while Windsor travels to Montgomery.