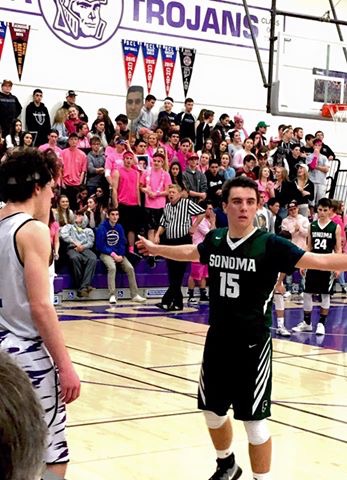 The final week of the regular season winds down as some pivotal matchups can determine league champions and league tournament seedings.
Sonoma County League
The SCL has been clinched. The Analy Tigers have clinched their second straight SCL Title as they remain undefeated in league play. Petaluma is second at 7-3. Petaluma will travel to Analy tomorrow night in what should be a packed house at the Tiger Den. Piner sits at 6-5 and plays their final league game tomorrow against Elsie Allen. Healdsburg is 7-4 and hosts Sonoma Valley on Friday night. Right now, the matchups in the SCL tournament would be Piner @ Analy, and Healdsburg @ Petaluma. The Petaluma-Healdsburg potential game could be shifted to Healdsburg based on tiebreakers if this were to occur.


North Bay League
The NBL just got a whole lot more interesting. Montgomery beat Windsor Monday night 46-45 to bring the Vikings and the Jaguars 10-2 in NBL play. Cardinal Newman hosts Windsor tomorrow. Night. Tonight could be the night Cardinal Newman clinches an NBL championship, or Windsor could help themselves and Montgomery to make it a three way tie heading into the final night of the season. If that were to happen, they should all get wins Friday and then it will come down to preseason drawing numbers. The NBL post season matchups right now sit at Santa Rosa @ Cardinal Newman, and Montgomery @ Windsor. Again, all of this can change come Friday night.
.
Share
Copyright (c) 2016 Splash.
Theme by StylemixThemes.