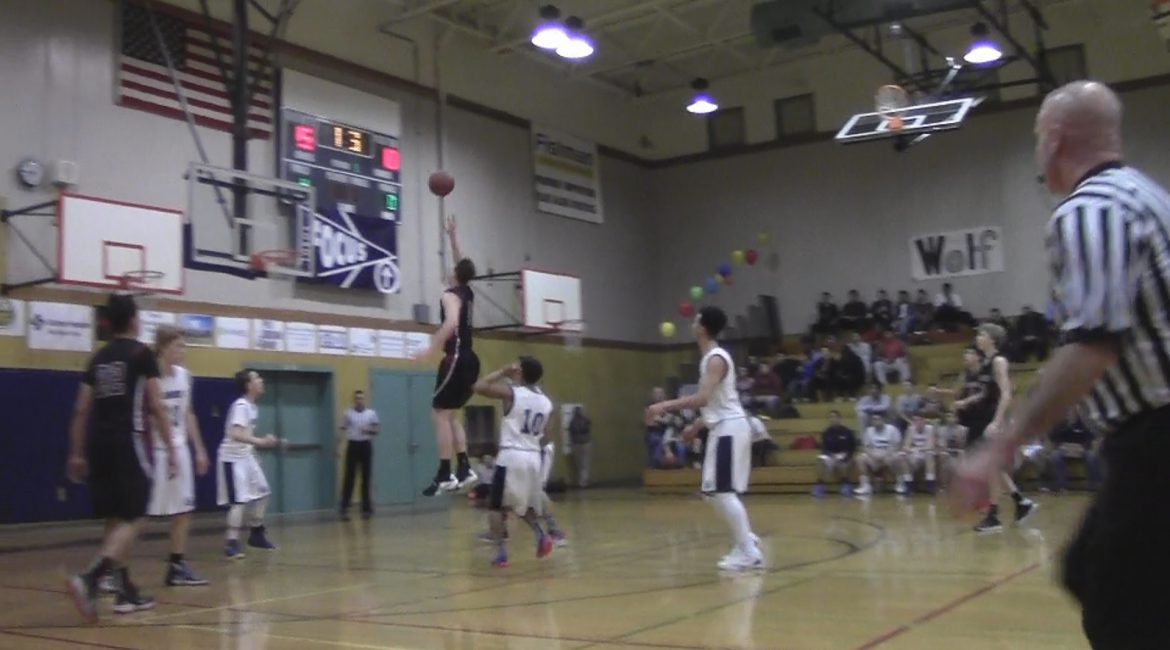 No. 1 Windsor (18-3) (Last Week No. 1)…Continues its march through the North Bay League with a three win week. All nine league wins have been by double figures. The overall winning streak is ten. They can basically put a wrap on the race with a home win over Cardinal Newman on Tuesday.

No. 2 Analy (15-6) (2)…They had a pretty uneventful week with just one game, which was a one sided win over Sonoma Valley. Nick Fujii scored 18 points, which included five 3’s. Jordan Armstrong also pulled down ten rebounds, which is his second highest of the season. The week was like the calm before the storm. Coming up is a big week.
No. 3 Cardinal Newman (15-6) (3)…A three win week. After struggling for a 54-49 win over Casa Grande they had two one sided wins including a 46-31 win at Montgomery in which Conor McCarthy scored 14, one of two games he scored in double figures.
No. 4 Santa Rosa (11-10) (8)…Overall a good week that started with an OT win over Montgomery, the first time they’ve beat Montgomery in over a decade. The week ended with a loss to Windsor. The good news is they got Windsor out of the way for the rest of the league race. Tommy LaVine just missed out on player of the week. His three at the buzzer got the Montgomery game into OT. He followed that up with a season equaling high of 19 points in a 48-45 win over Casa Grande.
No. 5 Petaluma (13-7) (7)…A one win week adds to the best season in years. The win was over El Molino in which they had a 21 point lead after one. Ryan Perez and Colin Stremlau combined for 25 points. Like Santa Rosa, looking good for a rare playoff berth.
No. 6 Piner (11-9) (NR)...Followed up a tough 40-39 loss to Healdsburg with a 57-35 win over El Molino. Jace Foster scored 21 as they stay right in the thick of the SCL race in what was supposed to be a rebuilding season.
No. 7 Lower Lake (11-8) (9)…Continues to play close games and win most of them. They did lose a 50-49 game to St. Bernard’s on Saturday. If they were going to lose one, that was the one to lose. It didn’t affect their lead in the NCL I race.
No. 8 Healdsburg (14-7) (NR)…A stressful week but a two win week. The first was 40-39 over Piner. The second was a tight 50-44 win over Elsie Allen. Landon Courtman missed by one rebound in the Piner game of having a two double-double week. He is averaging 15.1 points and 8.6 rebounds.
No. 9 Montgomery (11-9) (4)…The week didn’t start off so well with the losses to Santa Rosa and Cardinal Newman. It ended with their best game of the season with Evan Poulsen scoring 14 in a 67-45 win at Ukiah.
No. 10 Kelseyville (16-4) (NR)…A 2-0 week with the big win over Fort Bragg 56-53. Kyle Ellis scored a season high 23 and is averaging nearly 14 a game. He has scored in double figures in all but two games this season.
PLAYER OF THE WEEK
Gabe Knight (Windsor)
Three double-doubles including a 24 point game against Maria Carrillo that started the week. He ended it with a 14 point, ten rebound game in a 55-33 win over Santa Rosa that kept them in control of the NBL race.
LEAGUE RACE UPDATES
NORTH BAY LEAGUE
The last shot at a close league race is Tuesday when Windsor hosts Cardinal Newman. At 9-0 Windsor goes into the game with a two game lead over Cardinal Newman.
Cardinal Newman has a one game lead over Santa Rosa for second place, with Montgomery one game behind Santa Rosa.
It is a big week for Ukiah who is one game behind Montgomery for the final NBL post season tournament berth. On Tuesday they host Santa Rosa and on Thursday they are at Cardinal Newman.


SONOMA COUNTY LEAGUE
The race is still wide open. One loss separates the top three with Analy at 6-1, Piner at 6-2 and Petaluma 5-2.
This is a three game week and a big week for Analy. On Monday they are at Piner, Wednesday they host Healdsburg and on Friday go to Petaluma.
Healdsburg is 5-3 and is in good shape for a spot in the SCL post season tournament.
NCL I
This is the closest race going with four teams within one game of first place.
Lower Lake at 7-1 is followed by Cloverdale, Fort Bragg and Kelseyville, who are all 6-2.
This is a three game week and each night, two of the leaders are meeting each other.
Kelseyville goes to Cloverdale on Tuesday and then has a home game against Lower Lake on Saturday. On Thursday, Lower Lake hosts Fort Bragg.
NCL II
It appears to be a two team race with Roseland Prep at 7-0 holding a one game lead over St. Vincent in the loss column. The two teams meet at Roseland Prep on February 12th.
Roseland Prep has two games against teams under .500 this week.
St. Vincent hosts Upper Lake on Friday and then goes to Sonoma Academy next Tuesday. Both those teams are tied for third with three losses.
NCL III
At 7-0 Anderson Valley has a one game lead over Mendocino. The two teams meet Tuesday at Mendocino. The first game was a 52-45 Anderson Valley win.
SMALL SCHOOL SCHOOL BRIDGE
Archbishop Hanna is 18-3 overall and 9-0 in league play. No other team has less than two losses. Starting Monday they have four games in five days. Only one of them is in league and that is at Rio Lindo Adventist on Wednesday. According to MaxPreps Rio Lindo Adventist is 5-2 in league play.
My email address is jacpasquini@comcast.net
Share