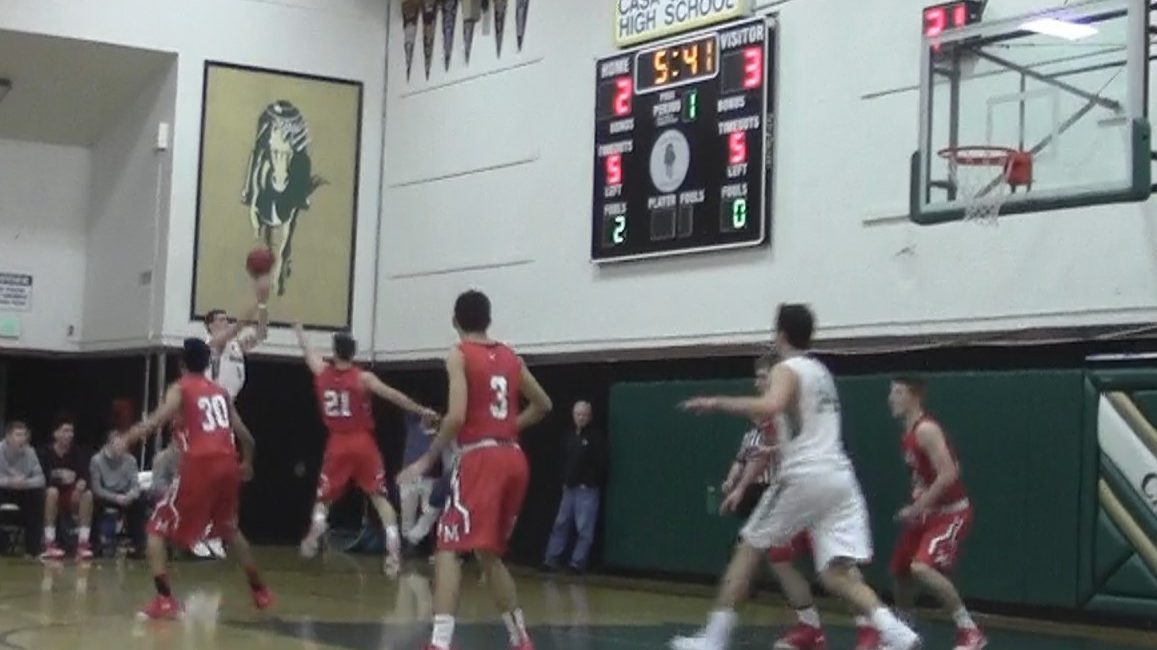 On the opening night of the 10th Annual Brett Callan Memorial Tournament, Miramonte met Analy in the third game. In the preview for this tournament, it said here that this could be the championship game if the brackets were different. It turned out it may have been just that without the title. The game went down to the last seconds. Analy trailed by two and had the ball with :15 left. Miramonte forced two turnovers, hit free throws and held on for a 66-61 win.


That turned out to be the defining moment for Miramonte on its way to taking the tournament championship. The next two games they defeated two North Bay League teams by 37 points, wrapping things up on Saturday with a 73-36 win over Montgomery in the tournament’s championship game.
Montgomery hung with Miramonte for a while. The Vikings had a 16-15 lead a minute into the second quarter. Miramonte then went on a 17-3 run to take control. Miramonte took its first 20 point lead early in the third quarter and it never got under that the rest of the way. Eddie Ionescu scored 21 points and was named the tournament MVP.
Miramonte is now 7-1 and a team we will probably be hearing from come playoff time.
Lane Young led Montgomery with 12 points. Young and Hayden Lee were chosen to the All-Tournament team. Montgomery has two second place finishes in tournaments this December and is 5-4 on the season.
After the opening round loss to Miramonte, Analy took home the Consolation Trophy. On Saturday they defeated Cardinal Newman 57-46. A 9-1 run in the second quarter gave Analy a 31-23 lead and that is about where it stayed the rest of the way. Aidan Toner-Rodgers scored 23 to lead Analy, who is 7-1 on the season and is the favorite in the SCL race.
The best game of the final evening was the third place game. If there was any doubt that the crosstown rivalry between Casa Grande and Petaluma was still a thing, that was answered. A near full house was on hand and the two teams put on a good show before Casa Grande held on for a 46-43 win.
It was a game that Petaluma never led, but had a heck of a chance late in the game. Trailing 44-43 with twenty seconds left, Ryan Perez made a steal, drove the length of the court and missed a layup under pressure. Casa Grande got the rebound and Robbie Sheldon, who made the All-Tournament team, was fouled. He hit two free throws for the last of his team high 14 points. Petaluma then missed a three pointer that would have sent it into overtime.
Petaluma had a habit of starting off slow in this tournament and that was the case in this game, taking over three minutes to score and falling behind 5-0. They did regroup to make it 7-7 with three minutes left in the first quarter. That turned out to be the last tie in the game as Casa Grande scored the next seven.
In the first half, Petaluma didn’t have an answer for 6’ 6” center JJ Anderson, who also made the All-Tournament team. After Petaluma got back within 16-13, Anderson scored all of Casa Grande’s points in a 6-2 run which gave them a 22-15 lead with 1:50 left. Anderson had a double-double by halftime and ended up with 13 points and fourteen rebounds, which was his second double-double of the tournament.
Casa Grande’s biggest lead was 40-30 with five minutes left. It was still 44-38 with three minutes left, when Petaluma made its final push. Ryan Cox hit back to back field goals to cut the lead to 44-43 with thirty seconds left to set up the finish.
Petaluma had three players score in double figures, including Perez who was picked to the All-Tourney team.
This is the Annual Tournament honoring Brett Callan, who died in a car crash when he was 16. The tournament will now also remember Casa Grande head basketball coach James Forni. In his first season as head coach, if not for the car crash, Callan would have been on his team. The idea of this tournament was his. This past June, he passed away after a long battle with cancer at the age of 36. There is now a James N. Forni Team Sportsmanship Award. The first one belongs to Washington of San Francisco.
VINCERO
10th ANNUAL BRETT CALLAN MEMORIAL TOURNAMENT
AT CASA GRANDE HIGH SCHOOL
FIRST ROUND
Petaluma 59 Cardinal Newman 53 (OT)
Montgomery 56 Northgate 38
Miramonte 66 Analy 61
Casa Grande 67 Washington (SF) 56
SECOND ROUND
LOSER BRACKET
Cardinal Newman 53 Northgate 42
Analy 77 Washington (SF) 48
WINNER BRACKET
Montgomery 46 Petaluma 35
Miramonte 69 Casa Grande 32
CHAMPIONSHIP NIGHT
7th PLACE…Northgate 62 Washington (SF) 59
CONSOLATION…Analy 57 Cardinal Newman 46
3RD PLACE… Casa Grande 46 Petaluma 43
CHAMPIONSHIP…Miramonte 73 Montgomery 46
My email address is jacpasquini@comcast.net
Share