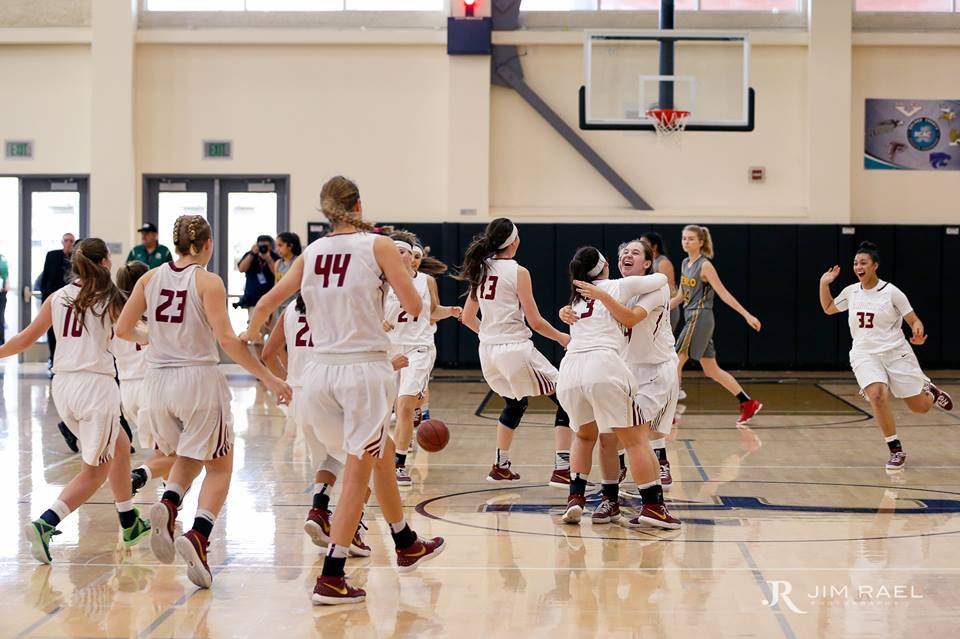 The Cardinal Newman Girls Basketball team waited a long time for this moment. It was a little over a year ago, when the dream of a state title for the 2015 team ended. They were defeated in a tight game by Brookside Christian in the Nor Cal Semi Final. They had to wait a little longer than expected to right that wrong.


In a game that felt like it was never going to start, the Cardinal Newman Girls did it and did it routinely. In a game they led from the start they defeated Menlo 51-32 in the Division 4 Nor Cal Championship Game.
The biggest battle on this Saturday was waiting for the start of the game. The Division 5 Boys Championship game that was played right before the Cardinal Newman-Menlo game will go down as a classic. It took three overtimes for the No. 1 seed St. Joseph Notre Dame to win that championship, defeating Stuart Hall 67-58. The next two teams waited in uniform for the game to end and it started about thirty minutes late and the wait showed.
It took over three minutes for the first points of the game. It was scored by Hailey Vice-Neat and it turned out that would be Menlo’s best and only chance to take the lead in this game. Menlo wouldn’t score for another two minutes. By then Cardinal Newman had a 6-0 lead.
Actually to say that the late start showed for both teams, might not have been the case. Cardinal Newman looked like the better team. They won every meaningful stat, including rebounds and turnovers. Led by Lauren Walker’s 13, Cardinal Newman had a 42-29 margin in rebounds and also forced twenty turnovers.
There were two moments when Menlo made a little run and each time Cardinal Newman stopped the momentum with the three pointer. The first time was at the start of the second quarter when Menlo hit the first two basketballs to cut the Cardinal Newman lead to 10-6. Vice-Neat and Avery Cargill then hit back to back three’s to regain control. Cargill hit another three in what turned out to be a 16-2 run and Cardinal Newman had a commanding 26-8 lead.
Menlo had one more run in them and it was a serious run. They scored the next 11 points to cut the lead to 26-19 midway through the third quarter. Once again the three point shot came into play. This time it was Tal Webb and Maiya Flores who hit back to back 3’s, which started a 14-4 run and the lead was back to 17 by the end of the third quarter and Cardinal Newman had their Nor Cal Championship.
Vice-Neat led Cardinal Newman with 14 points and besides the 13 rebounds, Lauren Walker had 13 points.
Cardinal Newman is now 30-5 on the season and has one more hurdle. They have some time to enjoy this moment. The Division 4 championship game is not until next Saturday in Sacramento. The game will be at 10 am against the South Champion Antelope Valley.
But for the moment they can let it sink a little what they have accomplished up to now.
GIRLS DIVISION 4 STATE CHAMPIONSHIP GAME
SATURDAY MARCH 26TH
SLEEP TRAIN CENTER ARENA SACRAMENTO
CARDINAL NEWMAN (30-5) VS. ANTELOPE VALLEY 30-2
My email address is jacpasquini@comcast.net
Share