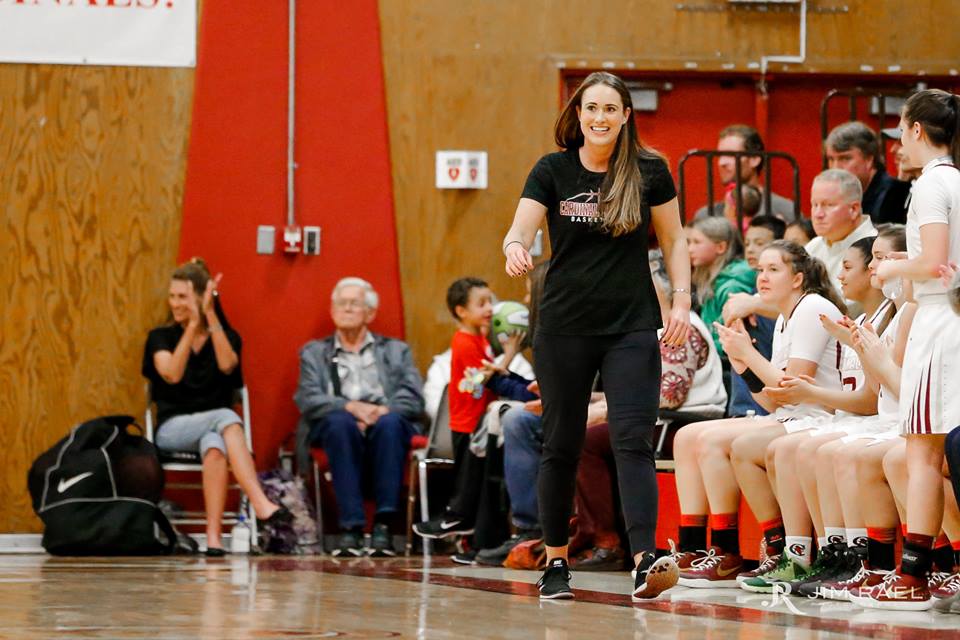 The date was December 3rd. It was the opening round of the Cardinal Newman Girls Basketball Tournament. The fourth game that night was Cardinal Newman against Menlo. Cardinal Newman won that game 62-51. It not only was the opening game of the tournament, it was the official opening game for both teams of the season.
Three and a half months later they meet again. They are a combined 50-12, which includes losses in their Section playoffs and a close Nor Cal playoff win. This time they meet in the Division 4 Nor Cal Championship game, with a trip to the Division 4 State Championship game at stake.


The game is Saturday at 2 pm at American Canyon High School.
After rallying from a 16 point deficit to take the second round game over Scotts Valley, Cardinal Newman looked more like the team that the local fans have seen all season, by taking a 69-32 win over Sacred Heart Prep.
The two Nor Cal wins did have one thing in common in that Cardinal Newman had a big second half overall and a big third quarter in particular. In the last two games, Cardinal Newman outscored its opponent by a combined 44-12. In the game against Scotts Valley, they needed the big third to get back into the game. In the game against Sacred Heart Prep, it put things away.
Maiya Flores scored 20 points and Hailey Vice-Neat added 15 to lead Cardinal Newman. The two combined for ten 3’s to raise Cardinal Newman’s record to 29-5. Cardinal Newman jumped out to a ten point lead in the first half. By the mid third quarter, they had a 24 point lead and were moving on.
Cardinal Newman is the 14th local girls’ team to get this far in the state playoffs. The last time was 2007 when Rincon Valley Christian lost the Division 5 title game to Branson 39-36. The last local team to win this game was Petaluma. That was in 2000 when they defeated Sacred Heart Cathedral 54-38.
Overall, the local teams have a 5-8 record in this game. The team that has been to this game the most is Ursuline who went 1-2. The most successful team is Healdsburg, who won this game in 1991 and 1992.
The Menlo team is quite a story. Their head coach is John Paye, who in the 80’s was a starting quarterback at Stanford and played for the 49ers.
That isn’t why this it is quite a story though.

The Menlo Girls are playing in their first Nor Cal Championship game in twenty five seasons. Paye was the coach of that team. That was after he graduated from Menlo and was part of the Boys Basketball State Championship team in 1983. That last trip to the Nor Cal Championship game would lead to the school’s third straight state championship His younger sister Kate was on all three of those teams. She would later go to Stanford and be part of an NCAA Championship team.
Paye hasn’t coached every year since then. He returned for his second run at Menlo in 2008. They had just come off a very un-Menlo like 7-16 season and 1-9 in league play. Paye’s very first year was quite an improvement, as they went 24-8 overall and 10-0 in league play. Since then they have hit the twenty win season mark three times and won three Central Section championships.
One of the players on this year’s team is his daughter Hannah, who is a sophomore and is averaging 9.9 a game, which is second highest on the team. She hit the deciding three pointer in the semi-final 48-47 win over No. 3 St. Mary’s –Albany. Sister Kate was at that game.
The win over St. Mary’s was the close game for Menlo in the Nor Cal playoffs. Paye’s three pointer broke a 45-45 tie with just under a minute left and they held on. That gave her a game high 15 points.
Junior Sam Erisman added 14 in the win and on the season is Menlo’s leading scorer, averaging 17.1.  She has hit the 20 point mark in eleven games, including six of the last eight.
Two years ago these teams met in the first round with of these playoffs, with Cardinal Newman going on the road and taking a 47-35 win. As a freshman Erisman was Menlo’s leading scorer in that game with 18. For her career she went over the 1,000 point mark two games ago.
Power ranking wise, the Cardinals, as they have been in every game in the playoffs except against Salesian, are the favorite. Cardinal Newman is No. 23 in the state, Menlo is at No. 47.
This game is one of six at American Canyon High School on Saturday.
THE SCHEDULE
10AM—Division 5 Girls…No. 1 Eastside College Prep (18-11) vs. No. 2 St. Joseph Notre Dame (26-8)
NOON—Division 5 Boys…No. 1 St. Joseph (Notre Dame) (24-9) vs. No. 7 Stuart Hall (22-11)
2 PM— Division 4 Girls…No. 1 Cardinal Newman (29-5) vs. No. 2 Menlo School (21-7)
4 PM—Division 4 Boys…No. 3 Palma (25-4) vs. No. 4 West Campus (29-5)
6 PM—Division 3 Girls…No. 1 Sacred Heart Cathedral n(19-9) vs. No. 10 Inderkum (24-8)
8 PM—Division 3 Boys…No. 2 Manteca (27-6) vs. No. 8 Bishop O’ Dowd (17-14)
My email address is jacpasquini@comcast.net
Share