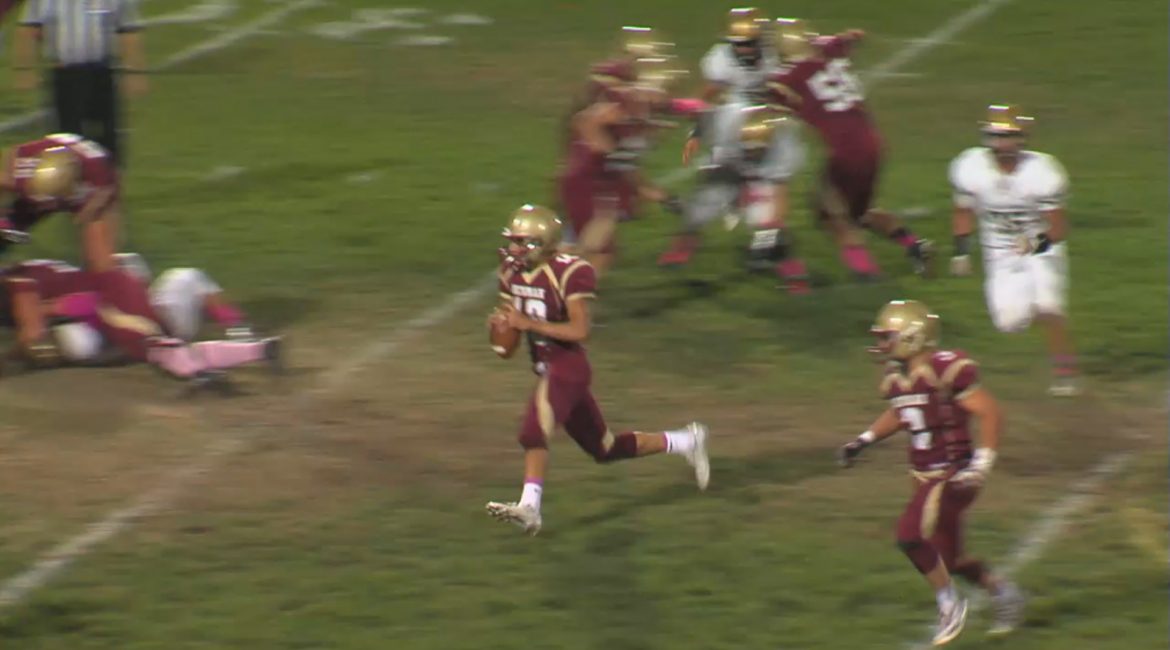 When the announcement came  about a month ago that Cardinal Newman and Marin Catholic were moving to Division 4, the championship game for the Division was written in very thick pencil. At times last week during the semi-finals, there was a panic to find some extra strength white out. But after a couple of scares, one really big one, no white out was needed.
When it comes to football playoffs games, Cardinal Newman-Marin Catholic is not only one of the best match-ups as far as the North Coast Section goes, but one of the best in the state. Both teams have been to the state championship game and both are planning to go again.


Really this should be a pre-league game.
Since the NCS playoffs began in 1976, the teams are usually in the conversation when it comes to a section championship. Cardinal Newman has won 11 section championships, Marin Catholic has won eight. Marin Catholic has been to more championship games, but has lost seven.  Cardinal Newman has lost one.
Cardinal Newman has been a force since the beginning, winning the first two and five of the first ten. Marin Catholic has had the better of things lately, winning two of the last six and losing the championship game three other times. Yes that means they are in their sixth NCS championship game in the last seven years.
Considering all that success these teams have had, they don’t see each other that often in the playoffs. Sometimes they were in different brackets, sometimes it just didn’t work out.
This is only the fourth meeting, with Marin Catholic winning two of the first three. The last time they met was in the 2007 semi-finals which Marin Catholic rallied for 17 down to win 42-37. The quarterback for Marin Catholic that day was Jared Goff, who is rewriting many of the California record books and figures to be a very high choice in next year’s NFL draft. One of the Cardinal Newman players was Scooby Wright, who won many national defensive honors last season at Arizona. It the 2007 game, he was knocked out of the game in the second quarter with an injury.
Both teams had similar seasons. They take great pride in a tough pre-league schedule, which usually comes with a loss. Going into league play Marin Catholic was 2-1 and Cardinal Newman 1-2. One of the three teams that beat them is still going and the other two were eliminated last week.
Once league play started, the losses ended.
Marin Catholic has an eleven game winning streak and won the Marin County League. The average score of its league games was 44-6.
Cardinal Newman has a ten game winning streak and won the North Bay League. The average score of its league games was 41-12.
The playoffs have been similar too. After coasting to the semi-finals (Marin Catholic had a first round bye), both rallied from two touchdown deficits in the semi-finals to get to this game. The Cardinal Newman win was much higher on the dramatic scale than Marin Catholic’s, but both faced seeing their season end prematurely and came through.
Not only has their seasons and playoffs been similar, but so are the teams’ offenses.
Marin Catholic is averaging nearly 40 points a game and is led by senior quarter Darius-James Peterson, who has passed for over 2,000 yards and also rushed for nearly 1,000 yards.
Cardinal Newman is averaging over 40 points a game and led by Junior quarterback Jordon Brookshire, who is the same kind of threat passing and running.
If it comes down to defense the advantage might be to Marin Catholic. They have given up 8 points a game and have nine shutouts. Last week though, they gave up a season high 27 in the win over Moreau Catholic.
Cardinal Newman has given up an average of 17. They also gave up a season high last week in the 43-42 win over Fortuna.
The seasons have been similar for the teams, so similar that although most experts thought Marin Catholic would get the No. 1 seed, but couldn’t really say why. Marin Catholic did get the No. 1 seed, which at the time didn’t seem like that big a deal. It turns out it wasn’t. The game is at Rancho Cotate and the trip for Cardinal Newman fans is shorter and to a familiar place. That advantage for that goes to Cardinal Newman. That is offset that Rancho Cotate has a field of fake grass, which is the kind of field that Marin Catholic plays on, while Cardinal Newman plays on real grass.
Another slight advantage and it is very slight goes to Cardinal Newman. The last time Cardinal Newman won an NCS Championship was in 2010. The championship game was at Rancho Cotate and as a No. 2 seed they beat No. 4 Encinal 35-7. In the semi-finals the week before, Encinal beat No. 1 Marin Catholic 20-15 to stop that Cardinal Newman-Marin Catholic championship game.
This is a big time matchup. In college football, it compares to Ohio State against Alabama. In baseball it’s a Giant-Dodger playoff series and as a late addition, the Christmas Day game between the Warriors and Cavaliers.
This time it is happening. There was a lot of controversy about these two teams moving to Division 4, but they didn’t do anything wrong or break any rules.
Now the game is reality and it is can’t miss TV (or radio).
It should be something else.
DIVISION 4 CHAMPIONSHIP GAME
No. 1 Marin Catholic (11-1) vs. No. 2 Cardinal Newman (11-2)
AT RANCHO COTATE HIGH SCHOOL…SATURDAY 7 PM
KSRO 1350 AM/103.5 FM BROADCAST AT 6:35
CALPREPS PROJECTION: Marin Catholic by 2
DIVISON 3 CHAMPIONSHIP GAME
No. 1 Campolindo (12-1) vs. No. 2 Analy (13-0)
AT DIABLO VALLEY COLLEGE…FRIDAY 7 PM
KSRO 1350 AM/103.5 FM BROADCAST AT 6:35
CALPREPS PROJECTION: Campolindo by 9
My email address is jacpasquini@comcast.net
Share