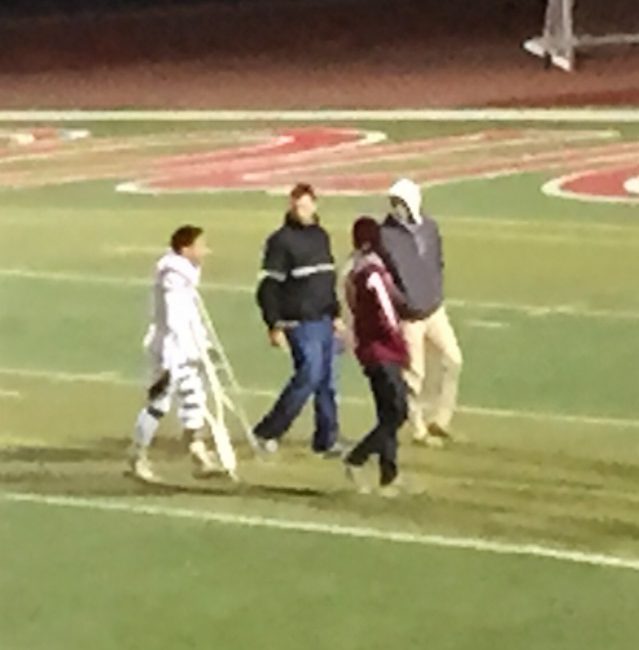 The big showdown between Marin Catholic and Cardinal Newman played out like games we have in a couple of other playoff games. In some ways it was like the Analy game on Friday night with the local team falling way behind in the first half, make a nice comeback only to fall short.

It was also like the Marin Catholic-Fort Bragg game. Like Fort Bragg, not only did Cardinal Newman get beaten on the scoreboard, but beat physically. In the end Marin Catholic defeated Cardinal Newman 38-21 to take the North Coast Section Division 4 championship.
There was one difference in this game than the other two and that was the start. Cardinal Newman received the opening kickoff and looked normal. On the first play of the game, quarterback Jordon Brookshire went on a 15 yard run. The started an 11 play 80 yard drive, which took nearly the first half of the first quarter and ended on a Brookshire one yard run and Cardinal Newman had a 7-0 lead.
That was the last happy moment for Cardinal Newman as things fell apart and fell apart fast. Three plays and thirty five seconds later it was a tie game. Their first play was a 42 yard run, which was followed by a ten yard pass. Then the Marin Catholic quarterback Darius-James Peterson went 32 yards for a score and just like that it was 7-7.
It was on the next series that the game took on the Fort Bragg look. Cardinal Newman’s do everything star Damien Wallace injured his knee and was knocked out of the game. It was the start of a long night both physically and on the scoreboard for Cardinal Newman. It took the team along time to recover from that hit and by the time they did the game was basically over.
That wasn’t the only injury for Cardinal Newman. The leading rusher Michael Ortola was out for a while and went through concussion tests. He did return and acted like the leading rusher. Also linebacker Bala Triolo went out in the first with a concussion. He didn’t return.
Cardinal Newman defense was no match with Wallace on the first drive and that would be the trend the rest of the game. The next time Marin Catholic got the ball it wasn’t as quick, but same results. They even got some luck they didn’t need. Peterson threw a pass attended for one receiver that he deflected to another, Peter Armusewicz for 14 yard scoring play. That was on the second play of the second quarter and gave Marin Catholic the lead for good.


By halftime, Marin Catholic had a 28-7 lead and full control. In Friday’s game Analy was behind Campolindo at the half 31-7 and made a nice rally to get it close. Things didn’t start off well for Analy, after losing a fumble on the first snap of the second half. Things didn’t start off promising for Cardinal Newman either. Marin Catholic took the opening kickoff and ate up over eight minutes. The only saving grace of the drive was that they only got a field goal out of it, but still had a commanding 31-7 lead.
Cardinal Newman responded with its first good offensive series since the opening series. The drive ended with a 28 yard run by Michael Ortola. The next series Marin Catholic fumbled it away for its only turnover and Cardinal Newman took advantage with another Ortola score. After the first score, Cardinal Newman converted on a two point conversion and with the score 31-21, they needed another one. This one failed and after each score they tried an onside kick that also failed. Marin Catholic then went on another long drive and scored to put things away.
Outside the fumble, Peterson was unstoppable with his feet and arm. Throwing he was 13 of 15 for 169 yards and two touchdowns. He also rushed for 108 yards on 22 carries and two more scores.
Despite the one sided score, Cardinal Newman did move the ball. Both Brookshire and Ortola rushed for over 100 yards and the three touchdowns.
But in the end the combination of the Peterson led offense and the injuries were too much to overcome.
The game between the two heavyweights turned out to be disappointing. Marin Catholic is now 12-1 on the season and will get a Nor Cal berth sometime today. It is expected they will be matched up against Central Catholic who is 14-0 on the season.
For Cardinal Newman a disappointing finish to a season that they went 11-3 and won the NBL Championship. The move to Division 4 didn’t accomplish its goal of a state playoff berth.
NCS DIVISION 4 CHAMPIONSHIP GAME
No. 1 Marin Catholic 38 No. 2 Cardinal Newman 21
Cardinal Newman ends the season 11-3
NCS DIVISION 3 CHAMPIONSHIP GAME
No. 1 Campolindo 38 No. 2 Analy 28
Analy ends the season 13-1
OTHER NCS CHAMPIONSHIP GAME
DIVISION 1
No. 1 De La Salle 35 No. 3 Foothill 0
De La Salle has had an NCS championship every year since 1993.
DIVISION 2
No. 1 Clayton Valley Charter 23 No. 3 Concord 22
The closest thing to an upset and would have been the upset of the year. After Concord’s last touchdown they failed on a two pointer and then had a pass intercepted with a minute left.
DIVISION 5
No. 2 St. Bernard Academy 31 No. 1 Berean Christian 17
St. Bernard Academy is coached by former Piner head coach and Windsor assistant Matt Tomlin. They were the only team to win a section championship that wasn’t a No. 1 seed.
All the winners of the championship game moves on to the state playoffs.
My email address is jacpasquini@comcast.net
Share