Cardinal Newman Shut Down By Valley Christian In NorCal Championship 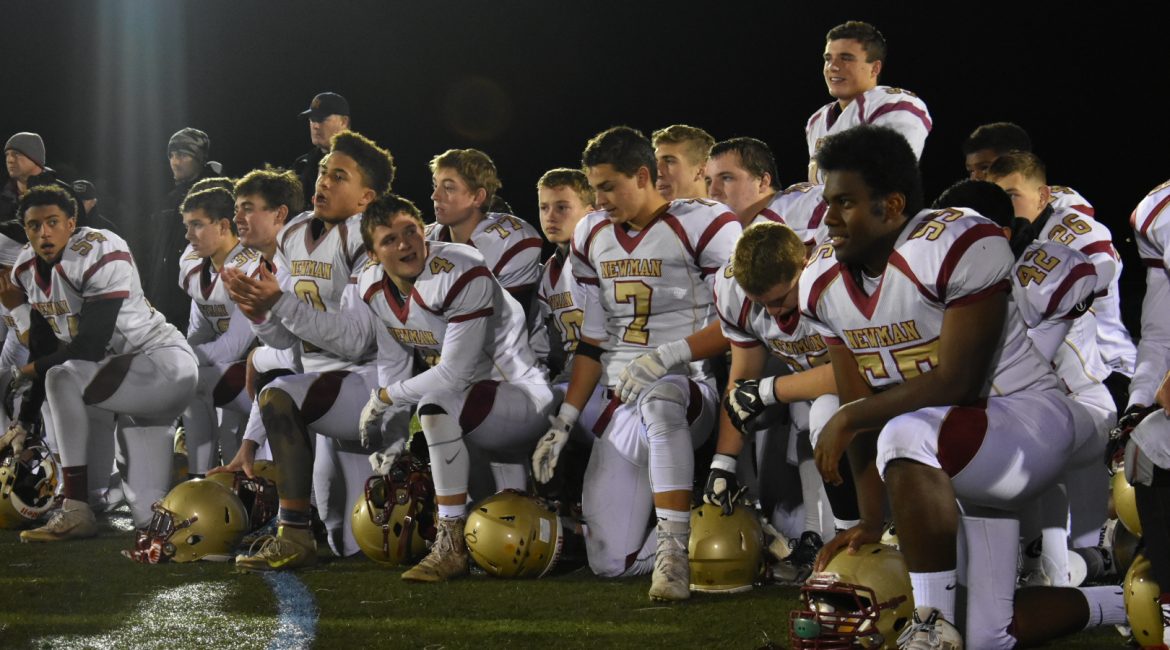 Head coach Paul Cronin had his team primed and ready for yet another CIF state title run, on the heels of a 44-21 romping of St. Bernard’s for the NCS championship. An explosive Cardinal team, averaging over 45 points per game, would battle a ferocious Valley Christian Warriors team in the Division 2-AA title game Friday night; a berth to the state title game in Sacramento at stake. But the Cardinals had finally met their match, being overwhelmed by the Warriors’ reckless defense and near-invincible ground game in a 31-6 defeat in San Jose.
After a quick three-and-out by the Cardinals, the Warriors got on the board first with a Bailey Schroeder 25-yard field goal, on an imposing drive which consumed seven minutes of the first quarter.  But Kyle Carinalli’s big 22-yard run off the screen pass, along with huge 15+ yard runs by Brookshire where he broke free, got the Cardinals into scoring position, as Brookshire took the snap and barrelled forward for the 1-yard score. Jack Murray’s ensuing extra point try would hook far wide to the left though, but Newman had gained some momentum, holding a 6-3 lead at the end of 1.
Warriors QB Miles Kendrick then scored on an emphatic 66-yard run, as he faked the handoff and took off straight ahead splitting the linebackers, hiding behind downfield blocking and taking it the distance. On the Cardinals’ next drive, Brookshire’s pass got tipped in the air at the line of scrimmage, before Anthony Flores outjumped the intended receiver to come down with the interception.

Now already in the redzone, Miles Kendrick pulled the handoff away from the runningback Javon Sturns fooling everyone, and then escaped the opposite direction, hustling to the corner and leaping for the pylon. The Warriors enjoyed a 17-6 halftime lead, but by look on the Cardinals’ faces, you’d think they were down 30. Valley Christian’s swarming defense held Newman in check for a majority of the game by stifling runs, allowing no big plays, and frequently getting to the quarterback.

Following Sturns bringing the kickoff out to the 41 and then facing a 4th-and-10 situation, Kendrick stepped up in the collapsing pocket and dodged numerous tackles for a huge 20-yard pickup. Sterns got the handoff again at the goal-line and smashed his way through to balloon the lead to 24-6 with 5:06 in the 3rd quarter. The Warriors dominated time of possession all night, as every single drive melted huge time off the clock. The Cardinals’ defense was just taking a beating being out there for so long, as Brookshire and his offense could only watch from the sideline.


Perhaps the most deflating play of the game was Irvin Mann batting one of Kendrick’s 3rd down passes into the air, but it fell into D’Angelo Mckenzie’s hands as he ran for big yardage, thus extending the slow and painful possession on defense for Newman. Javon Sterns proceeded to take the handoff and punched it into the endzone again with 3:45 to play. Jordan Brookshire, desperate for any kind of rhythm whatsoever, was sacked on 4th down to turn the ball over and end the ball-game.

Cardinal Newman could only muster five first downs all game, as Valley Christian dominated statistical categories that the Cardinals had so regularly dominated throughout their story-book season. The otherwise-electrifying Brookshire was held to just 88 passing yards and his team’s only score, while Miles Kendrick bested him with 139 yards rushing and two touchdown runs to lead the Warriors’ cutthroat ground attack. Javon Sturns finished with 81 yards on 19 carries for two TD’s himself.

The Cardinals’ historic playoff run would abruptly come to a close, but this team should have nothing to hang their heads about. A 12-2 overall record, 7-0 in league, a 45 points per game average, NBL champions, NCS Division 4 champions, and a chance to go to state; all remarkable achievements that this renowned Cardinal Newman football program will not soon forget.
Share
Copyright (c) 2016 Splash.
Theme by StylemixThemes.