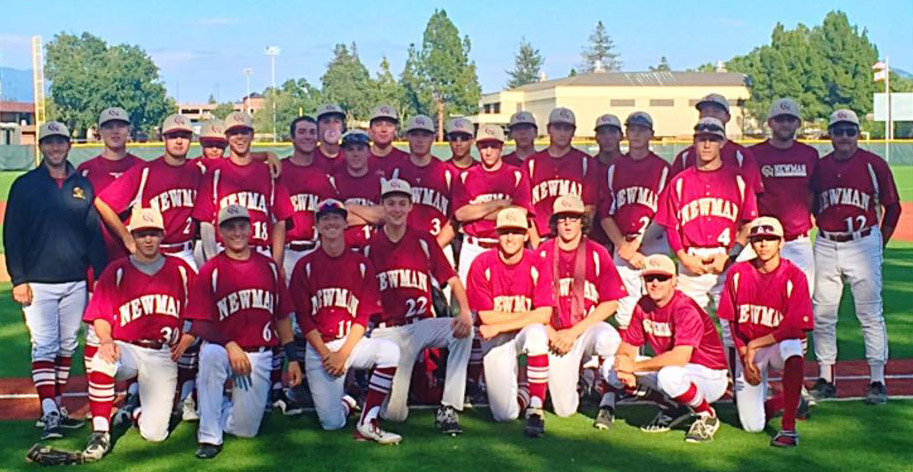 The NBL Post Season Baseball tournament had the same scenario as the league’s softball tournament. The league champion made the championship game, and lost to the team that finished in second place.
On Thursday, Rancho Cotate defeated Ukiah in the NBL Softball Championship game; on Friday Cardinal Newman defeated Casa Grande.
Pitching and defense has been on display in the North Bay League baseball race this season and so it should come as no surprise that it was on display in the league post season championship game. The two teams combined for six hits and Cardinal Newman scored all the runs in the game in third to take a 2-0 win.
The pitching stars were Cal Clamer of Cardinal Newman and Eric Parnow of Casa Grande. Clamer went the distance giving up four hits, striking out five and walking three. After a dominant start in which he retired nine of the first ten batters he faced, he did face some challenges. In the next three innings Casa Grande got two runners on base. The biggest challenge was in the sixth, when a walk and an error put runners and first and second with one out. He got an inning ending double play and after allowing a hit in the seventh, completed the shutout.
How good Clamer was, Parnow was just as good. He pitched five innings and gave up two hits. Like Clamer he struck out five and walked three. Like Clamer he had faced some challenges. One was in the third in which between a strikeout he gave up a two singles. After getting the second out with a strikeout, he looked like he was out of the inning when a fly ball was hit to center. The ball was dropped and the only two runs of the game scored.
Cardinal Newman would have a couple of more chances, but that’s would be all they need to win its first game over Casa Grande in three tries. In the two league games they were outscored 16-3. They go into the playoffs with a 21-5 record.
Casa Grande, who had a fifteen game winning streak snapped, goes into the playoffs 20-6.
Both teams will be in the Division 2 bracket and should both get a seed high enough for home games through at least the first two rounds. Casa Grande gets the automatic bid for being NBL Regular Season Champions.
ST. VINCENT TAKES NCL II CHAMPIONSHIP
Of  all the games this championship week, this was the only one for the real league championship. In the last regular season game of the season, St. Vincent defeated Sonoma Academy 7-0.  The two teams went into the game tied for first.
Liam Galten pitched a three hitter to raise his record to 7-0.  In his last five appearances he has pitched twenty nine innings and hasn’t allowed an earned run.
The win raises St. Vincent’s record to 20-4 and the league championship is their sixth in a row, which includes a co-championship in the first two years.
Sonoma Academy finishes the regular season 16-4.
Both teams will be in the North Coast Section Division 5 playoffs.
There is one game to go in the championship weekend. That is in NCL I softball game between Cloverdale and Clear Lake. The two teams tied for the NCL I league championship and this is for the automatic berth for the North Coast Section playoffs, which are being picked on Sunday. Both teams will make the playoff; Cloverdale is a Division 4 team, Clear Lake in Division 5. Today’s game is in Clear Lake at 4 pm.
My email address is jacpasquini@comcast.net