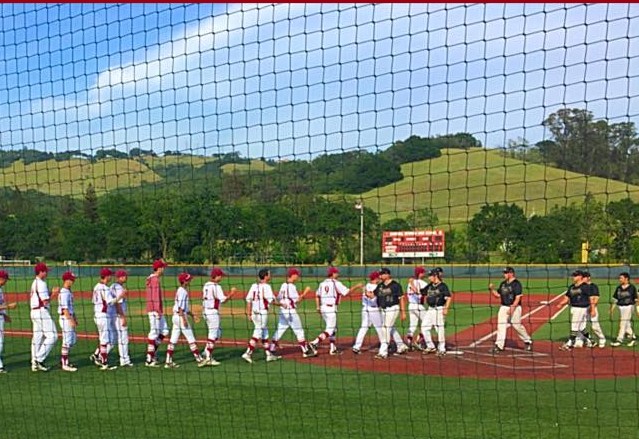 If you are a sports fan, you probably heard the talk or knew of the big pitching matchup between the Giants and Dodgers on Wednesday Night.  You know, Kershaw vs. Bumgarner, the first time ever the MVP of the league went against the MVP of the World Series.  That pitching duel turned out to be a good one, but it wasn’t as good as the pitching duel  at Cardinal Newman a few hours earlier.
A pair of seniors, Cardinal Newman’s Michael Clark and Maria Carrillo’s Zach Scott, put on a show.  One pitch, very early in the game, was the difference as Cardinal Newman edged Maria Carrillo 1-0, a result which puts some suspense into the NBL Baseball race and sets up a huge game that starts the second half on Friday.
The one pitch was thrown by Scott to Colin Imm with two outs in the first.  It was a 1-0 pitch that the junior hit over the left field fence, which not only was Imm’s first varsity homer, but produced the only run.
Outside that pitch, you could make the case that Scott outpitched Clark, although that would be like comparing apples and oranges.  After the homer, Cardinal Newman had four base runners the rest of the way, one on a walk right after the homer and the other three singles.  None of them reached second base.  Two of the singles came in the sixth inning, and both those runners were picked off.
The game had very few scoring chances. Maria Carrillo had the only runner of the game reach third with two outs in the first.  In the fourth, they had a runner thrown out at third on a bunt attempt for the second out of the inning.  That was the only other time they had any chance to score.  They had two other runners on in the inning, including the batter who laid down the bunt.  After that, Clark retired thirteen of the last fifteen batters he faced.
Maybe the most startling stat in such a pitching duel was that the two teams combined for one strikeout.  The stats for the two pitchers were almost identical, even to the point that Clark threw 73 pitches, which was one more than Scott.
It has been a while since Maria Carrillo has lost a league game.  The last one was on April 19th, 2013 when they lost at Casa Grande 2-1.  Since then the Pumas won twenty six straight league games.  Cardinal Newman is actually the last NBL team to beat Maria Carrillo.  That was about a month later, on May 15th in the first round of the NBL post season tournament by a 3-0 score.
What this game does is turn the race into a dogfight.  At the halfway point, Maria Carrillo and Casa Grande are tied at 6-1, with Cardinal Newman one back at 5-2.  Cardinal Newman’s league losses are to Casa Grande and Ukiah, who is 4-3.
Casa Grande moved into the tie with some pretty good pitching of its own, which is starting to become normal.  Jon Christy and Jack Hill combined for a three hitter in a 2-0 win over Rancho Cotate.  It raises Casa Grande’s winning streak to seven and it was its third straight shutout.  Maria Carrillo has given up 14 runs in the seven league games, nearly half of that was in a 15-6 win over Montgomery.
Casa Grande scored both of its runs on RBI singles by Spencer Torkelson and Austin Garatti.
The second half starts on Friday and the headline game is Casa Grande at Maria Carrillo.  In the first meeting, Maria Carrillo scored all its runs in the sixth to rally from a 2-0 deficit for a 4-2 win.
That score might be as low scoring as this game will be.  As impressive as Casa Grande giving up 14 runs in seven league games is, Maria Carrillo has given up 13.  Five of those were against Windsor in an 8-5 win, four of those in the bottom of the seventh.
On Friday, Cardinal Newman will be at Rancho Cotate.
My email address is jacpasquini@comcast.net
Share