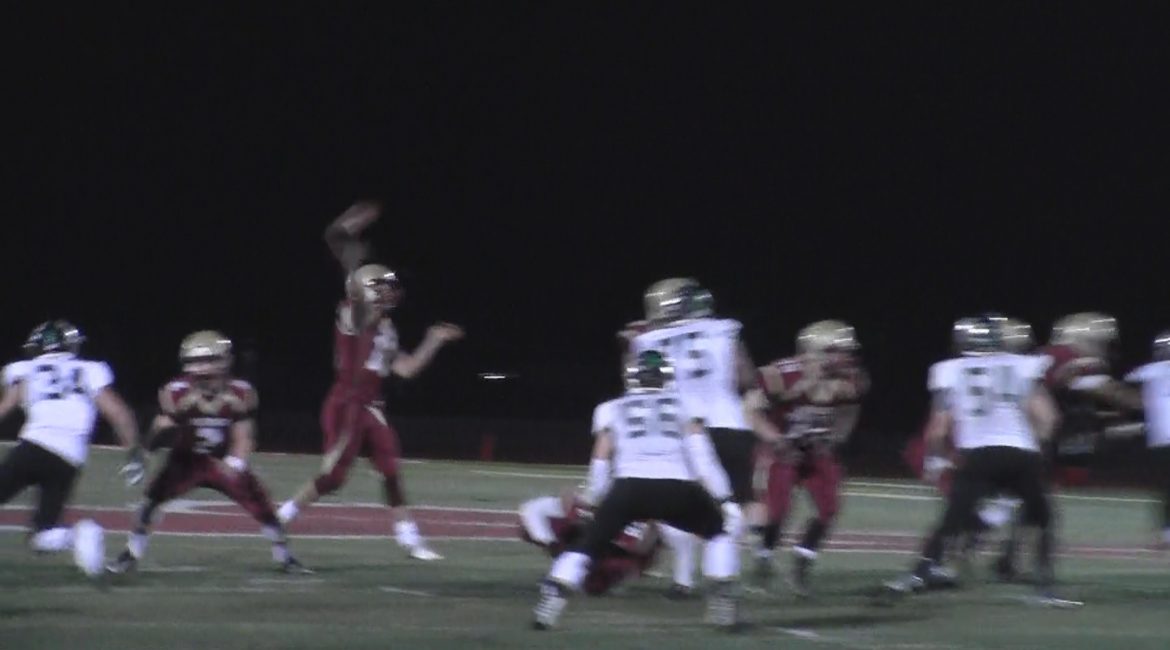 Cardinal Newman arrived at the Division 4 Championship game at Rancho Cotate HS as heavy favorites, just stomping opponents left and right in the regular season and playoffs. But they faced a daunting foe in the St. Bernard’s Crusaders Saturday night, who erupted for over 70 points twice in these playoffs. But it was the #1 seed Cardinals’ defense who would shut down the Crusaders, winning easily 44-21 to hoist the championship plaque.
The Eureka team drew first blood when quarterback Jack Rice slinged it deep downfield to hit Isaac Drake in stride for a 60-yard score; the extra point no good. But it was then that the Cardinals would unleash a 44-point onslaught, as a shifty run from Tanner Mendoza brought the offense inside the 2, where QB Jordan Brookshire kept it himself and smashed his way through the stack-up and over the goal-line; their point-after also no good.
A Jalen Dural fumble recovery gave Newman tremendous field position, and quickly near the goal-line, Brookshire plowed his way through for another short TD run. Their next possession saw Brookshire fake the throw and take it himself through a big seam in the defense, make two men miss, and bully his way into the endzone for the 24-yard score, taking a slew of Crusaders in with him. It was 20-6 Cardinals at the end of 1.

Following a St. Bernard’s failed 4th down conversion, star wideout Damian Wallace scorched his defender on an out-route to haul in a 33-yard pass from Brookshire, as the Cardinal crowd went into a frenzy. Some fabulous defensive plays to force empty Crusader possessions, as Wallace and Mark Boschetti swatted away shots into the endzone, while Jack McElderry laid a huge sack on Rice. Jack Murray was then sent out to try a 44-yard field goal, which skied high in the air with plenty of distance before falling just inches over the bottom crossbar, pushing the Newman lead to 30-6 at halftime.
Brookshire kept his foot on the gas to begin the 3rd quarter, connecting with Kyle Carinalli with a beautifully placed ball in the corner of the endzone for another touchdown. Chauncy Leberthon joined the action by corralling a bomb from the senior quarterback with about 10 yards between him and his chasing defender, catching it in stride and running free into the endzone.
St. Bernard’s made it respectable late, however, as Isaac Drake received the screen pass, got a key block, burst it up the sideline outrunning everybody, and dove for the pylon amidst a Cardinal tackler. 69 yards to the house on that play, as Drake caught the pass over the top for the 2-point conversion. A following onside kick recovery allowed Rice to loft a 50-yard pass placed right into the hands of a streaking Bryce Gratz for another touchdown to make it a 44-21 final. But Newman’s 44-point barrage proved that this game was never close, and ultimately, that these Cardinals were in a class of their own.
Jordan Brookshire finished with 189 yards passing and 82 rushing, accounting for five total touchdowns. The journey does not end with an NCS title though, as head coach Paul Cronin has his team’s eyes set on a state championship. This team truly might be one of the best (if not the best) Cronin has ever assembled during his prolific Cardinal Newman tenure.
Share
Copyright (c) 2016 Splash.
Theme by StylemixThemes.