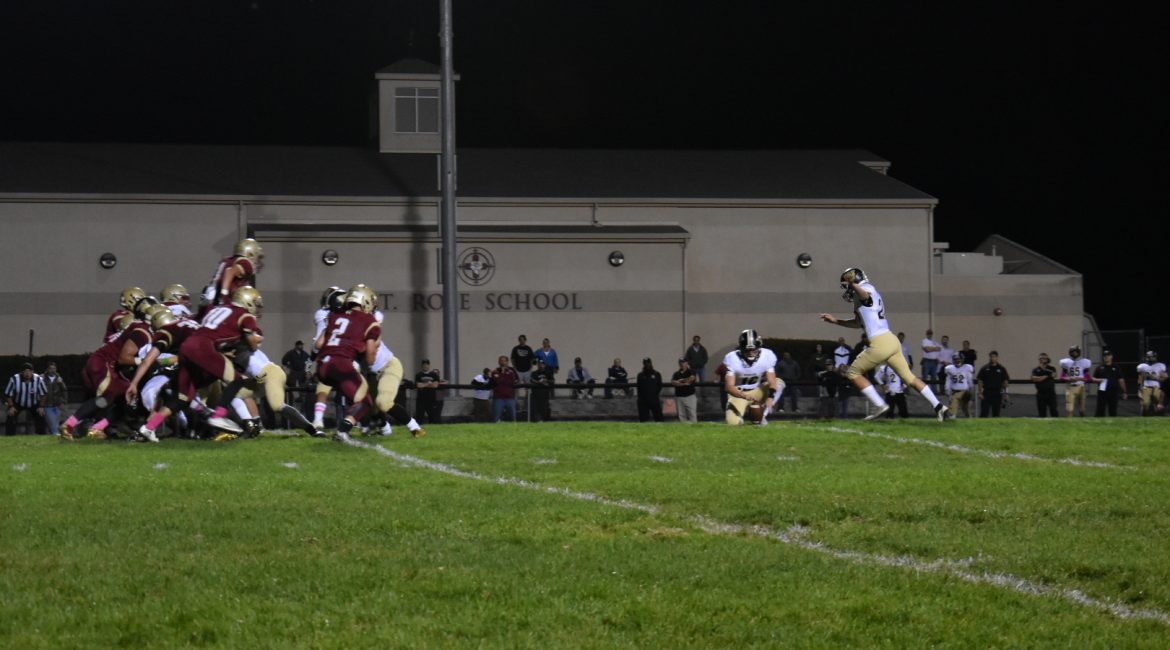 Windsor go off to a slow start, punting on every one of their 1st quarter possessions, while Newman would capitalize and seize momentum early. Running back Tanner Mendoza capped off a convincing drive down the field with a three-yard TD run for the game’s first score. He headlined their next possession by breaking several tackles for huge yardage on a run up the sideline. This set up the Cardinals QB Jordan Brookshire, as he faked the handoff and ran with it himself, beating the Jaguar defense to the outside to make it 14-0 and put Newman in the driver’s seat.

But the always-explosive Jaguar ground game would eventually break its silence, as their quarterback Kobe Roman got things going with a run of 40+ yards on their next possession. Quickly into the redzone, Jackson Baughman would take the handoff and find a hole in the defense, squirting four yards through the line and free into the endzone to make it 14-7. The Cardinals would counter by repeatedly handing it off to Mendoza on the next drive, as he pounded the ball upfield. Jack Murray knocked in a 33-yard field goal to make it a 17-7 ball game with 5:26 left in the 2nd quarter.

Then Windsor RB David Escarsega would get tackled on a running play, but rolled over some Cardinal tacklers, and fumbled the ball but alertly Patrick Tappin picked it up for the Jags and proceeded to race upfield before finally being forced out inside the 5-yard line. Some of the players had stopped in their tracks thinking that the play was blown dead, but there was no whistle. Escarsega would punch it in two plays later.  Windsor was only down by 3 and had a little momentum.


Brookshire took matters into his own hands with numerous QB keepers for big chunks of yardage to keep the chains moving; the fancy footwork on display as he evaded tackles left and right. He’d finish off the next drive by handing it off to Kyle Carinalli who made one man miss, and then spurted into the endzone with less than a minute left in the first half.

But the Cardinals were not done just yet. Dino Kahaulelio laid a big hit on a pressured Kobe Roman, forcing him to fumble, while Jake McElderry snagged the ball as it hung in mid-air, handing possession right back to Newman. On the very next play, Brookshire fired it deep downfield to Carinalli who had a step on his man on coverage, connecting for a 45-yard TD completion. Despite a botched extra point attempt, the score was now 30-14 Newman within a matter of seconds.

The tandem of Brookshire and Mendoza opened the second half taking turns running the ball, dismantling the Jaguar defense relatively easily on their way down the field. It was the quarterback who would score on this trip, as Brookshire took the snap, bulldozed his way forward, and pushed the pile six yards in for the touchdown.

Following another Roman fumble, Brookshire would throw a laser 23 yards down the middle and hit an open Sammy Brossard in stride, pushing the lead to 44-14. After a Jaguar three-and-out, Newman’s Damian Wallace would return a punt all the way back to the Windsor 5-yard line. Mendoza put the icing on the cake, taking the pitch to the outside and rumbling into the endzone once more.

The Cardinals continue their dominance in the North Bay League, staying perfect at 5-0 and rolling to a 7-1 overall record. Windsor will now gear up to host Casa Grande next week, while Cardinal Newman will face off against an explosive Santa Rosa Panther team, led by do-it-all quarterback Isaiah Steele.
Share