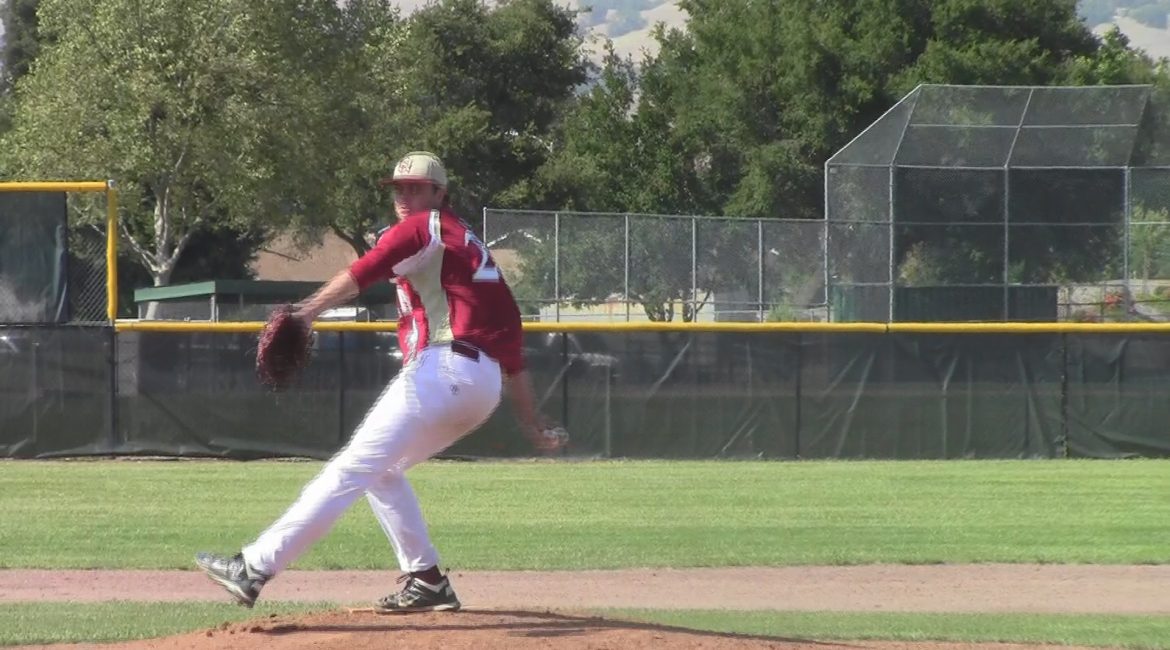 Casa Grande defeated Cardinal Newman 9-3 in the second round of the NCS Division 2 playoffs.   When seeing that score you might assume that the No. 1 seed put on a dominating offensive show and won easily.

You would be wrong on both accounts.

Casa Grande’s fourth win in five games against Cardinal Newman this season was by far the most one sided final score.  But it was a game that had two different themes.

The first half was all Cardinal Newman, who took the lead in the first and were one hit away several times of putting the No. 1 seed and NBL champions in deep trouble.

Then they played the second half of the game.

As they have done all year, Casa Grande came up with the big hits to turn things around.  This time they go some help from the baseball gods, as harmless looking ground balls turned into adventure after adventure until the game was out of control.   From a bad hop ground ball single, that started a three run rally which officially turned the game around, to a bases loaded infield single that drove in two runs in an inning that put things away.

Cardinal Newman didn’t waste any time taking the lead.   They had a run in the first before the first out.  An RBI single by Richard Clark gave them a 1-0 lead.  Then immediately after one of the themes that would have Cardinal Newman thinking,” what if?” showed up.    They had the bases loaded and no out and could only get one more run out of it.

That was a theme over the first five innings when Cardinal Newman left ten runners on base, including also leaving the bases loaded in the fifth.

By then the faithful inning that turned the game around had occurred.   Cardinal Newman took a 3-1 in the bottom of the fourth, when the roof caved in on them.

You knew Casa Grande would make a run, they have all season.  The inning started when Iggy Llorence hitting what looked like a routine ground ball to short.  This is where the baseball gods stepped in.  The second hop hit something.   Maybe it was a rock, maybe it was Baseball Angel dust.  It ricocheted and ended in left field for a single.  On the next pitch Nate Bills was hit by a pitch, which was followed by a walk to load the bases.

To recap, a bad hop single, a hit batsman, a walk and Casa Grande was in business.

At first Cardinal Newman dodged a bullet, getting a force at the plate on a ground ball to third.   Then Casey Longaker then hit a sacrifice fly on a 3-2 pitch to cut the lead to one.   It was part of a big game for Longaker who also had two hits, a walk, scored a run and had the RBI.

Still Cardinal Newman was one out away from keeping the lead and couldn’t get it.  Tyler Moore hit a seeing eye single through the hole between first and second which tied the game on a bang bang play at the plate.   Francis Christy followed with a line drive off the second baseman glove to drive in another and when the damage was done Casa Grande had a 4-3 lead.

Then came the fifth which Cardinal Newman left the bases loaded.    That would be its last threat.

Casa Grande put things away in the sixth with five more runs.  It was a rally that only one ball got out of the infield and was ended on the two run infield single.  With the runners going on a 3-2, two out pitch, Charlie Parnow hit a slow roller up the middle.  The play was made at first which was too late and Llorence, who started the play at second didn’t quit running until he scored.

The game was stabilized by Lefty Eric Parnow who pitched four shutout innings in relief to get the win and raise his record to 6-0.  He retired seven of the last eight he faced, the first of that streak was leaving the bases loaded in the fifth.

As for Casa Grande the remarkable season continues.  They are now 26-2 on the season and move to the NCS semi-final game where they could see another NBL opponent.  That will be decided today when No. 5 College Park is at No. 4 Maria Carrillo at 1 pm.  The winner will travel to Casa Grande on Wednesday.

So the team that ended up No. 1 in the YSN365.com final baseball rankings move on.

So did the No. 1 softball team.  Petaluma won a tense game doing all it’s scoring in the sixth to take a 2-0 win over No. 8 Livermore.

Joelle Krist hit a single to drive in Meghan DeCoite, who started the sixth with a double.  Petaluma scored another run on a Livermore error.

The way Dana Thomsen was pitching the one run was enough.    She pitched another outstanding game, giving up three hits and striking out eight to raise her record to 18-1.

Petaluma, who is 27-1 on the season and the No. 1 seed in Division 2, will meet the winner of the Pinole Valley-Concord game which is today.  That game will be Tuesday afternoon in Petaluma.

One other league champion was in action.  That was the St. Vincent softball team who took a 10-0 win over St. Joseph Notre Dame.  Ursula Baumgarten led a ten hit attack with four hits, which included a double and drove in four.  Hannah Sarlatte pitched a three hitter and has won four straight decisions to raise her record to 9-5.

On the Saturday schedule four league champions are in action.  In baseball SCL champion Analy and NCL II champion St. Vincent has a home game.  As for softball NCL I Champion Maria Carrillo goes on the road, while NCL I champion Cloverdale is at home.

Tomales will meet the winner of today’s game between No. 3 Ferndale and No. 2 Pt. Arena.   The game was rescheduled from Friday because of umpire issues.   Today’s is scheduled to start at noon in Point Arena.

No. 3 Ferndale at No. 2 Point Arena…noon…reschedule from Friday