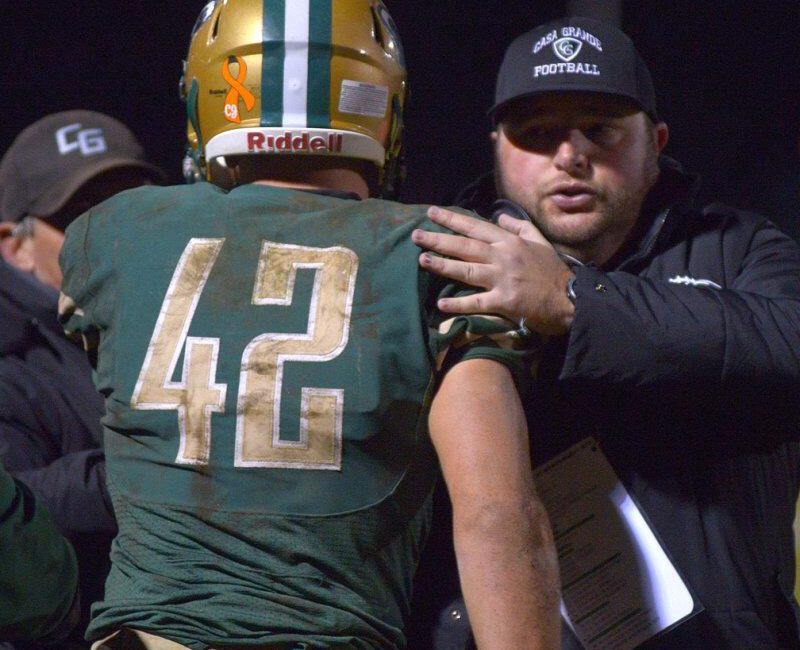 When you begin the high school football season it is a given that the Casa Grande football team will be good, the question is how good.

The 2013 Casa Grande team has raised the level of any team the school has had in history.   They are entering the territory of one of the best teams in area history.

It was almost like they yelled to everyone here we are.   It was the Gauchos most one sided win of the season.  They dominated the second half scoring 31 points.

With Eureka coming off a 3-6 season, the value of the win wasn’t that hot at the time.  The value went up as the season went on as Eureka ended the season 9-3 made the Division 3 playoffs.  They lost in the second round to Marin Catholic 49-14.

This one was as close to a loss as they had all season and the most uninspiring win. Heritage, who is a Division 1 team and had a brutal schedule, finished 1-9.  They started the season against Campolindo, Casa Grande and Marin Catholic teams that all finished the regular season undefeated.

It was the only game of the season that Casa Grande went into the fourth quarter behind.  Porchivina scored the winning touchdown.  Casa Grande hasn’t scored under 30 since.

This game has taken the place of the Montgomery pre-league game.  The two teams are annual playoff teams, with Napa in the Sac-Joaquin Section.

John Porchivina rushed for 109 yards and two touchdowns and was team leading tackler with eleven.

Casa Grande is ranked No. 1 in the first YSN365.com ranking, a spot they would hold the rest of the way.

This was the NBL opener between two 3-0 teams.

Casa Grande did what they would do throughout the season and that is dominate a portion of the game that would be the difference.

In the NCS Semi-Final game two months later between the two teams it would be in the second half.  In this game it would be the first.

Casa Grande had a 21-0 lead midway through the second quarter.  Lawson ran for three touchdowns and threw another.   One of the touchdowns was an 89 yard run late in the first quarter to make it 14-0.  Lawson rushed for 176 of a season high 188 yards in the first half.

Four second quarter touchdowns broke a scoreless tie.   It is the only shutout of the season for Casa Grande.

The 5-0 start was the best in school history.

Miles Gardia returned a fumble 45 yards to give Casa Grande a 14-6 lead.    It was one of five fumbles Casa Grande recovered.

Every game since they scored at least 40 points.

After a tight three quarters, Casa Grande scored the last 24 points of the game.  Lawson threw three touchdowns passes and also scored on an 80 yard run.

He also passed for a season high 241 yards.

The score was 21-13 with six minutes left when on a fourth and five play, Lawson hit Jonathan Weber for a 35 yard touchdown pass.   Three plays later, Brad Freitas returned an interception for a touchdown to put things away.  The interception was one of a team tying high four on the season for Freitas.

Four second quarter touchdowns broke a 7-7 tie.   For the second straight week Lawson threw three touchdown passes.   He was in the middle of a streak of throwing that many in four of five games.

The win clinched a tie for the North Bay League Championship.

This wasn’t your typical Casa Grande game because it didn’t have one dominant moment that put things away.  Casa Grande jumped out to a 14-0 first quarter lead and the rest of the way the teams traded touchdowns.

Casa Grande had its biggest offensive night of the season with 518 yards of total offense.   Most of that was by Porchivina, who rushed for 301 yards and three touchdowns.   It is the biggest rushing game in Casa Grande history, breaking a record that Joe Trombetta set in 2003.

There was some defense in the game.  For the second time of the season Daniel Greisen had a three sack game.

Also in the game, JaJuan Lawson intercepted one of his two passes of the season.

Lawson threw three touchdown passes and Porchivina rushed for two more and caught one of the touchdowns passes.

The game had its weird aspect in that the first and third quarter was scoreless and Casa Grande outscored Cardinal Newman 20-14 in both the second and fourth quarter.

Lawson had over 200 yards in total offense in the first half.  Porchivina had over 100 yards rushing in the second half.

The following Sunday it was announced that Casa Grande was the No. 1 seed for the North Coast Section Division 2 playoffs.

Casa Grande led 45-0 at the half.  Lawson and Porchivina each rushed for over 90 yards.

Three offensive plays into the game, Lawson had a 64 yard touchdown run and a 74 yard touchdown pass to Porchivina in a game that might have topped the Alameda performance.

Lawson had 298 yards in total offense and three touchdowns.

Casa Grande offense really liked the Windsor matchup.   Twice they went over the 500 yard mark in a game and both were against Windsor.   In this game they rushed for a season high of 374 yards.

Casa Grande raised its record to 12-0, the first time in school history that they hit the twelve win mark.

In the first meeting Casa Grande jumped out to an early big lead and coasted.  This game was a dominating second half.

In between the defense didn’t allow a first down.

Porchivina, who had taken the first play of scrimmage 72 yards for the first score of the game, put an exclamation point on the game by intercepting a pass and returning it 80 yards for the final score.  With all his offensive numbers, Prochivina was second on the team in tackles, sacks and it was his third interception of the season.

This is the third NCS championship game that Casa Grande has made.   In the first two they met dominating undefeated teams.

The following year the team was Montgomery, which may have been Jason Franci’s best team.  It was 10-10 game in the fourth quarter before dropping a 23-10 win.

This year they go into the game going for its first ever NCS championship as the undefeated dominating team.

Coming soon how Miramonte got here